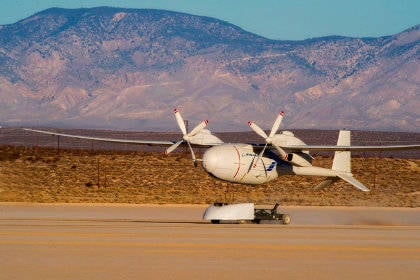 The US aircraft manufacturing concern Boeing received a contract from the United States Missile Defense Agency (MDA) to test a special payload on the Phantom Eye advanced hydrogen unmanned aerial vehicle. As reported by Flightglobal, the amount of the transaction amounted to 6,8 million dollars. What kind of payload in question is not specified. Presumably, these could be systems for detecting various types of missiles.


The first flight of a hydrogen-powered drone took place on 1 June 2012 of the year. To date, the unit has completed three test flights and is currently preparing for the fourth. According to Boeing, MDA equipment will be installed on the Phantom Eye and tested during the fifth flight, which will take place before the end of 2013 of the year. In total, the drone during the test program must perform eight to nine flights.

Phantom Eye is the first of its kind unmanned vehicle operating on liquefied hydrogen. The wingspan of the drone is 45,72 meter. Phantom Eye is capable of flying at altitudes up to 19,8 thousands of meters and reach speeds of up to 278 kilometers per hour. A drone can take on a payload with a total weight of up to 204 kilograms. According to Boeing, several departments are interested in this development.
Ctrl Enter
Noticed oshЫbku Highlight text and press. Ctrl + Enter
We are
Project of the shock-reconnaissance unmanned aerial complex "Sokol" (Ukraine / Poland)The company Boeing received money to create an aircraft Phantom Swift
Military Reviewin Yandex News
Military Reviewin Google News
40 comments
Information
Dear reader, to leave comments on the publication, you must sign in.