Do so that did not work, as always 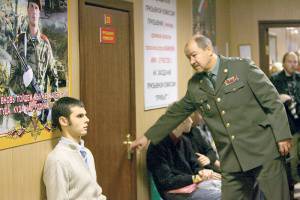 
The last three to five years in the military department there have been so many different changes in the organizational structure of staff, personnel decisions, and also proposed so many different innovations that were not carried out deliberately and quickly, that many thought about, and whether such reforms are needed at all? Essentially, the basic rule was ignored, suggesting that any structural and other changes in the military environment should not only improve the daily life of the troops, but the main thing is to significantly increase the combat readiness of units and subunits. Unfortunately, this was not always the case. That is why the new leadership of the Ministry of Defense much of what has already been done in this direction and did not find a real improvement in the troops, cancels and brings back to life the organizational structure of the connections, the forms and methods of leadership that have been tested for decades.

Today, who does not advise the Ministry of Defense. It seems that the remaining supporters of the dismissed minister, even those who are distant from the army, make no less effort to surprise and convince the new head of the military department and the country's leadership in the expediency of their adoption with a variety of proposals.

In this publication, only two such proposals are offered for consideration, which have recently been received from the leadership of a number of higher educational institutions and accepted for elaboration by the Ministry of Defense. Currently, they are already actively discussed in the media and society.

First of all, it concerns the passage of military service by the call of students of higher educational institutions who prepare reserve officers in military departments. Of course, the need to change the format of training officers in military departments in universities was long overdue. Especially in view of the currently established opinion in society that training in military departments in a number of universities is nothing but a legal evasion of a military duty, and even with such a privilege as conferring an officer's military rank. In the current state of affairs in ten years the question will arise, but do we need such officers, who saw the soldier and sergeant only in the living conditions, commanded them and exploited complicated military equipment only theoretically?

That is why the change in the existing system of training officers in the military departments of universities should be reviewed. However, it is necessary to approach this not only taking into account the financial capabilities of the state, but most importantly, taking into account the real life of the troops, without disturbing their planned combat training, without reducing the combat capability (combat readiness) of military units and subunits. At the same time, after all, realizing that the customer for the training of these specialists is the Armed Forces of the country.

ONE LEG IN UNIVERSITY, SECOND - IN THE ARMY

The way in mass media discussed today, where every year, for three years, for three months, students of military departments will do military service in military units in specialties prepared in the departments, just does not take into account the main thing - what will it give for improvement ( ) the combat capability of those parts where they will be prepared? But this is a matter of real combat readiness of the troops, and not a virtual computer game.

Such training in the student troops cannot but affect the combat readiness of the units where they will serve. First, it will not be possible to appoint all of them to positions in the specialties due to the fact that these positions for which they are trained in the departments are mainly in the army held by officers, warrant officers or sergeants with military service experience. Placing them in the positions of soldiers defining combat readiness in constant-readiness military units is also impractical because after three months of service they will return to study, and the vacant full-time posts will be vacant until the next military recruitment period (spring, autumn), and this is a significant decrease in the combat readiness of the unit . Under the option of staffing with subsequent batches of students, this military unit will practically become a training unit with completely different tasks. It will have to create at the expense of combatant units. Moreover, staffing new divisions with the best junior commanders from the units of constant readiness, which the troops are not rich in anyway.

In addition, the cost of implementation of this proposal will increase significantly. After all, before each shipment to the troops, they (and this will be three years in a row) will need to carry out a follow-up medical examination, since during each subsequent year he may get sick or there will be other reasons that may prevent his three-month service.

The cost of their transportation will increase several times. Problems will arise with the military uniform (considering that a significant part of the students live in dormitories). But you never know what can happen in three years, when a student will no longer be able to go to a military unit.

At the same time, it is necessary to establish that the military rank of reserve officer should be appropriated only after completion of training at the military department and undergoing military service by conscription.

The proposed option preserves the equality of all citizens of military age under the Law on Universal Military Duty, will actually improve the quality of training of future officers, as well as increase the base of recruitment. In addition, these citizens will be given the opportunity to go through military service in all military units of ministries and departments, where the law on conscription military service by conscription and already in the army to become junior commanders, gaining experience with personnel.

Legislative consolidation of this proposal will also significantly increase the basis for selecting the Armed Forces of the most competent, trained in universities and practice in the army of officers as platoon and company commanders. In this case, there will be no need to find additional financial resources and strength for the creation of separate military units (essentially training ones) to train reserve officers there.

As for increasing the motivation of university students to study at the military department, it is possible to study the issue of financial supplements to them during their studies. One of the proposals on this issue could be a cash surcharge from the Ministry of Defense in the amount of 20 – 30% of the monetary support of cadets of military schools. It is possible to work out other preferences and benefits.

In addition, university students after the end of military service by conscription, regardless of previous academic performance, availability of academic arrears, must grant scholarships from the moment they are returned to educational institutions, and nonresidents must be provided with places in hostels. Rectors of universities are obliged to ensure the prompt resolution of all issues related to the continuation of studies of these students and the creation of adequate living conditions for them. Allow university rectors to set terms for the elimination of academic debts to students who have served individually within one year.

In my opinion, it is precisely the adoption of such a format of training in military departments will be most fair for all the young men of our country who are preparing to fulfill their constitutional duty to protect the Fatherland.

As for the other proposal - the creation of scientific companies, then it seems to me that such a decision has no prospects for practical implementation, in any case, as it was intended or in the way it was reported to the country's leadership. It's simple - the idea was born and run to implement it. Theoretically, maybe everything is not bad, but from the practical side it is completely incomprehensible what a graduate of a higher education institution can give, even if he is extraordinarily talented for a year of military service in some military-scientific association or laboratory? In the best case, he will be entrusted with something of little importance, which is not related to the actual development of any project. And how could it be otherwise, because these research centers are working on the defense of the country and their developments constitute a state secret. It turns out that in a few years about these little-known organizations, laboratories will know a very large number of university graduates who have served there, perhaps in quantitative terms much more than the staff of this institution. It seems that this will not contribute to preserving the secrecy of the developments that are being created there.
By the way, all the most promising students from the 2 – 3 courses come to the attention of the scientific community of institutes and many of them are involved in certain scientific research, and after graduation they are invited to work in these research institutes and laboratories.

In my opinion, these guys should be selected for defense research institutes by students with entering into any contracts with them, gradually attracting them to small projects, offering for the future any prospects for engaging in scientific developments and assistance in living arrangements. After all, this is a special category of people and they should be treated with special tact and respect. Otherwise, nothing good will come of it. They, poor fellows, get rid of it, it is not clear in what capacity a year - that’s all the benefits from them.

In Soviet times, and even in the middle of 90, as a definite preference, all specialists with higher education working in defense enterprises, military research institutes, and laboratories were granted a deferment from military service for the duration of their work until 27 these institutions. After working for several years, most graduates remained there to work forever. Perhaps this is one of the alternatives to the decision, which is real and practically does not require significant costs.

Ctrl Enter
Noticed oshЫbku Highlight text and press. Ctrl + Enter
We are
About Stalin and KhrushchevWhat you didn't want to know about England
Military Reviewin Yandex News
Military Reviewin Google News
20 comments
Information
Dear reader, to leave comments on the publication, you must to register.