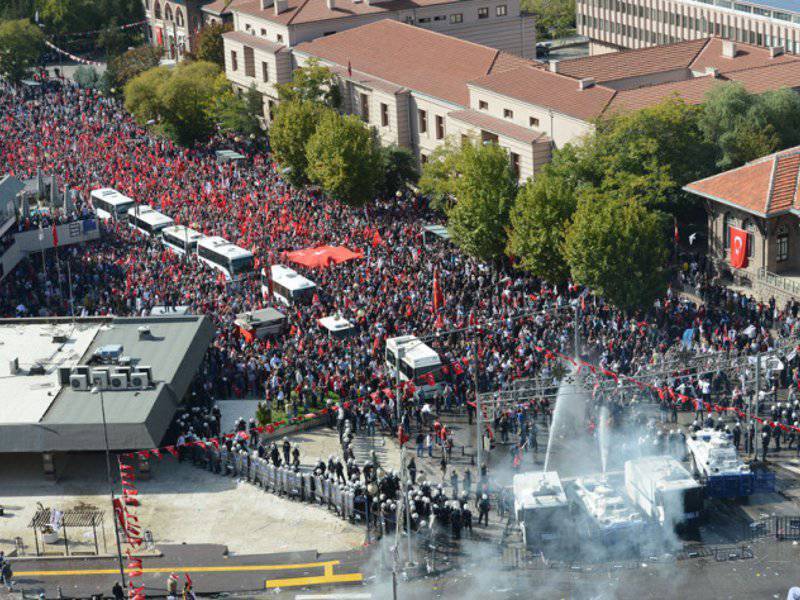 The population of Ukraine has been in a state of apathy for several years now. Although at first glance it may seem that this is not so, because some segments of the population are very aggressive in expressing their displeasure with the authorities. However, the majority of Ukrainians have high hopes for the presidential elections to be held in 2015 year. But the government, instead of approaching the election campaign fully armed and earning points, not only does not address the most pressing social issues, but also appears to have taken a course on unpopular and more stringent measures, hoping that help force will be able to keep the situation under control.

Among such unpopular measures, first of all, we can mention the increase in prices for utilities (gas and electricity), the abolition of tax benefits and the increase in tax rates for private entrepreneurship, the establishment of control over the payment of 15-interest tax on remittances (i.e., money, which Ukrainians working abroad send to their relatives in Ukraine), the introduction of taxes on the sale of home appliances and mobile phones and holidays abroad.

All these innovations can not please, and even more so to satisfy ordinary Ukrainians. In addition, the Ukrainian parliament last week failed to vote for bills on the abolition of privileges for deputies and government officials, and the denunciation of documents that make it possible to transfer Ukrainian capital abroad without paying taxes. Voting was initiated by opposition forces.

This behavior of the authorities is due, according to analysts, several main reasons. So, for example, according to Igor Zhdanov, the head of the Open Policy analytical center, the authorities are trying to replenish the treasury by all means, but the final result is that this is not due to the most affluent population, but due to ordinary citizens, who already barely have enough money to make ends meet. There is practically no small business in the country, but for that small number of entrepreneurs who still managed to keep afloat, the government is preparing new taxes. Thus, according to the expert, sooner or later we can expect that the people will not survive and an explosion will occur.

The worst thing in this whole situation is that the Ukrainian government does not want or pretends that it does not see how things are actually in society, what problems exist in it. So, in particular, the head of state V. Yanukovych, who said that the worst times for the Ukrainian economy are in the past, was recently noted. Another striking example is the document that is currently being prepared by the government - a forecast of the country's social and economic development for the year 2014. According to this document, from next year the Ukrainian economy will enter a phase of active growth. And this is at a time when international financial institutions (the IMF and the World Bank) say that the Ukrainian figures for the current year have deteriorated significantly. According to the director of economic programs of the Center named after Razumkov V.Urchishin, international observers are more likely to be right in this issue than Ukrainian specialists. Expert confidence is based on the following facts: over the past few years, GDP growth in Ukraine has been close to zero, and the situation in foreign markets, to put it mildly, is not very favorable for the country. In addition, you can not count on the influx of foreign investment, which was spoken about by the government, because investors always prefer to wait a little on the eve of the elections so as not to lose.

The Ukrainian population is also in a state of expectation, hoping that after the 2015 elections, the situation in the country will change for the better. This is evidenced by the results of numerous surveys, which are periodically held on the territory of Ukraine. According to the results obtained, for three-quarters of Ukrainians, the reduction of the property gap between the social strata is of primary importance; half of the country's residents are convinced of the need for change in the system of power.

At the same time, experts note that if the Ukrainian authorities hope that after the elections they succeed in suppressing possible protests by force, then they are mistaken. The fact is that the population of the country has ceased to trust not only the authorities, the opposition forces and the judicial system, but also representatives of law enforcement agencies. This is also evidenced by survey data. So, according to them, more than 30 percent of the population do not trust the police at all, about 35 percent - they trust, but not always, almost a quarter of the residents could not decide on the answer and only the 1 percent of the country’s citizens trust the police. According to experts, in such a situation it makes sense to talk about a complete lack of confidence in the state. And this, in turn, may indicate that if a rebellion breaks out in the country, it will be of a bloody nature.

At the same time, most experts believe that the Turkish scenario cannot be repeated in Ukraine. Thus, according to Vladimir Kornilov, a political scientist and director of a branch of the Institute of CIS Countries in Ukraine, the Ukrainian population is increasingly plunging into political apathy. After all the expectations that arose during the so-called “Orange Revolution” were broken, the Ukrainians no longer want to speak either for or against anyone. At the same time, there are more people in the country who want to rally, rebel, hold protest rallies (compared to 2004). Kornilov notes that certain political forces in the state are definitely preparing to repeat the Turkish, Egyptian, Syrian or Libyan scenarios. This, in particular, nationalists and liberal democratic forces, who spread rumors that part of the Ukrainian population is ready to repeat the "feat" of the Turks, actively supporting the rally in Turkey, even though the Communists were the initiators of all the speeches. At the same time, we should not forget that one “color revolution” has recently passed in Ukraine, and world experience suggests that it is almost impossible to spend the second such less than 10-15 years.

According to one of the leading representatives of the Party of Regions, Mikhail Chechetov, his party will do everything possible to prevent a new revolution. In one of his interviews, the politician said that the government completely controls the situation in Ukraine, as evidenced by the unsuccessful protests organized by opposition forces.

Of course, the government still manages to keep the situation under control, but here it must also be borne in mind that while it implements its new technical projects, the opposition can turn into a real force capable of raising the people and taking it to the streets ( but this is only theoretically).

There is one more, no less significant reason that the Turkish version in Ukraine will not be repeated. These are the people themselves. And the matter here is not at all in religion, and not in the fact that there are no trade unions in Ukraine or the population has no experience of strikes and rallies. At a time when people in Turkey believed in themselves, ordinary citizens were able to rise, unite secular and religious leaders, Turks and Kurds, left and right in protests against park development, provide free medical and legal assistance, help with food, in Ukraine still believe in leaders and leaders. In addition, there is a great doubt that there are still people in the country who are ready for nothing, completely free to help others, to unite in a peaceful protest? Unfortunately, as practice shows, there are almost no such people left, and most of the protesters defend someone’s interests almost always for money. A vivid example of this is the events of the Orange Revolution, when people stood on the Maidan, getting a good salary increase, because they believed the person, and not their principles.

The Turks, on the contrary, do not rally for the redistribution of power, they want to respect themselves, and most of Europe respects them. And the Ukrainians, too ...

Paradoxically, even under the conditions when millions of Turks are protesting, their country is not on the verge. It is rather Ukraine on the verge, because it cannot unite even for the sake of what is important for ordinary people. And as long as the country, even if the majority of the population, thinks that the state lacks a “strong hand”, but at the same time doing nothing, nothing will change ... Unfortunately, ...