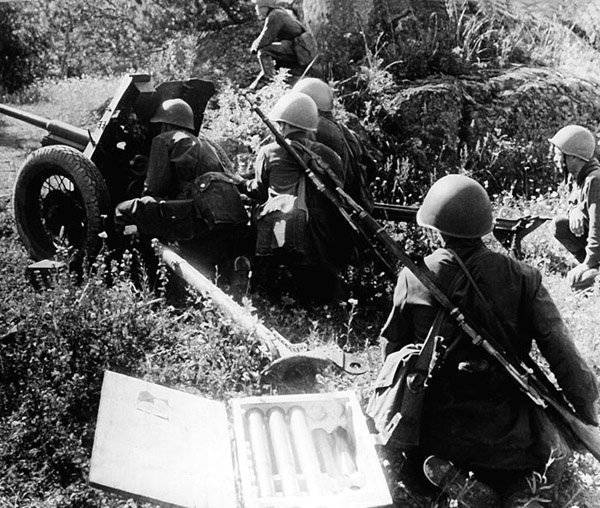 During the Great Patriotic War, anti-tank artillery made its significant contribution to the overall victory over the enemy. Fighters, all those who were supposed to knock out enemy Tanks, very often respectfully called anti-tankers. As one of the participants of the Great Patriotic War, a veteran from Orel, explained: “In each battle they were destined to either stop the enemy or die.” It often happened that the very first battle of the anti-tank crew, became its first and last battle, to resist the German Panzerwaffe with their best optics and powerful armor in the world was not easy.


From military stories it is known that anti-tank artillery appeared immediately after the appearance of tanks, as a means of fighting them. At first it was the usual field guns allocated to combat armored vehicles, and soon a special type of artillery was already formed, this is anti-tank artillery. In contrast to the rest of the artillery, anti-tank guns had a flat trajectory of shooting, a wide angle of guidance on the front, a low silhouette, a protective shield from bullets and shrapnel. A well-equipped, disguised position with earthen parapet and a relatively small weight of the PTO allowed the calculation to quickly change the position.

However, all these advantages of anti-tank artillery were quickly reduced to zero immediately after the start of the battle, even the perfectly disguised positions of the weapons of anti-tank guns were detected by the enemy in a very short time and then the battle turned into a deadly battle between the crew of an anti-tank gun armored weapon in the open area. 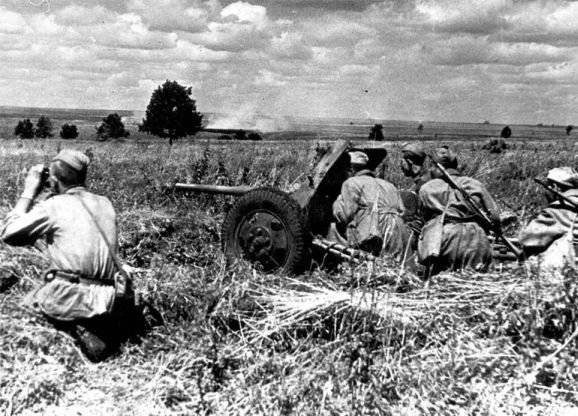 Due to the low height of the gun, the calculation often had to work, bent over, and with small-caliber guns, for example, 45-millimeter guns and generally kneeling. The protective shield only covered the front of bullets and debris from the front, so even an unaimed shot of a fragmentation shell fired from a German tank was practically fatal for calculating VET.

Anti-tankers had to act in battle very quickly and harmoniously, since the range of the direct shot of the anti-tank gun was about 800 - 850 meters. In the course of the battle, in conditions of heavy smoke, constant shelling, change in target movement, the effective firing range was less than the total, somewhere around 400-500 meters.

This distance was a German tank for 2-3 minutes. And if the artillery position was discovered, then the account was already only for a second. Here who will have time to shoot first.

The experience of the first year of the war showed that the use of small independent units as a mobile reserve proved to be the best way to use anti-tank artillery. In this regard, in the spring of 1942, when the anti-tank guns began to come from industry already in the required volume, the first place was the task of organizing anti-tank units in a more rational form.

This is how the special purpose of anti-tank artillery was formed as an easy-to-control rapid reaction force capable of deploying at any firing line in readiness for direct fire from short distances.

The content of a short conversation that took place in the presence of I.V. Stalin, L.P. Beria, G.M.Malenkov and V.M.Molotov is not known, but the next day 1 July 1942 was the People’s Commissar of Defense I.V. Stalin signed secret order No. XXUMX “On the renaming of anti-tank artillery units and subunits into anti-tank and anti-tank artillery units and establishing advantages for the commanding and rank-and-file staff of these units.”

This order read: “In order to improve the quality of the fight against enemy tanks, create and accumulate cadres of tank gunners, destroy their skills and isolate anti-tank artillery units from other types of artillery, I order:

2. To establish to the commanding staff of these parts and subdivisions one-and-a-half, and to the junior commanding and ordinary staff - double salary of content.

3. All commanding personnel of anti-tank artillery units and subunits, up to and including the division commander, should be registered and used only in the specified units.

5. The commanding officer, the junior commanding officer and the rank-and-file composition of anti-tank artillery units and subunits, being treated at hospitals, after curing, should be sent only to the specified units.

6. To install a special sleeve insignia for all personnel of anti-tank artillery units and subunits, according to the attached description, worn on the left sleeve of the overcoat and tunic.

7. Set a bonus for each tank that was shot down in the amount of: to the gun commander and gunner - 500 rubles, the rest of the gun crew 200 rubles.

8. The number of tanks destroyed by the gun should be marked with a number on the tank figure, drawn in the upper right corner of the inside of the cannon shield. The figure of the tank to draw black, and the figure showing the number of wounded tanks, white paint.

9. In order to use anti-tank artillery units to solve the tasks of directly supporting infantry, personnel of these units should be trained not only to fire at direct-fire tanks, but also to fire at other targets from open and closed firing positions. 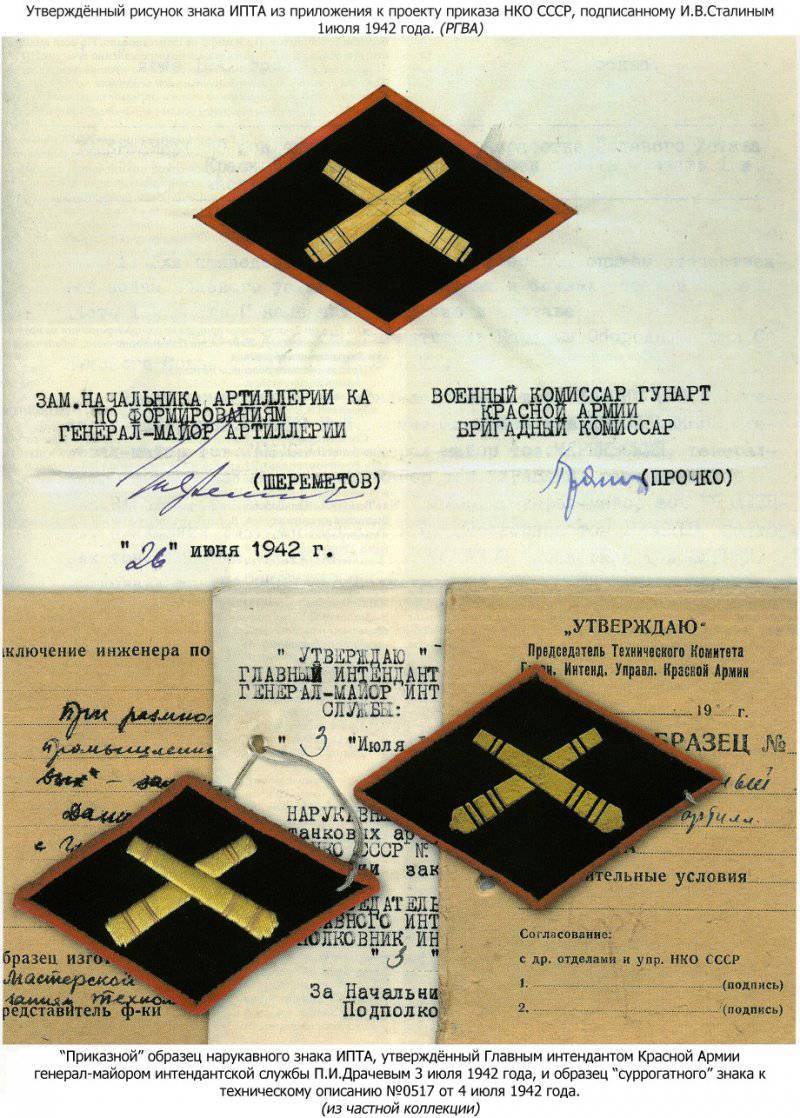 The distinctive sign of the anti-tank was the armlet in the form of a black diamond with a red edging with crossed gun barrels. This sign existed in the Red, and then in the Soviet Army until the 1956 year.

Thus, the fighters and commanders of the IPTA (Anti-Tank Artillery Fighter) became the real military elite of the Red Army during the Great Patriotic War.

If at the initial stage of the war, anti-tankists had mainly only the famous 45 mm VET and PTR of two types, then by the middle of the war, the anti-tank units were significantly enhanced, for example, in the separate IPTAB 34 one regiment (502 IPTAP) was fully armed 76 mm guns, and the other two regiments had on their weapons guns caliber 45-mm and 57 mm. The whole brigade was fully motorized and moved to the Studebaker and Chevrolet cars.

The tactics of applying and the organizational and staff structure of anti-tank artillery units and formations did not stand still and constantly improved.

Thus, self-propelled guns appeared as part of the anti-tank artillery, and by the beginning of 1944, all the fighter-anti-tank brigades had been re-formed all the fighter divisions and individual fighter brigades of the general type.

On 1 January, 1944, in anti-tank artillery, were listed as 50 anti-tank brigades and 141 anti-tank and anti-tank regiment. By the order of NKO No. 0032 from 2 of August 1944, one SU-85 (21 SAU) regiment was added to the composition of the fifteen anti-tank brigades.
However, the actual self-propelled guns received only eight brigades.
At the beginning of 1944, the staff of a separate self-propelled artillery division of a rifle division, consisting of three batteries of four SU-76 each, was also approved.

On 1 January 1945, the anti-tank artillery consisted of 56 anti-tank brigades and 97 anti-tank anti-tank regiments.

These were courageous people, all those who fought at that time in anti-tankists, courageous and modest, this is how Leonid Iosifovich Spiller, a veteran who fought at 502 Umansky Order of Bohdan Khmelnitsky, recalled those times:
“We did not consider ourselves to be bomber. Service in the IPTAP was considered more complicated and many times more dangerous than, say, service in the usual artillery regiments of rifle divisions, not to mention heavy-caliber artillery or rocket artillery, but ... For more than two years, the loss of our regiment was 80 % of the beginning of the forty-third year, while, in the ranks, "of the old men", mostly remained soldiers and officers of auxiliary units, several people from the platoon control and staff. Artillery calculations during this time have changed many times, I remember only one fighter, an elderly Ukrainian, a cheerful man, who held out until the end of the war as part of the calculation. We suffered serious losses in every battle, without exception, but the replenishment to our IPTAP was continuous. All fighters and officers of the battery perceived their service in anti-tankists, in units called “Goodbye Motherland”, calmly, as a given, as their front-line fate. ” 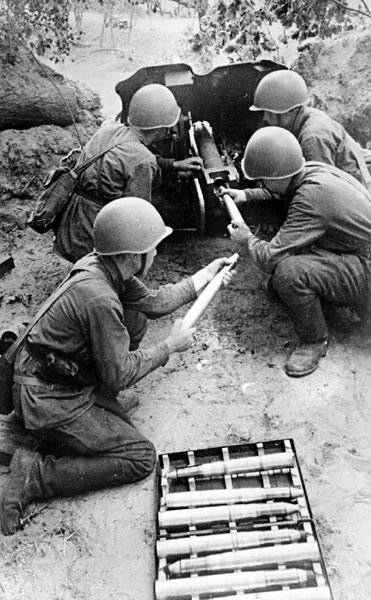 The most productive gunners - anti-tankists