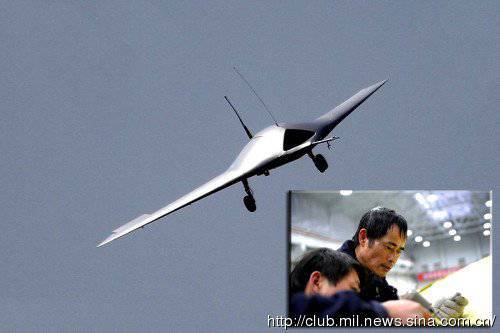 Aviation Aviationist blog reported that China has successfully created an analogue of the American drone RQ-170 Sentinel, which is an extremely complex and expensive low-series machine.


In mid-May, photos of the Chinese Lijian drone unmanned aerial vehicle appeared on the Internet, which is supposed to become a shock machine similar to the American X-47. And here is another sensation: the creation by China of a flying vehicle that is close in flight characteristics and level of visibility to the RQ-170. This is an important achievement.

Lockheed-Martin's RQ-170 Sentinel is a low-volume and, apparently, extremely expensive unmanned aerial vehicle. For the price and complexity, it is incomparable with massive UAVs, which are used in the armed forces for tactical and operational intelligence. Although the United States Air Force is responsible for the direct operation of the RQ-170, they are used in the interests of the CIA. Total released about 20 such devices.

RQ-170 is not intended for tracking down gangs of militants. Its main task is secret intelligence operations over the territories of foreign states that have powerful air defense systems. For this purpose, the device requires reduced radar visibility. The device is equipped with both means of optical reconnaissance and radio intercept system, as well as means of detecting radioactive isotopes.

The deployment of RQ-170 in Afghanistan and South Korea is known to act against Iran and the DPRK. It was in Iran in December 2011, the US Air Force lost one unit, apparently due to a failure in the control system. The device went to the Iranians without significant damage. At the same time, his electronic filling retained at least partial performance: Iranian television showed recordings of an onboard camera from the memory of a UAV.

Aviationist author David Tsenciotti previously wrote that Iran was visited by a group of Chinese experts who studied the device. This is a completely natural development of events. The Chinese often gained access to US military equipment lost during conflicts. It is worth remembering that Chinese military experts studied the wreckage of the inconspicuous F-117 fighter during the war in Yugoslavia in 1999.

It is hardly worth counting on the easy reproduction by the Chinese industry of intelligence and telecommunications equipment and special software RQ-170. The creators of the drone intended for actions over the territory of the hostile states should initially take into account the possibility of its falling into the hands of the enemy.

At the same time, the creation of a device that is close in flight characteristics and level of visibility to the RQ-170 is an important achievement. This allows, at a minimum, to conduct experiments to improve the Chinese air defense system to combat such unobtrusive targets. In the future, the resulting technology can be used in new Chinese UAVs.

Two Chinese fifth-generation fighter aircraft, a Lijian unmanned vehicle and a new reconnaissance drone, once again demonstrate the inability of the United States to stop the large-scale overflow of Western dual and military technologies to China. The system of scientific and technical intelligence created by China, as well as the system of studying and adapting foreign technologies at the moment, allows us to successfully bypass the protective walls exposed by the Americans.