10 2013 June
9
205 OMSBR - a separate motorized rifle brigade, as a full-fledged combat unit, was created on the basis of the decision of the General Staff of the RF Armed Forces 1 in May 1995. The brigade was created on the basis of units and subunits of the 167 Motorized Rifle Brigade of the Urals Military District and the 723 Regiment of the Privolzhsky Military District. Both the 205 brigade itself and the 204 th motorized rifle regiment created exactly one year later as part of this brigade were formed on the territory of Chechnya. Separate subunits and units of the brigade, both during formation and after its completion, were continuously engaged in solving various tasks of command. This fact rather complicated the process of formation of the brigade in the composition of the troops of the North Caucasus Military District. As conceived by the military and political leadership of the country, the 205-I ombsbr was constantly stationed in the city of Grozny and the village of Shali.

Immediately after the formation of the 205 brigade for personnel, she had to start combat operations on the territory of the Chechen Republic. The brigade was actively involved in the elimination of illegal gangs. By the 1 of April, the 1996 of the 205 Brigade was formed: the 584-I separate special forces company and the 93-th separate engineer-sapper battalion. Also, by 25 in May of the same year, a separate guards motorized rifle regiment was formed as part of the brigade. It consisted of the 204, 204, 395 motorized rifle battalions, as well as the 427 th separate self-propelled artillery division. 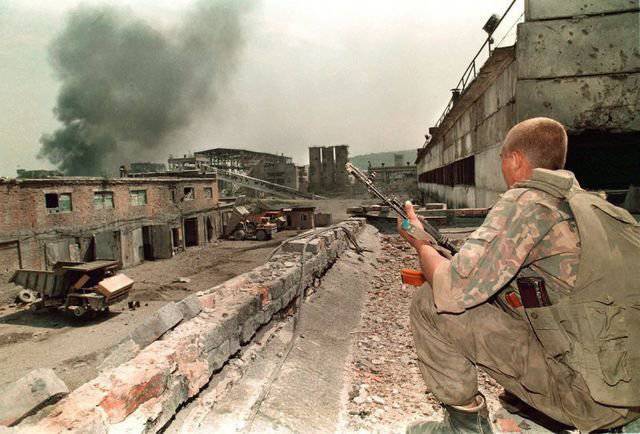 Initially, this regiment was stationed in Khankala with the task to subsequently be placed in Shali. Also by June 25, a military counterintelligence department of the Federal Security Service of the Russian Federation for the 1996 brigade was formed within the brigade as part of the brigade. In May, the brigade planned to transfer 205 to a new organizational structure from the 1996's motorized rifle regiments, one reconnaissance battalion, and a special purpose company. However, the management quickly became convinced that the organizational structure was too cumbersome to participate in local conflicts and the team was transferred to regular staff.

The personnel of the 205 brigade served on guard posts and roadblocks, protected the most important military and civilian objects, and worked closely with the MIA of Russia during the establishment of constitutional order in Chechnya. 7 January 1996, the brigade fighters took part in the operation to free the hostages and liquidate the gang of field commander Radulov in the village of Pervomaiskoye. In March of the same year, the brigade took part in the liquidation of militant gangs in Grozny.

In July, 1996, the 205 I brigade took part in an operation to eliminate militants entrenched in the area of ​​the villages of Komsomolskoye and Shalazhi. The team also took part in the August battles in Grozny. 6 August 1996, when Chechen separatists took a number of key positions in the center of the capital, then the 3 assault squad was formed in the brigade. These detachments were headed by the commander of the 3 motorized rifle battalion, lieutenant colonel A. Skantsev, and also the commander of the reconnaissance battalion, captain S. Kravtsov. On the night of 7 on 8 in August, a combat order was delivered to the brigade: the assault troops were to begin unblocking the government quarter in the center of the Chechen capital. 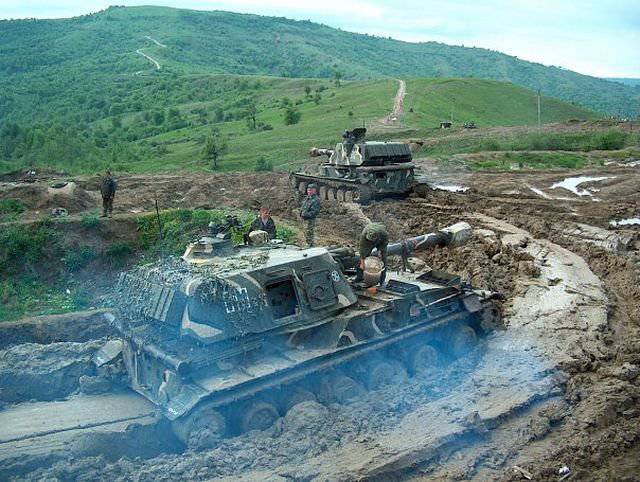 The reconnaissance battalion was the first to follow the given route. At the same time on the way the scouts came across an organized defense of the militants. As a result of the ensuing battle 2 people were killed, 1 was injured. As a result, the assault force had to retreat to the starting line. After completing the regrouping, the scouts again went to the city center, although this time they stumbled upon an ambush. Having dismounted, the scouts had to fight again. In this battle, Captain S. E. E. Kravtsov and another 6 soldier were killed by a mine.

No less dramatic events developed in another direction. The assault detachment commanded by A. Skantsev advanced to the complex of government buildings on ul. Bohdan Khmelnytsky. At that moment, when the motorized infantry approached the intersection with the street. Mayakovsky, heavy fire from small arms was opened at them weapons and rocket launchers. A fierce battle began, during which Lt. Col. A. Skantsev was killed by a sniper. As a result, lieutenant colonel A. Kabakov, officer of operational management, and lieutenant colonel N. Butko, chief of staff of the brigade, took the place of the outgoing combatants.

Having regrouped, the brigade forces were able to break into the government buildings quarter, where motorized riflemen and scouts occupied the all-round defense. At the same time, the motorized rifle battalion of the brigade lost 13 people killed and 65 wounded. In a separate tank battalion, the losses amounted to 6 people killed (3 officer and 3 contract soldier), another 5 military personnel went missing. However, for the most part, heroism turned out to be unnecessary for Russia. 23 November 1996, Boris Yeltsin signed Decree No. 1590, according to which the brigade was withdrawn beyond the administrative borders of the Chechen Republic. 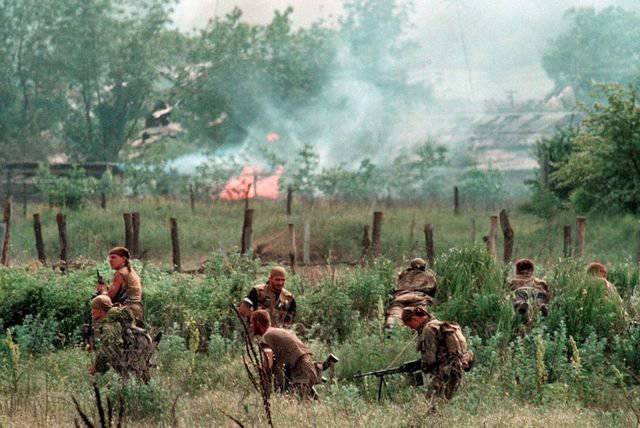 A new place of permanent dislocation of the brigade was the city of Budyonnovsk, located on the territory of the Stavropol Territory. In early December, a brigade task force led by its commander arrived in the city, as well as a separate anti-aircraft missile division. And on December 9, 1996, the railway trains with the brigade units began to approach the place of permanent deployment. 31 December 1996, the withdrawal of the brigade from the territory of Chechnya was fully completed. At the same time, the 204 regiment relocated to Dagestan in the city of Buynaksk, later it was completely disbanded, and its personnel were used to complete the units of the 136 separate motorized rifle brigade.

September 23 1998 of the year on the basis of the order of the Ministry of Defense of Russia for the number 601 205-th separate motorized rifle brigade was awarded the honorary title of the Cossack. As part of the brigade 4 battalion have honorary names: Astrakhan, Donskoy, Kuban and Terek Cossacks.
In August-September 1999, the brigade again had to take part in the hostilities. Its units participated in the liquidation of the gangs of Khattab and Basayev, who invaded the villages of Botlikh and Karamakhi in Dagestan. In October of the same year, the brigade took part in the liberation of the village of Znamenskaya from militants. In January 2000, soldiers and officers of the brigade liberated Grozny, and in March, the village of Shaami-Yurt. The fighting on the territory of Chechnya and Dagestan became a real exam for the personnel of the brigade. From the first days of the invasion of militants into the territory of Dagestan, the servicemen of the brigade were on the front line. They have carried out excellent operations in the Botlikh district of Dagestan, the liberation of the villages of Znamenskaya and Ischerskaya, an operation on the Tersky Ridge. However, the brigade led the heaviest battles in Grozny, where motorized infantry liberated Staropromyslovsky, one of the most fortified areas of the city. 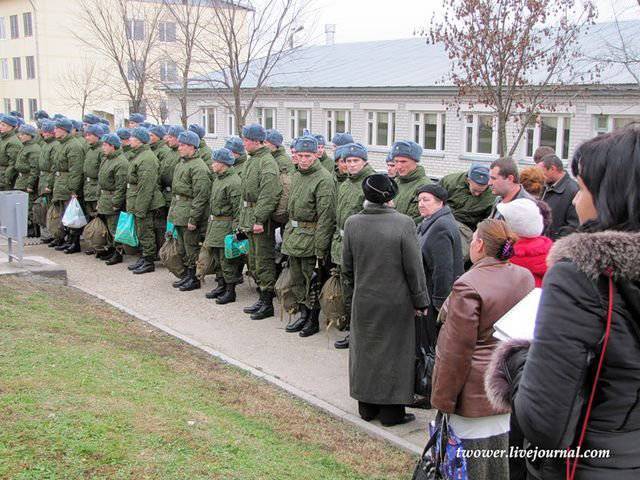 At present, the brigade is part of the 58th army, which is part of the Southern Military District, formed in 2010, which was created on the basis of the North Caucasus Military District, and the Black Sea Fleet and the Caspian Sea are also part of the district flotilla. Currently, the team is deployed in the city of Budennovsk. The military camp of the brigade, according to military bloggers, was reconstructed several years ago. Dormitories for military personnel provide for the resettlement of 7 people in a room. In addition, several three-story dormitories designed for contractors were built. Their living conditions are even better - 3 people per room and a separate bathroom. A large guarded military camp for officers and their families was also rebuilt, and its own kindergarten operates.

Ctrl Enter
Noticed oshЫbku Highlight text and press. Ctrl + Enter
We are
Three centuries of Russian marines: from cuts to new development2010 Results of the Year (Part I)
Military Reviewin Yandex News
Military Reviewin Google News
9 comments
Information
Dear reader, to leave comments on the publication, you must to register.