10 2013 June
55
Last Thursday, a conference was held at the Military Academy of Army Air Defense (Smolensk) on the development of air defense of the ground forces. Representatives of the Ministry of Defense and Industry discussed the state and prospects of domestic anti-aircraft systems, as well as examined some samples of the new technology. At a small exhibition during the conference various models of equipment and their layouts were shown. Of greatest interest is one of the shown anti-aircraft missile systems, called "Pine". The fact is that previously this air defense system was not shown at open events and the last exhibition can be considered its first show. 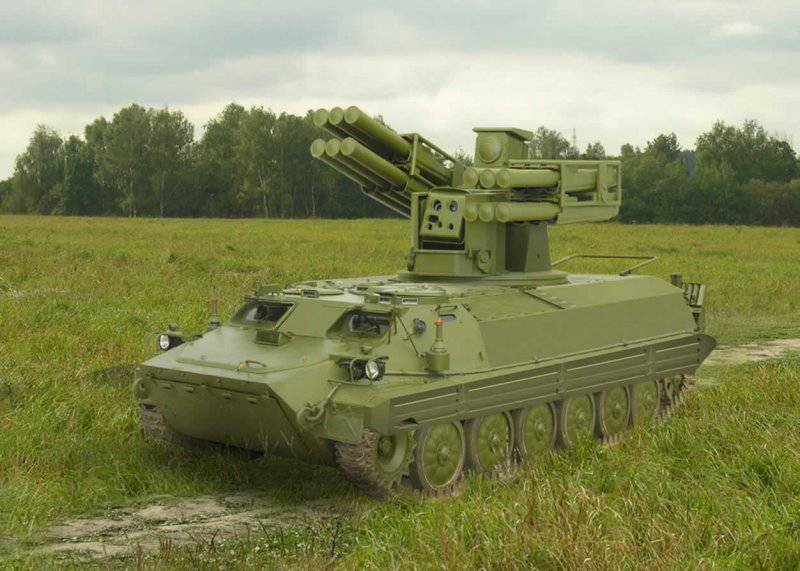 A new short-range air defense system “Pine” was created by the Design Bureau of Precision Engineering. A.E. Nudelman in cooperation with the Saratov aggregate plant. Like its predecessors, such as the Strela-10, etc., the Sosna complex is designed to provide air defense of formations on the march and in positions. When creating a new air defense system, the development organizations tried to provide it with a number of features that provide greater combat potential in comparison with the existing systems and increase the survivability of the machine on the battlefield.

As noted in the description on the official website of the Design Bureau, modern short-range anti-aircraft missile systems have several serious drawbacks. This is a high cost of combat vehicles due to the large number of modern equipment, as well as the use of active target detection systems. The last factor makes air defense systems vulnerable to enemy anti-radar weapons. To solve this problem in the nineties, Academician of the RAS A.G. Shipunov proposed to abandon the use of complex radar detection systems and instead use equipment that operates on a different principle and does not unmask itself with a radiated signal.

In addition to the presence of passive means of detection and high survivability, other requirements were also placed on the advanced air defense system. So, the Sosny missiles were supposed to hit targets at distances up to 10 kilometers, and not only planes, helicopters and cruise missiles, but also unmanned aerial vehicles were included in the list of potential targets of the anti-aircraft complex. weapon and other small objects. Two more important requirements touched the combat vehicle and launcher. It was necessary to provide automatic search, detection and tracking of targets, as well as to increase the ammunition on the launcher to 12 missiles.

In the official materials about the complex "Pine" as a basis for the combat vehicle appears light armored chassis MT-LB. However, all elements of the air defense system can be installed on any suitable chassis, wheeled or tracked. On the roof of the chassis, presented on the published images of the air defense system, a tower with an optical-electronic system and a two-block launcher is installed. To the right and left of the tower, mounting devices are fixed, on which six transport-launch containers (TPC) with rockets are mounted. With the help of the rotation of the tower, a rough guidance of the rocket in azimuth is carried out, with the help of the slope of the TLC blocks - in the elevation. The angle of horizontal guidance is 178 ° in both directions, vertical - from -20 to 82 degrees. Further control of the rocket flight is carried out by the corresponding systems of the complex.

For the new anti-aircraft complex developed two-stage guided missile "Sosna-R" with a combined control system. Immediately after the missile leaves the container, it is controlled by a radio command system that leads ammunition to the line of sight. After that, the starting engine is separated and the noise-protected laser guidance system is activated. The rocket is proposed to equip the original two-compartment warhead with a proximity fuse having a pie chart. The latter compensates for errors in hover. The rocket is created as a product that does not require additional checks or tests during the entire service life.

A gyro-stabilized platform with a set of necessary equipment is placed on the turret of the ZRK combat vehicle. It contains tele- and thermal imaging optical systems, a laser rangefinder with the ability to deflect a beam, a rocket control equipment along a laser beam, an infrared rocket finder, and climate control sensors. All other elements of the electronics of the anti-aircraft complex are located inside the armored hull. This is a digital computer, remote control, automatic capture and tracking, rocket control system, etc.

In accordance with the technical task, the new Pine air defense missile system should have an automatic search mode and attack targets. As stated, the complex can operate in two modes. In the automatic, all processes occur without the participation of the operator, which can significantly reduce the reaction time. In semi-automatic mode, the operator controls the operation of the systems, but most of the processes are carried out automatically. Semi-automatic mode is recommended for combat work in a difficult jamming environment.

The missiles and the anti-aircraft complex itself are protected from interference by several methods that are implemented at the design level. Thus, the location of the laser receiver in the back of the rocket does not allow distorting or muffling the control signal. Interference immunity of the ground part of the complex is provided by a narrow field of view of the television and thermal imaging channels (no more than 6,7x9 degrees), as well as the use of special computational algorithms that allow identifying the target by its characteristic features.

The Sosna anti-aircraft missile system is supposed to be manufactured as a ready-made combat compartment, which can be installed on any suitable chassis. At the same time, unlike the previous complexes of the same purpose, the Sosny operator is located inside the armored hull and does not rotate with the turret. At the request of the customer, the anti-aircraft tower can be equipped with an additional small-sized radar station for detecting targets.

In the base case, without a radar, the Pine air defense missile system is said to have high survivability on the battlefield. During the search for a target, the complex emits nothing, which makes its detection more difficult. During the first two seconds after the launch of the rocket, the antenna of the rocket control system is in operation, after which it is turned off and control is carried out only by the laser beam. If necessary, the base machine of the complex can be equipped with additional means of reducing the visual or thermal visibility.

In general, the Pine air defense missile system has rather high prospects, but its future is not yet completely clear. According to the Chief of the Air Defense Forces of the Ground Forces, Major General A. Leonov, the Sosna complex has not yet passed state tests and has yet to discuss its capabilities and prospects. After that, the issue of adopting the complex for service will be considered. While the refinement and improvement of systems continues.