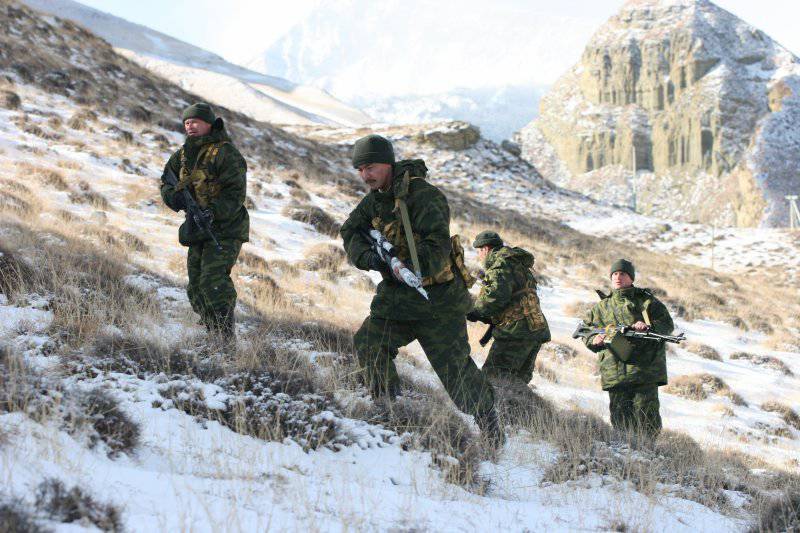 The formation of two mountain separate motorized rifle brigades was almost completed on the territory of the North Caucasus. They began as early as 2005, when in Karachay-Cherkessia, not far from Cherkessk, as well as in Dagestan, 250-km from Makhachkala began the construction of military camps, delivered all the necessary types of weapons and equipment. Almost all the necessary material resources were transferred in a few months. And at the end of 2007, both brigades began combat training.

These units can be considered new, because, firstly, they were created specifically by order of the President of Russia, and secondly, nothing like this has existed until now in the Russian army - the 33 and 34 brigades are called upon to perform tasks in mountainous conditions. The head of state then noted that these units are called upon to become centers for the overall work of the Ministry of Defense, the Federal Security Service and the Border Troops.

33-I mountain separate motorized rifle brigade is deployed in one of the districts of Dagestan, Botlikh. And it is not accidental, because on the one hand the military camp is surrounded by mountain paths leading directly to Chechnya, and on the other side is the Donkey's Ear, where in the summer of 1999, the most brutal and bloody battles between paratroopers of the 7 Airborne Guards Division were marked and militants led by Sh. Basayev.

The construction of the military camp of the 33 Brigade is still ongoing, the park for the automotive and armored vehicles, the commissioning of the hospital and a large sports stadium are in the process of completion. All buildings are equipped with the latest technology. As for the situation of living and practicing combat training, all the necessary conditions have been created for this in the town. For family soldiers, apartments are fully furnished and equipped with everything necessary, from kitchenware to household appliances. For military servicemen under contract, hostels are provided. Each room has several people. In addition, dining rooms, centers of culture and leisure, and consumer services combines are also provided. There is also a kindergarten and school. The total number of buildings that are located on the territory of the military camp has reached three hundred. Over all this, the state allocated over 12 billion rubles.

If we talk about combat training, then there are no problems with that either. The most modern educational and material base is provided in the military camp. A training ground was built on the territory of Chechnya, at which the combat training of the unit is being conducted. In addition, there are educational buildings, equipped with the latest standards, landing assault strip, as well as many other objects of educational and material base. In the process of preparing units, there is a priority: while one of them is engaged at the test site, the rest are engaged in the study of theory and military science in the academic building. It presents several computer simulators for mechanical drivers MTLB-V, a simulator that is used for training in firing from the Igla air defense missile system, a small artillery "training ground" where artillerymen conduct classes. The corps also provides classes for training most types of military specialties, gyms for playing sports, hand-to-hand combat.

As for recruitment, it was conducted throughout the entire 2007 year. Subdivisions were formed in the Moscow, Volga-Urals, Siberian and North Caucasus districts. Already at the very beginning of the year, the selection was held, and people were appointed to the posts of ensigns and officers of the brigade. In March, charges were held with the division management officers, and by April a task force of officers had arrived in Botlikh, which was called upon to organize work on the reception of military facilities and the preparation of the basis for the reception of units. The first of them arrived at their final destination at the beginning of May - they were soldiers from the curfew platoon, the brigade command and the medical company.

In August, a tactical exercise, unique in its essence, was conducted in one of the brigade divisions. The division of mountain riflemen with regular weapons took several peaks in the area of ​​Elbrus. Their height reached more than 5,6 thousands of meters above sea level. As part of the 4,5 high-rise exercise, thousands of meters were fired from standard weapons, as well as heavy machine guns, millimeter 82 mortars and anti-tank weapons. In addition, as part of the exercise, a test of knowledge of mountain training techniques was carried out. Mining, mountaineering clothing and equipment, new models of radar equipment, means of protecting military personnel from low temperatures and fire damage, as well as special food for mountain units were subjected to tests.

Preparation for the ascent was carried out according to an individual program. The instructors of the Russian Mountaineering Federation provided tremendous support. For a month, unit soldiers conducted training on the territory of the Daryal mountain range, learned how to live in the mountains. The trainings were also held on the Karmadonsky Pass.

In the course of the exercises, all tasks were accomplished, but it was not without problems. And there is nothing surprising or strange about this, because these were the first teachings of this kind. The fighters had to constantly use optics, because it was almost impossible to determine the distance to the target by eye. It was necessary to take into account the trajectory of the bullet, which at a high-altitude of about 3-4 thousands of meters is much steeper.

Of course, all this is very detailed in the methodological manuals compiled by the Main Directorate of Combat Training of the Armed Forces. During the development of the documents, experience gained in Chechnya and Afghanistan was used to draw upon the work of foreign colleagues. However, this is all theory, but in practice everything looks completely different.

Before arriving at the permanent location, each unit of the brigade received special training at the Daryal training ground. Of course, this cannot be compared with the experience gained by the fighters during the conquest of mountain peaks, but all this awaits military personnel of mountain divisions in the near future, because such ascents are planning to make mandatory.

As for the 34 mountain brigade, over the entire period of its existence, its fighters, fortunately, did not yet have to take part in real hostilities, although during the war in South Ossetia, the mountain special forces units were fully prepared to repel enemy attacks, while on Marukh and Klukhorsky passes. Currently, the main task assigned to the brigade is to ensure security during the Summer Olympic Games, which will be held in 2014 in Sochi.

The living and training conditions on the territory of the military camp of this brigade are no worse than those that the 33 brigade can boast of. The barrack looks more like a dormitory, each room is designed for an 4 person, a washbasin, a shower and a bathroom are provided for two rooms. In the rooms for each soldier provides a wardrobe for personal belongings, there are chairs and a desk. Each company has its own sports room, where, in addition to simulators, weights and dumbbells, there are mirrors on the walls, and punching bags. In addition, on the territory of the town there is also a large sports hall, which houses the only indoor climbing wall in the country. On it, the fighters practice their mountaineering skills. The street provides an obstacle course, horizontal bars and parallel bars, as well as a special strip, which is intended for the division of mountain reconnaissance.

Brigadier shooting range is also amazing: it is equipped with caponiers, trenches, targets, as well as a large number of other structures.

Currently, 33-brigade represented by the following units: 838-m and 839-m motorized rifle individual mountain battalions, 490-m howitzer separate self-propelled artillery battalion, 1198-recce separate mountain battalion, antiaircraft rocket artillery battery and battalion communications, an engineering sapper company and an electronic warfare company, a material supply company and a repair company, a medical company, a commandant platoon and a RKHB platoon, a VUNRO and VUNA, a military orchestra and a department of management, the editorial board and the printing press of newspapers s and polygon.

A few words should be said about the combat training program. According to the approved standards, 114 watches for motorized rifle battalions and 128 watches for mountaineering are allocated for this kind of training. Each fighter of the mountain brigade must undergo a course of basic mountain training, which includes the study of safety in the mountains, the nature of the mountains, skiing, handling equipment. The teams are equipped with special slopes and mounds for the training of movement skills on the slopes in the summer, on the snow slopes - in the winter. A section of the river was also equipped where fighters learn to overcome mountain rivers in the summer and work out movements in “cats” in winter,

If we talk about uniforms, it should be noted that one set of it costs about 140 thousand rubles. But such kits are intended only for rock climbers. For all the other fighters of the brigades, sets were purchased cheaper - on the order of 49-80 thousand rubles, depending on what terrain and tasks of which importance it is intended. Certain elements of uniforms and equipment were purchased abroad.

It must be said that there are no random people in any mountain brigade. All fighters have excellent training. And we can say with confidence that such guys, as in the mountain special forces, will never let you down.