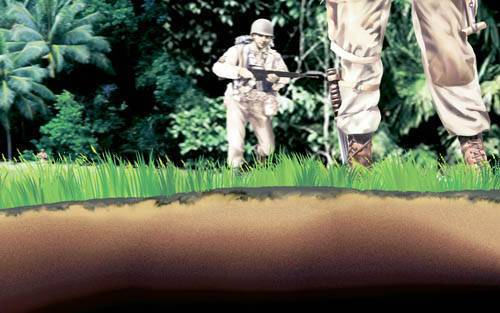 Black Widow - “Black Widow”, this name was given to this Soviet mine, known in the world not less than the famous Kalashnikov assault rifle, and just as widespread.


For the first time, this mine was talked about during the Vietnam War of 1964 – 1975. Along with the fighting in the jungle, “black widows” also sprang up: Vietnam, Cambodia, Laos and Thailand. In 1967, the “widows” reached the Middle East, where Egyptian and Syrian troops actively used them. They were installed in thousands during the Soviet-Afghan war from 1979 to 1989. This mine could be found in any country affected by armed conflict in the second half of the last century. It was this mine that deprived Shamil Basayev of his feet when, with the militants in January 2000, he broke from Grozny. It is quite possible that it was the journalist Dmitry Kholodov who took it in his office when an explosion struck.

Like the Kalashnikov assault rifle, the PMN mine was born in the USSR in 1949, and, like an automaton, it was produced and produced under licenses and without them in many countries. In China, under the designation Type 58, in Hungary - Gyata 64, in Argentina - FMK-1, in Bulgaria - PMN, as well as in Iraq, Iran, Pakistan, India, Cuba, etc. Accurate data why the mine was dubbed the "black widow", no. Maybe because of the black color of the rubber cover or because the person stepping on it has little chance of remaining alive. But most likely - because of the irrational fear of mines, which covers even the fired and experienced soldiers, paralyzes their will, deprives courage and the ability to go forward. 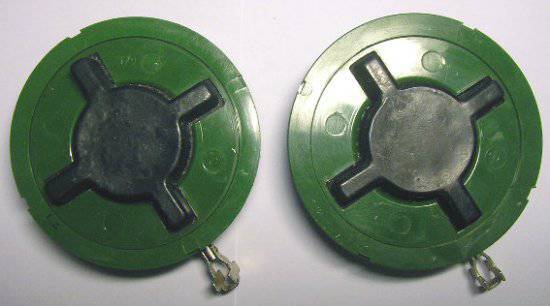 In reality, far fewer people died from mines in all wars and were crippled than from bullets, shells and bombs. Oddly enough, but the main striking factor of an anti-personnel mine is not the force of an explosion or fragments. Mina cripples not so much the body as the soul of a soldier. Mine fear (another name - mine horror) - this is what stops the advancing infantry, this is what makes the fighters afraid to take at least a step. Moreover, the more experienced the soldier, the more he fights, the stronger the mine terror.

But the probability of stepping on a PMN minefield on a standard Soviet minefield is only 0,07, that is, out of a hundred soldiers caught in such a field, only seven will be blown up. And meanwhile, knowing that the minefield is ahead, the soldiers would refuse to go on the attack or, realizing that they were on the minefield, they would lie down and would prefer to become fixed targets for enemy machine guns rather than rush forward or retreat.

The soldier in battle is afraid, of course, of bullets and shells. But he understands that on the other side the same soldier also cannons are beating at him and machine guns are firing - there is a confrontation. Those who are more skilled, experienced, courageous and quick are also more likely to win and stay alive. Mine is not like that. And the consciousness of the fact that you yourself bring your killer into action deprives a person of courage and paralyzes his will.

Consider PMN closer. This is a Soviet anti-personnel high-explosive mine pressure action. Anti-personnel - that is, designed specifically for the destruction or injury of a person. High-explosive - striking force of the explosion. Pressing action means it will explode only when pressure is applied to it with a force of at least 8 – 25 kg. To trigger is enough to come.

Inside the mine there is a charge of trotyl weighing 200 g. When the mine explodes, the ensuing leg usually comes off to the knee. What happens to the second leg depends on whether the person is walking or running. In the first case, he is likely to lose his second leg; in the second - the leg can survive. In addition, a powerful shock wave deprives a person of consciousness, drives remnants of shoes, clothes, fragments of his own bones into his body, and burning explosive gases cause severe burns. If a person who has undermined a mine is not provided with timely first aid, death from a painful shock or large blood loss can occur.

Along with all its advantages, PMN also had a very significant drawback: the time of bringing a mine into a combat position depended on temperature. If at a temperature of + 40ОС mine is transferred to the combat position in 2 – 3 minutes, then at –40ОС it takes two and a half days - the cold sharply increases the resistance of the metal of the safety plate to cutting (see inset).

Therefore, by the second half of the sixties, the PMN-2 mine was accepted into service with the Soviet army. It differed from the PMN in that instead of the metal element being cut, a rubber bellows was installed in it, in other words, a short rubber corrugated tube that was in a safety position in a compressed state. Such devices in the language of miners are called “long-cocking mechanisms”. Pulling the safety brace, the miner released the bellows, which began to fill with air through the calibrated holes and straighten out. At the same time, at the end of its straightening, the bellows released a spring-loaded slider with a detonator, which became opposite to the drummer.

Mina PMN-2, besides the fact that the time of her bringing into combat was incomparably less dependent on temperature (under all conditions from 2 to 10 minutes), had another valuable feature - she was always ready to work. The only operation performed by the miner was that he turned and pulled out the safety clip. But PMN had previously to be prepared for work: unscrew the cork, insert a detonator into the mine, wrap the cork, unscrew the cork on the opposite side of the mine and check the operability of the metal element.

The charge of the mine was reduced by half, because it was recognized that 200 g of TNT was a bit too much - the person had enough and half the charge. True, TNT was replaced by more powerful explosives TG-40 (a mixture of TNT and RDX). The trigger force was raised from 8 – 25 kg to 15 – 25 kg in order to increase the mine’s resistance to explosive demining. However, PMN-2 was much more difficult to manufacture, and therefore much more expensive. She did not enjoy popularity. While PMN is widely known throughout the world, PMN-2 was used sparingly, mainly in the CIS, in Afghanistan and some other countries. Yes, and it was made exclusively in the Soviet Union.

By the end of the seventies, it ceased to satisfy the military and PMN-2. The maneuverable nature of modern wars, their short duration led to the fact that often their own minefields became a hindrance to the troops. In addition, after the end of hostilities, minefields had to be cleared, which took a lot of resources and time.

It was required that after a certain time, anti-personnel mines would either become safe or self-destruct. Therefore, the PMN-3 mine was developed, which externally did not differ from the PMN-2, but had an electronic fuse that ensured reliable operation of the mine under the soldier’s foot, excluding the explosion of the mine from the impact of a shock wave upon detonation of demining charges (due to the difference in pressure on the mine shock wave and legs) and automatically blew mine after a predetermined period. It was possible to pre-set the counter for a period of time from 0,5 to 8 days, after which the mine exploded without causing harm to anyone. Knowing the time of the combat work of the minefield, the commanders were confident that by the right time this minefield would not exist.

But the eighties came, funding for the army began to decline, and a much cheaper mine was needed. It was decided to abandon the release of expensive PMN-3 in favor of a cheap last version of the Soviet anti-personnel anti-personnel high-explosive mine - PMN-4. This mine is smaller both in diameter, (9,5cm) and in height (4,2cm), and in the mass of the bursting charge (total 50 g TG-40). The long-cocking mechanism was hydraulic. After removing the safety guard, the rubber gel began to be squeezed out through the calibrated holes, which took from 1 to 40 minutes depending on the ambient temperature. After this, the mine became in a martial position. The mechanism of self-destruction was abandoned for economic reasons. The era of very different mines has come.

Ctrl Enter
Noticed oshЫbku Highlight text and press. Ctrl + Enter
We are
The first Soviet anti-tank mine T-4Torpedo WASS Black Shark (Italy)
62 comments
Information
Dear reader, to leave comments on the publication, you must to register.