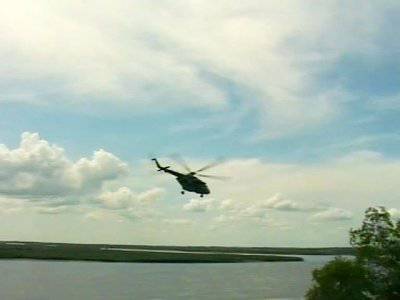 In the Khabarovsk Territory, up to 140, a group of forces and equipment was increased to conduct a search for the missing Mi-8 helicopter, six aircraft and nine pieces of equipment were involved.


To enhance the search group from the city of Komsomolsk-on-Amur, eight rescuers of the Khabarovsk branch of the Far Eastern Search and Rescue Team of the Emergency Ministry emerged. At their disposal - two cars and two boats. Planned departure to the intended area of ​​the accident An-74 Russian Emergencies Ministry.

At present, about 4 thousand square kilometers of terrain have been surveyed, the Interfax news agency reported. Searches have not yet given positive results. A hotline telephone has been opened at the Head Office of the Ministry of Emergency Situations of Russia for the region: 8 (4212) 41-62-60. On it you can find information about the progress of the search.

As reported, the Mi-8 helicopter did not get in touch on Thursday at 21: 50 (14: 50 in Moscow). He made a commercial flight and followed from the village of Tugur to the village of Briakan. On board were four crew members and a passenger, as well as about three tons of cargo - food and fish.

To search for the missing helicopter, a group of more than 100 people was formed. On the morning of Friday, June 7, a Be-200 plane with rescuers flew from Khabarovsk to the search area with a rescue team from Khabarovsk to Komsomolsk-on-Amur a Mi-8 helicopter EMERCOM of Russia was sent, which, taking aboard a group of rescuers, would also fly to the incident area. Two helicopters Mi-8 of commercial airlines are in readiness for departure.

Ctrl Enter
Noticed oshЫbku Highlight text and press. Ctrl + Enter
We are
Weekly summary (9-15 of January) on the military and social situation in the DPR from the military officer "Mag"Centenary Rescue Ship "Commune"
Military Reviewin Yandex News
Military Reviewin Google News
10 comments
Information
Dear reader, to leave comments on the publication, you must sign in.