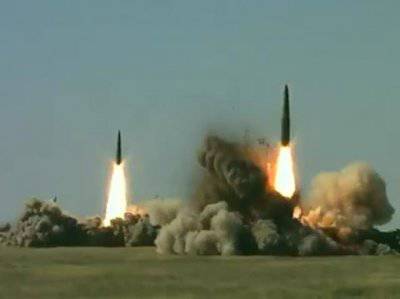 
The possibility of deploying Russian operational-tactical missile systems (OTRK) "Iskander-M" in Armenia should not worry Azerbaijan much. About this with a hefty share of mockery stated IA REGNUM expert on the problems of the Caucasus, Viktor Yakubyan. After all, the target for Iskander in this case is not Azerbaijani territory, but elements of the US global missile defense system in Turkey - an early warning radar and Patriot missile systems, he explained. However, he immediately added: “On the other hand, the presence of such missile systems in Armenia is an additional deterrent factor for Azerbaijan. He nullifies the aspirations to solve the problem (Nagorno-Karabakh. - Approx. KM.RU) by force if negotiations reach a dead end. That is why Baku is worried. ”

And in Baku they really got agitated, the Armenian media would smack. Here is what the resource Voskanapat.info writes, for example: “As expected, news about the arrival in Armenia of the Russian operational-tactical missile systems (PTRK) Iskander-M and multiple launch rocket systems (MLRS) Tornado-G caused the effect of a bombshell on the oil-bearing shores of the Caspian Sea. Still, all the multimillion purchases of armaments voiced by the Transcaucasian Turks, the constant boasting about the military budget brought to 4 billion dollars and the threats from two Armenian states replicated from Baku turned into an empty sound in the blink of an eye. This doubly hurtful fact for the Turks was recorded at a time when the Azerbaijani electorate seemed to have begun to seriously believe in its hypothetical power that had never defeated the army and its ability to “restore the desecrated territorial integrity.”

Sweet euphoria in the camp of former nomads, as if by a wave of a magic wand, was replaced by a gloomy despondency. A couple of days ago, when the information portal Voskanapat.info first reported this news, one of the Azerbaijani tabloids wrote: “Armenians frighten Azerbaijan with the presence of Tornado-G and Iskander-M.” It seems that the representative of the Armenian agitprop was instructed to scare Azerbaijan. ”

Today, all Azerbaijani news agencies are doomed to replicate the news of Armenia’s receiving a formidable and highly effective modern tactical weapons already as a fait accompli. A series of tearful articles about “treachery and treachery of Russia”, “unfortunate misunderstood Azerbaijan” and its further difficult fate is expected to be published soon, ”Voskanapat.info mocks.

This resource is indeed the first to be notified of the arrival in Armenia of several installations of high-precision Iskander-M complexes. Then this information was spread throughout the world by the Armenian service of Radio Liberty, citing sources in the Ministry of Defense of Armenia. And the country's military department then secretly confirmed the authenticity of the arrival of the Iskander complexes to a number of publications.

However, this was discussed earlier: in the middle of May of this year, military sources told REGNUM about the possibility of deploying Iskander-M OTRK and Tornado-G multiple-launch rocket systems in Armenia, and even indicated the location of their deployment - 102 military base of Russia, which is located in Gyumri.

It is worth noting, by the way, that Moscow sent there a non-export version of the complexes (Iskander-E), the range of which does not exceed 300 kilometers, but the Iskander-M, which is native for the Russian army and capable of hitting targets with a deviation of 1- 2 meters at a distance of 500 kilometers. “Fiery greetings of Baku,” Voskanapat.info says in connection with this.

And yet, of course, Moscow sent to Armenia such a formidable weapon for any enemy, not so much to deter Azerbaijan, but to counter the threat posed by the components of the US missile defense system in Turkey. And also, undoubtedly, for the general strengthening of its military-strategic presence in the macro-region of the Greater Middle East, as it is now called. And here the aforementioned Viktor Yakubyan is absolutely right: “Such a move on the part of Russia would be very logical. We remember the intention of Moscow to deploy the Iskander complexes in Kaliningrad in the event of the appearance of Patriot missiles in Poland. The Americans refrained from this step, and Russia did not begin to take Polish territory as a near sight. But in Turkey, elements of the US missile defense system were still deployed, which was the reason for Russia's countermeasures. It’s hard to imagine a better platform for Iskander than Armenia, a member of the CSTO, all the more so since the Russian military base is deployed on a long-term basis. ”

Another expert, Hayasa military analyst Leonid Nersisyan, adheres to a similar view, who in an interview with REGNUM news agency noted that the deployment of Iskander-M complexes in Armenia will bring the strategic potential of the Russian military base in Gyumri to a new regional level. “Russia will thereby noticeably raise its weight in the region and will be able to effectively resist the possible threats associated with the spread of destabilization. This may be especially relevant in the event of the start of a military operation by Israel and the United States against Iran, since the balance in the region in such a case can collapse like a house of cards, ”Nersisyan believes.

According to the expert, there is a clear need for strengthening the air forces and high-precision missile weapons in Armenia: “Aviation The Russian Federation in Armenia is represented by only one squadron of rather outdated fighters, which also practically do not have the ability to strike at ground targets and break through a powerful air defense system. On the other hand, we see the actively strengthening Turkish Air Force. With a very high probability, in the coming years they will begin to receive fifth-generation American fighter F-35s, which the MiG-29s are clearly not suitable for fighting. And at the moment, 18 MiG-29 fighters, even despite the excellent flight personnel, can compete, and even then with difficulty, only with the Air Force of Azerbaijan and Georgia. Naturally, there can be no question of any rivalry with more than 200 Turkish F-16s. From all of the above, we can conclude: the Russian Federation needs both qualitatively and quantitatively to strengthen the aviation group. The most high-quality and powerful option at the moment seems to be the deployment of 4+ or 4 ++ generation fighters, such as Su-27SM3, Su-30SM or Su-35S. ”

And such a development of events is by no means an empty dream of one expert. As Secretary of the National Security Council of Armenia Arthur Baghdasaryan said yesterday on the Armenian Yerkir Media TV channel, new Russian military bases will open in Armenia (besides the already existing 102), including the CSTO Joint Aviation Base. Armenian media, by the way, do not exclude that it will be deployed in Karabakh. In addition, the Transcaucasian association of the CSTO forces and the base of the CSTO operational response forces will be deployed in Armenia. Armenia strengthens relations with Russia and the CSTO, the Secretary of the National Security Council said.

So, the decision of Moscow to modernize the military base in Gyumri with Iskander-M systems has, apparently, become an important starting point for a whole set of measures to strengthen our country's military-strategic presence in the entire Transcaucasian and, more broadly, the Greater Middle Eastern region, which literally before our eyes, international “democratizers” are trying to reshape. Moreover, it is worth noting its timeliness, but also, so to speak, a very high efficiency. Russia would always respond to military-geopolitical challenges thrown to her by fate!

Ctrl Enter
Noticed oshЫbku Highlight text and press. Ctrl + Enter
We are
There will be no “West vs Russia” situation in the Karabakh conflict: interview of expert Sergey MinasyanErrors of Armenia and the success of Azerbaijan ("Journal of Turkish Weekly" Turkey)
Military Reviewin Yandex News
Military Reviewin Google News
225 comments
Information
Dear reader, to leave comments on the publication, you must to register.