CSTO: everything is beautiful in words

8 2013 June
6
It seems that the newly appeared military alliance did not leave the stage of declarative statements and assurances of friendship and allied relations.


27 May 2013, a meeting of the Council of Ministers of Defense of the Collective Security Treaty Organization (CSTO CMS) was held in Bishkek. Russian Defense Minister General of the Army Sergei Shoigu took part in its work.

In addition to the ministers of defense, on the same day, the heads of departments of the Council of Ministers of Foreign Affairs (COM) and the Committee of Secretaries of Security Councils (CSSC) of the CSTO verified their positions in the Kyrgyz capital, and a joint meeting of the CMFA - SMO - CSSC was held. The main issue of the event was the “Afghan problem-2014”.

What will bring the "Afghan"

As is known, in the 2014 year, the United States withdraws its troops from Afghanistan. Other coalition countries will also leave. This can lead to destabilization of the situation both within the country and at its borders. Some experts predict that Afghan President Hamid Karzai will share the fate of Najibuly. 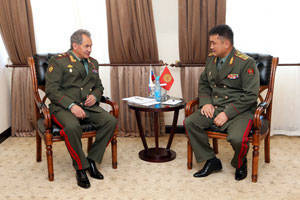 In Central Asia, everyone knows what an "Afghan" is - a very strong and dry, baking local wind with dust that brings a lot of trouble. There is a danger that the hordes of the Taliban and the terrorists, like the "Afghan", will move across the border to the northeast in search of a better life and earnings.

It is no secret that in the same Syria of the five or six thousand militants fighting there, only about one and a half thousand have a real relationship with this country. The rest of the “wild geese” arrived in Syrian territory from Afghanistan, Pakistan, Turkey, Tunisia, Qatar and several European countries. They do not care where to kill, just to pay. And there are more and more such “soldiers of fortune”, fighters “for the purity of faith”, including in the Islamic Republic of Afghanistan itself.

Alas, no one has yet specifically said what their strengths, weapons, numbers, tactics and intentions are. The report on this topic of the CSTO Secretary General Nikolai Bordyuzha at the plenary meeting of the COM, the SMO and the CSSC was closed. He did not want to answer the journalists' questions on the results of the summit. Although this problem, if it is real, concerns the population of the countries bordering Afghanistan and Russia, which should know what to prepare for. Indeed, not so long ago, the same Bordyuzha said in an interview: “In the event of a negative development of the Afghan scenario, Tajikistan and Kyrgyzstan will be in the first place under attack.” And that means Russia, which has a visa-free regime with these republics.

Russian Defense Minister Sergei Shoigu did not say anything about this either. But if there is a problem, it should be discussed publicly. The opinion of society here is very useful. Without his participation and assistance it is unlikely to be able to prevent events similar to those that occurred in June 2010 of the year in southern Kyrgyzstan. Then, as a result of inter-ethnic clashes, hundreds of people died and suffered, and thousands became refugees and internally displaced persons. The CSTO was unable to somehow prevent or localize the bloody squabbles, which partly indicates its viability. As Russian Foreign Minister Sergei Lavrov recalled, the riots in southern Kyrgyzstan revealed the need to improve the crisis response mechanism of the Collective Security Treaty Organization.

Hopefully, what happened is an exception to the rule. After those events, a mechanism was developed to respond to crisis situations that pose a threat to the security and sovereignty of the organization’s countries. In particular, the modalities of launching the mechanism for developing and implementing measures to assist the CSTO member states in such cases are defined. But, it is asked, what prevented to make it earlier? After all, the Batken events of 1999 of the year were still in memory, when dozens of militants penetrated the territory of Kyrgyzstan from Afghanistan and terrorized the population for several days. Not immediately able to cope with them and the army of the Kyrgyz Republic.

All this requires a decisive intensification of the actions of the CSTO, which otherwise could turn into a stagnant bureaucratic structure, producing a heap of papers and decrees.

The signing in Bishkek of a new document - “Provisions on the procedure for responding to crisis situations” became of fundamental importance. Along with the agreements defining the status and use of the Collective Rapid Reaction Force (CRRF) in the conditions of conducting various operations, it significantly strengthened the organization’s peacekeeping potential. This is about the realization of the right to collective defense in the event of a threat or commission of an armed attack (aggression) against one or several members of the CSTO, and countering other challenges and threats to collective security.

In addition, at the meeting of the CSTO SMO, there was an exchange of views on the measures taken by the military departments to implement the organization’s intergovernmental acts, decisions of the Collective Security Council in the regulatory legal framework.

Members of the Council of Ministers of Defense adopted the “List of weapons and military equipment of the forces and means of the organization’s collective security system.” It contains requirements for parameters and numerical characteristics of weapons and military equipment that will ensure the interoperability of military contingents during joint operations, optimize the logistics system by defining a single range of ammunition and fuel and lubricants. Significant event, do not say anything. But again the question arises. A collective security agreement has actually existed since 20 April 1994. Since then, almost 20 years have passed. The question is, why is such an important document, without which it is simply impossible to effectively conduct joint hostilities, has not yet been adopted?

It is quite justified that this time at the meeting the “Collection of Forms of Basic Documents on the Organization of Joint Operational and Combat Training” was approved. This will provide serious assistance to the commanders (commanders) and the headquarters of the armed forces of the CSTO and the joint headquarters in the preparation and conduct of joint exercises and trainings.

The Consultation Plan of the representatives of the member states of the organization on foreign policy, security and defense issues for the second half of 2013 - the first half of 2014 was also discussed. A package of documents on the preparation and conduct of peacekeeping operations was considered by the Collective Peacekeeping Forces of the CSTO.

The issues of training, supplies of weapons and military equipment at preferential (domestic) prices, and the fight against trans-border organized crime were constructively discussed.

During the event, Russian Defense Minister Sergei Shoigu held a number of bilateral meetings with his counterparts from the CSTO member states, during which he discussed the problems of military and military-technical cooperation. In particular, he met with the head of the defense department of Kyrgyzstan Taalaibek Omuraliev. In an atmosphere of trust and mutual understanding, they discussed the state and prospects of cooperation between the two countries in the military field.

Sergei Shoigu also visited the Russian airbase in the city of Kant. Recall that in Kyrgyzstan, in addition to the air base, Russia has other military facilities. These are the 954 th anti-submarine armament test base (Karakol, Issyk-Kul oblast), the 338 th communications center (Kara-Balta, Chui oblast) and radio-seismic laboratory No. 17 (Mailuu-Suu, Jalal-Abad oblast). A year ago, the Kyrgyz authorities had intentions to increase rents for their use from 2014 onwards. According to some local officials, this was due to inflation. The new lease agreement, considered in Bishkek, should provide for cash payment, and not the supply of Russian weapons or compensation through training of the Kyrgyz military. How and what agreed this time is unknown. But, I think, in the light of the upcoming Afghan events in Kyrgyzstan, this will have to be forgotten in order to have a reliable guarantee of protecting its territorial integrity and sovereignty from the CSTO allies, primarily Russia.

According to CSTO Secretary General Nikolai Bordyuzha, ten documents were signed on the results of work in Bishkek. Were considered specific steps to minimize the threats faced by states, especially on the problems of terrorism and extremism, drug trafficking. “It is gratifying that representatives of the border services of the states responsible for ensuring information security and countering cyber attacks took part in our work,” he said. “A lot of proposals have been made that will be worked out.”

It should be noted that the CSTO SMO is still an advisory body. Therefore, it was important what the presidents of the countries belonging to this organization will say the next day. The heads of the CSTO member states of the Central Asian region at the informal summit in Bishkek on 28 in May decided to assist the Afghan authorities after the withdrawal of the International Security Assistance Force from the territory of that country in 2014. During the meeting, they focused on improving the collective security system and implementing measures to counter the challenges and threats emanating from Afghan territory. It was decided to assist the authorities of Afghanistan, including the strengthening of the military component. That is, to assist Kabul in ensuring stability in the state. However, specific events were not disclosed.

At the same time, the protection of the borders of the CSTO member states, their arrangement, the provision of the Collective Rapid Reaction Forces with modern samples of compatible weapons and equipment will be strengthened. A new impetus was received by the work on the interaction of law enforcement agencies and relevant services in the fight against extremist manifestations.

Will it bring a result, time will tell.

Ctrl Enter
Noticed oshЫbku Highlight text and press. Ctrl + Enter
We are
A great interview with Sergey Lavrov: about Ukraine, Obama and IranAfghanistan and Pakistan are US allies
Military Reviewin Yandex News
Military Reviewin Google News
6 comments
Information
Dear reader, to leave comments on the publication, you must sign in.