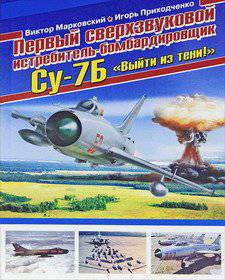 History The aircraft is intelligibly explained, normally structured. The authors of the book (Prikhodchenko, as I understand it, was responsible for the illustrative series) argued in opposition to the popular belief that the Su-7 was made a bomb atomic bomb initially - at the time of the Su-7B works, the corresponding bomb class was not even in the project.


However, the main advantage of the newest books on the history of technology is that they reproduce without embellishment the real picture of the state of the military industry and the armed forces of the Soviet Union. Here I can relate the book of Markov to one of the best examples since he managed to draw a three-dimensional and vivid picture of the fate of a particular machine, both in factory workshops and on drawing boards, and in parts of the USSR Air Force. Actually it was in this format that it was necessary to submit information to 1980's, for clearing the brain and a more realistic picture of the world.

At the very beginning of operation, the Su-7 as a fighter ie. without a letter was very raw. Due to the meager resource of the first engines (25-50 hours), the Su-7 of the early series of the release was rolled out onto the strip and then started the engine. In the parking lot, too, drove the tractor. The resource of the AL-7F-1 engines even for the most advanced modification of the first decade of operation did not exceed 250 hours at the price of the 1969 product of 150 thou. the aircraft engine hour was worth 600 rubles. Only by the middle of the 80-s did the engines reach the 2200 hours of the resource.

The book abundantly reveals the background of the well-known saying “Sukhoi aircraft, and the technician is wet”. The author writes about the beginning of the Su-7 career: “In addition to the engine resource, the Su-7 had many limitations of flight modes, the severity of which did not diminish with the tests, but on the contrary increased, threatening to turn the front-line fighter into a low-maneuverable machine in a straight line. " The technical maintenance made it very difficult for the compact layout and technological hatches of extremely small dimensions, and for access to a number of units it was sometimes necessary to remove several mounted side by side ”(C.80).

Actually, in practice, this resulted in a large amount of time that aircraft required in daily maintenance. Markovsky's word again: “In operation as of 1965 the year when the main problems seemed to be resolved, the labor costs for servicing the Su-7B were 83 man hours per flight hour, which caused legitimate questions to the developers from the Air Force leadership . Paying attention to the unsatisfactory state of the issue. The Commander-in-Chief of the Air Force cited data for comparison on American aircraft of this class, where they were half as much. For example, even with their sophisticated electronics, the standards for training for one flight hour were about X man-hours X-manum hours (C.104-105) for servicing tactical fighter F-45 “Starfighter” and F-101 “Thunderchif”.

Those. the image of a simple and reliable ax of domestic military equipment fades somewhat. What I liked, the author of the book on Su-7 was not limited to just general statistics, but showed where it all came from in practice: “When performing preliminary preparations, without fail preceding the next pair of flight days, on Su-7B for production it was necessary to open the 38 hatches of various units and systems (on machines of different series, their number changed, these figures refer to the aircraft production of the summer 1969 of the year). Of these, 27 manholes required to open a special tool (various-sized screwdrivers) with unscrewing in total 122 screws and screw locks ”(C.102).

We should not think that Su-7 was in relation to the exploitation of a black sheep among peers. Actually, the MiGs were not sugar in this respect either, again the quote: “Thus, when servicing the MiG-21 PF, in the course of preliminary preparation, the opening of the hatches took even more time, and the screws and locks needed to be unscrewed by one and a half times more - 195 pieces. To ensure access to the serviced units of the first MiG-23, it was even necessary to open the 47 hatches with 452 screws and locks, spending almost two hours on these operations! ”(Ibid.).

These hatches are clearly visible on this photo of the Su-7, which has become a teaching aid: 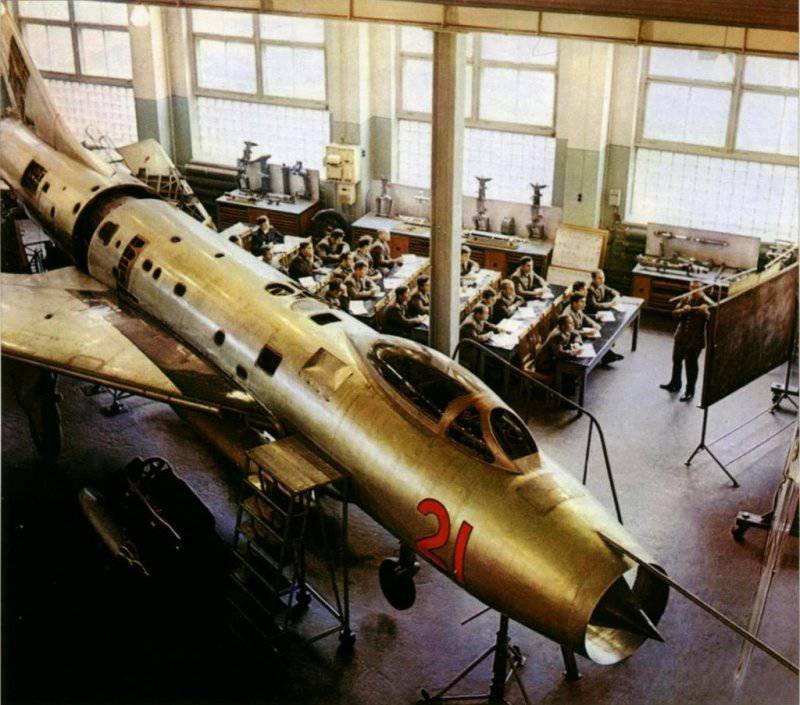 However, all this flowers. The berries begin when the Su-7 rises into the air. Quote: “With regard to the handling characteristics, the pilots evaluated the efforts on the handle as excessively heavy, while the responsiveness of the aircraft to the cottage was too sensitive. According to pilot A Kachura, “after the flight (especially as part of a group to the training ground), I had the impression that I unloaded a wagon of potatoes or coal, especially when you were flying as far as possible, holding on to the rest. And it was a shame that not with the air flow, but with the springs in the automation. Others compared the impressions of piloting the Su-7B with "the work of a tractor driver or driver on the T-34" (C.111).

Further: “The car was strict in piloting and did not forgive either the“ young ”or the“ old men ”. Su-7 was not easy to manage, but it was steadily holding modes. The extremely high sensitivity of the machine in the transverse relation to the deflection of the rudder at the take-off and landing angles of attack repeatedly led to very tragic mistakes during take-off and landing - when giving a foot, the plane abruptly tilted, but sluggishly reacted to the ailerons. Attempting to give back legs led to the lateral buildup of the aircraft, which was already on the verge of stalling and, as a rule, ended with stalling and falling. Often there were breakdown and high-speed pickups, and not a very reliable engine automation system, its voracity and poor acceleration kept the pilot in constant tension throughout the flight ”(C.118).

Design flaws were added to the fire, and the result was a sad picture: “in 1964, one flight incident — an accident or a catastrophe with the loss of an aircraft — for all groups of reasons (including equipment failures, flight errors and technical personnel, guides and flight arrangements , as well as the remaining unexplained factors) for the “sevens” reached 1 770 hours, and the machine according to this indicator was the most alert in the Soviet Air Force. The data spoke for itself: for the MiG-21, this figure was 3 225 hours and even the Su-9 type close to the fighter-bomber stood out almost twice as good as the 3 246 incident hours. The picture did not significantly change a year later: in a Su-7 operation in 1965, one loss fell on 2 294 flying hours, while the safety and reliability of the MiG-21 in the ranks was improved by one and a half times and the raid on these vehicles increased before the exponential 4 650 hours.

It is curious that at almost the same level as the MiG-21, the accident rate of the American F-104 Starfighter, which was called by our propaganda as “a flying coffin” —the machines of this type that served the US Air Force in Europe — was also found in similar weather conditions and relief conditions in Russia, the 1965 data on the flight accident were equal to 5290 hours, demonstrating safety in operation at least three times better than Su-7. As for the other “probable enemy” - the main American fighter-bomber F-105 “Thunderchif”, his service in European conditions was described by absolutely incredible reliability indicators - by flying for one loss in 10 000 hours! ”(C.117). West German "Starfighters" - F-104G - flew into one flight incident 2 970 hours. The percentage of lost during the operation of the aircraft was greater, but flew more in the west.

The problem is shown in the book with specific examples of flight accidents, including those with a tragic outcome. That is, hand on heart, the real level of reliability of the Soviet military equipment was not a fountain. However, they did not report this to the general public. 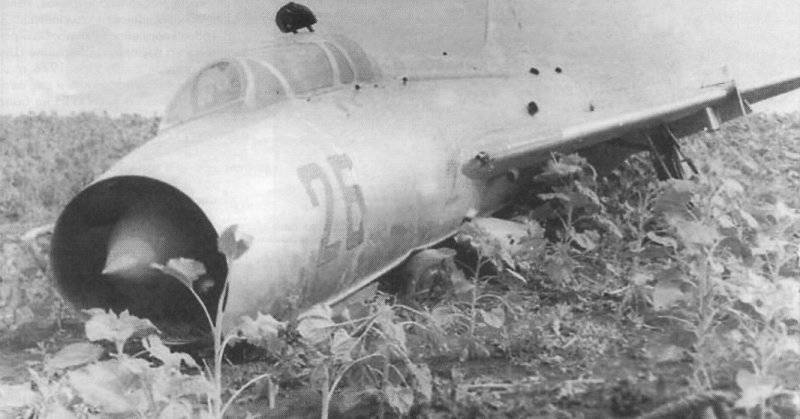 Maybe all this redeemed the high fighting qualities of the aircraft? Here, in general, it is not necessary to be a rocket scientist in order to understand the complexity of hitting a target on a high-speed low-maneuverable iron with a very modest set of aiming and navigation equipment. Actually, as an ordinary Su-7B fighter-bomber was not the ultimate dream. The fighter without air-to-air missiles was conditional, and the same speed that was driven at the beginning of the car’s career influenced the shock capabilities. Markovsky honestly writes: “First of all, the pilot of a high-speed“ arrow, ”rushing over the target in seconds, was difficult to find the object of attack. It was commonplace, even when pilots could not find landmarks and targets even at familiar test sites. It was not simpler to deal with the execution of the strike itself: the visually detected target (and no other capabilities of the Su-7B pilot) was instantly close by, leaving no time for deliberately building a maneuver for attack and aiming, while the Su-7B aircraft radio rangefinder it wasn’t suitable for ground targets, and manual data entry was required to accomplish the aiming task. In order to impose an aiming mark on the target and “calm down” its oscillations, it was necessary, by experience, 4-6 seconds, during which the aircraft, even before dialing, jumped about 900 km / hr during the 1,5 km / h speed. It should have been taken into account that the bombs themselves, dropped at such a speed, flew forward along the trajectory of another 300-500 m. As a result, the attack was required to start almost from the line of target detection, operating at a high pace and with a high probability of errors, which had already been corrected once ” (C.139).

The Air Force command was clearly aware of all this and there were no illusions. Again quote: “Characterizing the state of the shock front aviation and its main aircraft Yak-28 and Su-7B, Commander-in-Chief of the Air Force Marshal of Aviation K.E. Vershinin wrote in 1966: “They have limited capabilities for the detection and aiming of targets, inadequate reach, and a long run and run length. According to their flight data and equipment, these aircraft are inferior to the American F-105D and F-4C, which are all-weather ... ". The aircraft were significantly inferior to them by the weight of the combat load (threefold!), Had no guided weapons, the service and preparation time for the flight remained significant ”(P.142).

After reading all this, my opinion strengthened that the Egyptian NHS about which I wrote earlier not at all cunning.

All this constitutes a less cheap and more realistic picture of the construction of the Soviet Air Force. The country was poor, there was a technological lag and achievements were given a lot of work, and the work of the pilots was not easy.

Ctrl Enter
Noticed oshЫbku Highlight text and press. Ctrl + Enter
We are
About Stalin and KhrushchevWhat you didn't want to know about England
Military Reviewin Yandex News
Military Reviewin Google News
21 comment
Information
Dear reader, to leave comments on the publication, you must sign in.