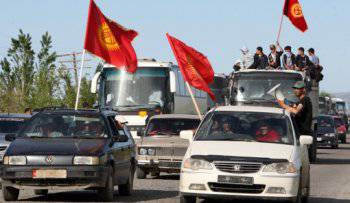 The latest unrest in Kyrgyzstan occurred at a very awkward moment for the authorities of this country. The riots in the Issyk-Kul region began almost the next day after the meeting of the heads of state in Astana, where, among other things, the question of granting Kyrgyzstan an observer status in the Customs Union of Belarus, Kazakhstan and Russia was discussed. Given that Kyrgyzstan’s likely entry into the CU raises many questions, the unrest at Kumtor can have very adverse consequences for Bishkek.


The problem here is not only that the official authorities cannot guarantee the security of specific foreign investments. Although it is also important in terms of the economic development of the country. The problem is that instability in the regions clearly demonstrates the weakness of central government institutions. Consequently, any top-level agreements on the same CU, which will require application in Kyrgyz territory, may be in question.

Even if we in Kazakhstan with its strong centralized vertical of power sometimes have difficulties with the implementation of legislation, for example, there is a problem of ensuring high-quality border control, what can we say about Kyrgyzstan, its border with Tajikistan and China and the adjacent territories.

Therefore, for Bishkek, the unrest around Kumtor took place quite inopportunely. First, the authorities tried to use force and sent riot police. However, then they began to negotiate with the protesters, including the possible change of agreements with the Canadians owning Kumtor. In addition, Bishkek replaced the governor of the Issyk-Kul region, on June 1 Prime Minister Jantoro Satybaldiev went to the rebellious area, and on June 3, the state of emergency imposed by 31 was lifted due to “normalization of the situation”.

The first reaction from the state - to restore order, was quite logical. But the security services failed to quickly take control of the situation. There were clashes, victims appeared, it was reported that special forces were blocked in a boarding house. Therefore, the authorities quickly changed tactics.

In addition, riots began in the south, in Jalalabad, where supporters of the convicted leader of the Ata-Jurt party Kamchibek Tashiev 31, the local administration was seized on May, the strategic road was blocked, and unchecked reports appeared in some other areas in southern Kyrgyzstan. And this is already very dangerous for the current Kyrgyz authorities, given the fact that they rely to a greater extent on the support of mainly northern parties and politicians. Of the three parties that support the current Prime Minister Satybaldiev, who comes from southern Osh, two in the parliament, Social Democratic and Ar-Namys, are largely considered northern.

In this situation, the Kyrgyz authorities did not have much choice. They have no limit on the use of state power, or rather, they have exhausted it in the first days after the start of the conflict around Kumtor. At the same time, the authorities do not need two hot spots in the provinces. Therefore, they, most likely, preferred to quickly reach an agreement in the north in order to concentrate all their efforts in the south. Moreover, the conflict in Issyk-Kul does not have a political component, here you can simply pay off by promising to fulfill certain requirements. In the south, the situation is more complicated, here we are talking about the seizure of government bodies and the performance in support of the arrested politician.

But if this is so, then this means that the authorities again gave way to one of the protesters, this time on the issue of the nationalization of Kumtor. Premier Satybaldiev proposed an intricate formula for withdrawing a mine from the Canadian company Centerra and re-registering it in Kyrgyzstan. According to him, in this case, the return from Kumtor for the republic will be greater.

In principle, this is also a review of existing agreements. Moreover, made under the pressure of the crowd of local residents. One can argue how fair the treaty itself was with the Canadians. You can even demand its revision. In the end, you can even make nationalization. After all, Argentines nationalized a branch of the Spanish company Repsol last year. But it is important that the initiative on this ambiguously evaluated issue comes from the state, and not from local residents. Because it is the state that will then need to build relations with the international community and act in the interests of all the inhabitants of the country, and not the population of a particular region.

Otherwise, every locality where there is a deposit of something valuable will tend to follow the example of the Baphoken tribe in South Africa. The latter achieved from the Anglo-American company a share in the revenues from platinum mining in the territories under its control. Today, 300 thousand members of the Bafoken tribe live much better than the vast majority of South African citizens, including their closest relatives from neighboring tribes.

The strength of the regions and provinces is directly proportional to the strength of the central government. The weakness of the central government leads to the strengthening of the provinces. In Western democratic societies there is no problem in this, relations between communities, provinces and the state are clearly defined and spelled out in laws. In the conditions of Eastern society, the law is often not the law, but the right of the strong. As a result, the weakness of the state does not lead to democratization on the Western model, but the creation of sometimes very tough systems of power on the ground.

The example of Kyrgyzstan is very significant. For example, recent unrest in the south of the country did not affect the city of Osh. Because the real power here belongs to the local mayor, whom the central authorities cannot remove. As a result, the relationship between Bishkek and Osh is based on agreements that provide for responsibility for maintaining order on the ground. This is very similar to how Moscow negotiated with Ramzan Kadyrov in Chechnya.

But the state does not get stronger from this; it is not a more reliable partner in the foreign policy arena. Because such instability of the central government makes it dependent on external and internal pressure. It is significant that the latest unrest occurred after Kyrgyzstan once again made its geopolitical choice.

Therefore, the question of whether Kyrgyzstan should be admitted to the CU remains open. As well as the question of the withdrawal of the American base from Manas. Because Bishkek will have to somehow compensate for the losses from the lease of Manas, and also think about how to minimize the possible budget losses from the planned changes in the status of the company developing Kumtor.

Ctrl Enter
Noticed oshЫbku Highlight text and press. Ctrl + Enter
We are
What you didn't want to know about EnglandAlexander Knyazev: The stage of "Afghanization" Kyrgyzstan has already passed, ahead - the prospects of Somalia
Military Reviewin Yandex News
Military Reviewin Google News
9 comments
Information
Dear reader, to leave comments on the publication, you must to register.