Dalgat Amirov - Head of the bailiff service of the Republic of Dagestan, son Said Amirov.

Good job, Said Dzhaparovich. So try to arrange your relatives for bread posts if there are huge problems with unemployment in the Republic of Dagestan! For this alone, the mayor of Makhachkala, who loved in his house with the presence of a special room in the form of a bunker to watch the football matches of his favorite team, should be standing up for applauding. But this is still not a complete list of all employed relatives, including those who are not the closest ones, in whose fate Said Amirov took the most direct part. He placed his people in all power systems, established control over the business, and with a sense of duty performed to the people of the republic, indulged in the contemplation of a combination game (on the football, political, and economic fields). 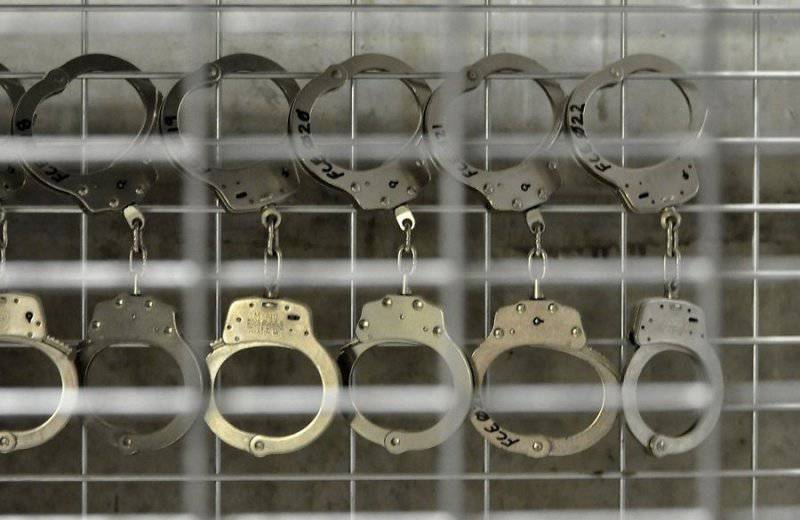 But this time the combinations of their development did not receive. Said Amirov was knocked to the house, to put it mildly. A knock came after a helicopter circled over the scene, and armored vehicles appeared on the surrounding streets. The spetsnaz fighters politely knocked ... They were the first to hit the house of a man who, by the end of 2012, was recognized as nothing less than the best Russian mayor.

The meeting of the best mayor with the visitors, for all its scale, was surprisingly calm. The calm of the mayor is, in principle, explicable. Well, why panic a person who survived as many attacks as would be enough at once, for example, on several Roman Popes ... One such attempt resulted in Amirov being deprived of the opportunity to move independently, moved to a wheelchair, then in Republic got the nickname Roosevelt. They blew up, fired them automatically. weapons and even grenade launchers - Said Dzhaparovich survived everything, and here, you understand, some FSB special forces - is it worth worrying ...

A large number of questions "Roosevelt" did not ask the operatives. The only thing that interested him was “who dared?” Who put their signatures on the document of his arrest on charges of organizing an attack on the life of the person conducting the preliminary investigation? This very person was Arsen Hajibeyov - an investigator whose subordinates "dared" during the investigation of cases of a whole series of terrorist acts in Dagestan to search the building near the "father" - in the administration building of the Makhachkala city administration.

The fact that the question in the style of “who dared” for Mr. Amirov was the main one is not surprising. The fact is that Said Dzhaparovich himself and the whole scattering of his high-ranking relatives, over the last few years, apparently managed to make sure that everything in the republic was caught: what is called, the mouse will not crawl without permission. As it was sung in a Soviet children's song: “Even a chicken is rushing according to your order.” So this very thing, apparently, so intoxicated Amirov while he was in the mayor’s seat in the Makhachkala mayor (from 1998), he sincerely didn’t understand how someone could have dared to issue a warrant for his arrest.

Amirova was urgently transferred to Moscow, and this transfer was reminiscent of the plot of one of the blockbusters: helicopters, armored vehicles, masked men and body armor. Now Said Dzhaparovicha has a lot of time to think carefully about who the very person who gave the go-ahead for the “popularly beloved” mayor to be sent to prison under guard. Although to understand this, Amirov clearly does not need much time. After all, he should remember very well the words of the acting head of Dagestan that an irreconcilable fight against extremism will now begin in the republic, even if the main harbingers and accomplices of terrorism and radicalism are in the highest echelons of republican power. Such words Ramazan Abdulatipov said at a meeting with the president, which was held relatively recently.

It was after that meeting that Abdulatipov probably gained the support of the president in matters of real order management in Dagestan. But if so, then the question arises: why did Said Amirov, who once formed the militias who opposed the Chechen fighters in 1999, was one of the first "attention" from the capital's operational groups? Why is it Said Amirov, if in old reports of news agencies he was called one of the main enemies of Basayev and Khattab? Why precisely Said Amirov, if it was he who was one of the first United Russia activists in the region?

The answer can be simple: the former merits no longer count! After all, these very past merits managed to fade considerably from the further activity of the mayor of Makhachkala, who seemed unchallenged and inviolable. And a certain light on this very activity, according to some information, was managed to shed by Sirazhudin Guchuchaliyev, who was the head of the Makhachkala militant group until his arrest. This very Guchuchaliyev clearly revealed certain maps, after which a serious movement began in the North Caucasian republic, which was choking with terrorist activity. The first to go was the deputy mayor of Kaspiisk - the same Dzhaparov, who belongs to Amirov's blood nephew. For Dzhaparov - a few more senior regional officials. Well, and then the wheel has come to Amirov himself. At the same time, the representatives of the investigating authorities said that they had been “stealing” the mayor of Makhachkala for about two years, and all this time, incontrovertible evidence of Said Amirov’s involvement in the Dagestan gangs was gathered.

Apparently, this evidence was collected in vain, after which the best mayor was plunged into the “funnels” without leaving the territory of Dagestan in order not to provoke possible speeches of its main supporters. And among these supporters there are gentlemen with a rather dubious type of activity, the development of which today, according to investigating authorities, is also underway.

Now another question: could a person who held the post of chief mayor of one of the most troubled regions of Russia for a decade and a half stay outside the criminal field? Could the operatives, as they say, grab the wrong one? Theoretically, of course they could, but only the probability that Amirov is exceptionally white and fluffy, even on the outer edges of this storiesremains extremely minimal.

First, if the words about the two-year observation of Amirov are true, then for such a period of time it is simply impossible not to gather an evidence base, if there is one. Another thing is what the cost of collecting this evidence base has been: numerous acts of terrorism, murders of employees of the Ministry of Internal Affairs, religious leaders, influential businessmen, ordinary people who have become innocent victims, billions of laundered rubles and much more. The price is extremely high, and therefore I want to believe that the wasp's nest, from which the main threat spread in Dagestan, was definitely destroyed and could not be restored.

Secondly, the list of high-ranking relatives of Said Amirov, which is given at the beginning of the article, also indirectly indicates that the work of the Makhachkala mayor clearly differed in the direction of family well-being. And such well-being against the background of mass strife throughout Dagestan looks strange ... This is the most obvious example of the clan system that has taken root throughout the North Caucasus (as a whole) and throughout Dagestan (in particular).

Apparently, the charges of Amirov only in organizing the assassination attempt, which resulted in the death of Arsen Hajibeyov, will not be the only one. The investigation has data from Said Amirov's connection with the so-called collective farmer gang (tractor driver).
A collective farmer in Dagestan is called such a man as Magomed Abdulgalimov. This is the former assistant of the Kizlyar prosecutor, who is another relative of Amirov. There are dozens of murders and attempted murders on the gang's account (Dagestan prosecutors, members of the Investigations Committee, heads of Dagestan companies). If all these facts are proved, then the best mayor may well spend the rest of his life behind bars, like many of accomplices.

It remains to hope that work in the region will be brought to an end, and the Dagestan long-term fire will be extinguished. And this task for the same Ramazan Abdulatipov looks, perhaps, more difficult than cleaning the Augean stables. To go against the system of total collective responsibility built up over the years alone is deadly, and these are not empty words for Dagestan. The decisive word is for the central government and the Dagestan people, who are clearly tired of turning the republic by certain forces into a large powder keg and an economic black hole.