7 2013 June
48
Last month Islamists, remembering Allah, killed 25-year-old military man Lee Rigby, a machine gunner and a drummer, in London. In the same May, 25, patrol Cedric Cordier, in the Paris business district of La Defense, tried to cut his throat, attacking from behind. A typical terrorist migrant attacked the Frenchman: a bearded man in a leather jacket. At the same time, in the city council of Radstock (a town in the county of Somerset), the authorities banned the use of the St. George flag on their territory: they decided that a flag with a cross could offend the feelings of Muslim residents of the city. Muslims live there sixteen people. You can also mention the pogroms in Sweden (Husby district in Stockholm), in which the "comers" also actively participated. Against the background of all this madness, the latest attempt of the European Union states to return visas, borders and barriers to them looks quite rational. 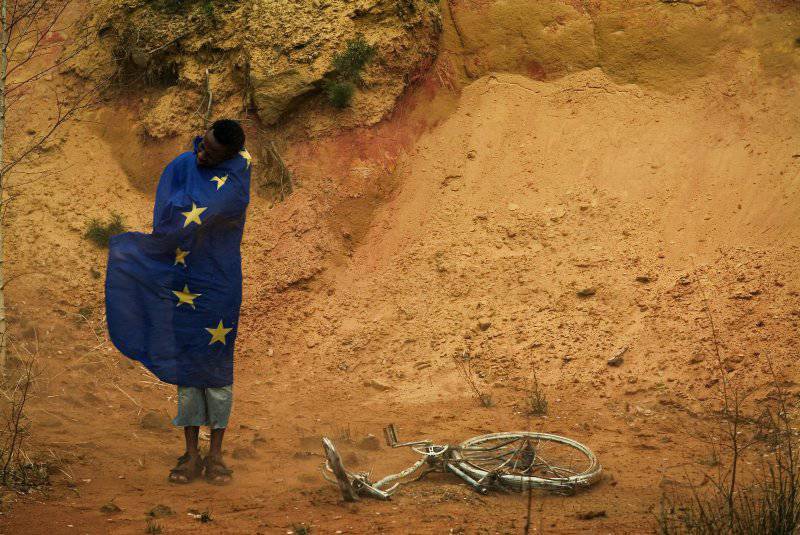 In the coming days, the EU interior ministers are likely to officially confirm the need for border control reform in the Schengen zone. Actually, the top heads of the Ministry of Internal Affairs were the initiators of the reform. The reason for the upcoming border reforms was the fact that many states signaled: they feel insecure because of thousands of illegal immigrants.

As recalled by the Kaliningrad portal, after the negotiations of the European Parliament and the European Committee for the reform of the Schengen Agreement, it was decided: border control in each state of the zone can be returned (no more than two years). Moreover, each country can return this control independently, if only it admits that it is experiencing an influx of too many immigrants.

The previous principles of the Schengen Agreement allowed for the temporary return of control at the internal borders of a given state "in the event of a serious threat to public order or internal security." In 2008, Austria regained control of the European Football Championship; Poland considered a similar opportunity during Euro-2012. The impetus for considering the possibility of a general reform of the Schengen Agreement was an influx of refugees from the north of Africa after the launch of the “Arab spring” (2010-2011).

Journal "Expert"referring to RIA "News”, In an editorial specifies that the EU authorities intend to also engage in improving the system of integrated protection of the external border. The European Agency for the Management of Operational Cooperation at the external borders of the EU countries is already tasked to periodically assess the risks arising from the fulfillment of new requirements by states.

The interlocutor of the news agency said: “Where it will be established that the security of the Schengen zone is seriously endangered, the European Commission will be able to propose the restoration of border controls within a limited period. But this will be an extreme case, and any recommendations of the European Commission on this matter require the consent of the EU Council. ”

It is reported that the new requirements are planned to apply to candidate countries to join the Schengen.

The “expert” recalls that the reason for the development of new legislation on the reform of the security mechanisms of Schengen was the migration dispute between Italy and France (April 2011).

Not coping with the flow of refugees from North Africa, Italy began to issue them temporary residence permits. These documents opened the way for migrants to move around the Schengen zone. The refugees rushed to France, and this country referred to the rules of Schengen. Paris said it would allow only migrants with passports and enough money to live in the country and leave it after some time to enter the country. Having settled the conflict, Paris and Rome appealed to the European Commission with a request to revise some of the provisions of the Schengen Code.

Galina Dudina (Kommersant) indicates that the European authorities assure: in the case of the introduction of border control of the difficulties with movement within the EU, holders of Schengen visas will not arise. However, from now on they will have to go through the procedure of checking documents within the EU.

Oleg Severgin ("Voice of Russia") cites the headlines of the European media: “Barriers are returning,” “Closing the borders as a last resort,” “The principle of freedom of movement is being gradually emasculated.”

The new rules, the author writes, give EU states the right to introduce emergency border controls for up to six months - and not only if there is a threat to internal security. The barrier at the borders can be lowered if illegal migrants begin to arrive en masse, who could not be stopped at the external borders of the EU.

These agreements must be approved at the plenary session of the European Parliament in Strasbourg - from 11 to 13 in June. No one has any doubts in the statement: the majority of experts consider the signing of securities as a formal act.

As the representative of Germany, Francis Keller, an expert of the Green Party in the European Parliament on migration policy and border control, said, the European Parliament suffered a complete fiasco, proving itself in the most pitiful way when defending one of the most important EU achievements. The deputies, Keller summed up, allowed the EU member states to “bring the ax over the Schengen”.

But the head. Sergei Utkin did not consider the temporary strengthening of border controls as a blow to Schengen as a sector of European integration of the Institute of World Economy and International Relations: “If you carefully read the European Union’s conclusions on the Schengen zone, it is emphasized everywhere that only in the most extreme case can we resort to some restrictions and that these restrictions should be temporary. Unfortunately, all these reservations in the press disappear, there are only catchy headlines that "Schengen is falling apart" and the like. This is nothing more than journalistic exaggeration. ”

Sergey Duz ("Voice of Russia") says that, most likely, EU countries will be able to resume border controls within their borders from next year. According to the analyst, “it will be possible to put a cross on the beautifully dreaming dream of a single open Europe. In essence, the continent will turn into a besieged fortress, not only outside, but inside as well. ”

Evgeny Voiko, a senior lecturer at the Department of Applied Political Science at the Financial University under the Government of the Russian Federation, told the Voice of Russia on this topic:

“Certainly, the security factor here. For quite a long time, the European public is outraged by the fact that migrants become participants in various criminal scenes. It starts to bother and causes some concern for the fate of their children. I think the recent murder of a British soldier in London added fuel to the fire. This is theme number one. Not only from a humanitarian, but also a political point of view. Since in the 2014 year, the EU will have parliamentary elections. And in some countries, for example, in Germany, they are expected already this year. And, of course, the leaders of European countries are trying to attract votes with their willingness to deal with the long-running problem. ”

And the president of the 21 Century Migration Foundation, Vyacheslav Postavnin, draws attention to the material aspect of the problem. He focuses on the European crisis and unemployment. And migrants - they after all receive money, social benefits. In the migration camps they are fed and maintained. Migrants cost Europe dearly, the expert said. Hence the attempts of European countries to limit the number of illegal migrants.

“Under the distribution,” recalls S. Douz, today not only immigrants from Africa, but also from Eastern Europe fall. According to some reports, over the past 3-4 of the year, after the abolition of the visa regime for Serbia, Montenegro, Macedonia, Albania and Bosnia and Herzegovina, the number of people seeking asylum in rich European countries has increased by 2-3 times. Applications for those who wish can be considered for as long as desired, but the nuance is that all the time it is considered by the authorities of the host country are obliged to support refugees. Not surprisingly, many rush to the blessed Western Europe - as in a sanatorium.

“The pros outweigh the cons. This is a certain standard of living. Still, if we take the same Britain, we see the attitude of the state towards those left without housing: they are given not just similar housing, they are given a place in a hotel far from the lower class. Social guarantees, especially in Northern Europe, attract many. Here, with minimal effort, you can get maximum pleasure. Moreover, the information is distributed fairly quickly. This is not the first wave of immigrants. They do not need to earn a living or earn a living. ”

To understand what kind of practice awaits the countries of Europe when applying the amendments, one should refer to the figures. Where do you get them from? From the western press.

For example, the publication "Die Presse" writes that the number of illegal border crossings in the Schengen zone last year was halved. To some extent, this indicator can serve as a “test” of the Commission’s report on free movement within the EU, which was presented in Brussels. From October to December 2012, there were a total of 13.613 illegal intersections, or 52 percent, from the same period last year.

A particularly sharp drop in illegal intersections since August last year was recorded in Greece - thanks to strict control on the land border with Turkey (30 percent, or 4035 people). A good indicator of the decline and Italy - 31 percentage (4231 people). 59 percent is an indicator of the reduction of illegal border crossing at sea borders.

Currently, the Schengen zone includes 26 states and more than 400 millions of citizens. The emergency action of the new amendments will be six months, but it can be extended up to two years.

The article notes that the number of applications for visas from the Western Balkans in January 2013 was 44 percent lower than in the same month last year. Albanians (up to 74 percent) and Bosnians (up to 51 percent) more often than others wanted to get visas. The most popular destinations in the EU are Germany, Sweden, Belgium, Switzerland and Luxembourg.

Judging by the Schengen innovations being promoted, let us add, the countries of Western Europe are going to completely block the channels of illegal migration, which have already narrowed significantly in 2012 year. At the same time, it should be noted that the EU leadership and the authorities in each country intend to be cautious about applying the amendments. Illegals are illegal, crime is criminal, Islamism is Islamism, and EU budgets should not lose money. Therefore, those analysts who argue with a cool head are right. Europe will not shut up tight.

Is the same "Die Presse" in another material quotes the Minister of Internal Affairs of Austria Johanna Mickle-Lightner. She welcomes the reform of the EU Schengen Agreement and says: “We can be very pleased with this package, because all our basic requirements have been taken into account”. But he adds clearly: “Now there is no reason to introduce strengthening of border control.” Mickle Lightner also notes that social tourism may suffer, as has already been noted in Germany.

Observed and translated by Oleg Chuvakin
- especially for topwar.ru
Ctrl Enter
Noticed oshЫbku Highlight text and press. Ctrl + Enter
We are
Results of the week. "The truth can not be insulted"Results of the week. "Of course, he is guilty, but he ... is not guilty ..."
Military Reviewin Yandex News
Military Reviewin Google News
48 comments
Information
Dear reader, to leave comments on the publication, you must sign in.