Paul Goble: “Russian national identity is the weakest in Eurasia” 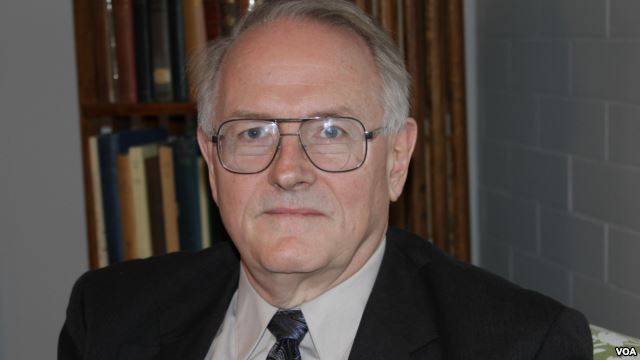 Washington political analyst Paul Gobl, the author of the blog Window on Eurasia, shared with the Russian service of Voice of America an analysis of the processes taking place in Russia and assessed American-Russian relations.


Fatima Tlisova: Diametrically opposite assessments of the state and prospects of US-Russian relations are heard on different sides of the Atlantic, and there are extreme pessimists here, but there are also extreme optimists. What do you think?

Paul Goble: I think we in the US are finally moving in the direction where Russia no longer occupies a central place in foreign policy. For a very long time, we lived in echoes of the Cold War, when the whole world revolved around what was happening in Washington and in Moscow and the development of relations between the United States and Russia.

Today there is a much more realistic assessment of Russia - as a regional power, but not as a global superpower, which it really is no longer. It also seems to me that now a clearer understanding has come that all our hopes of the beginning of 1990's are that Russia will become a democratic country, a free market country, where the state would protect the rights and freedoms of its citizens and ensure the share of all residents of the country in the incomes from the enormous natural riches - all these hopes are crossed out.

This does not mean that progress is impossible. The fact that the United States and Russia are now outside of the situation in which there were only two choices — either a new cold war, or absolute agreement and cooperation — means that we entered a period when cooperation in narrow spheres became more real. .

There are problems whose solution involves the interaction of the United States and Russia, but there are still problems in which such cooperation is absolutely impossible. Our relations at the new stage will be neither exclusively friendly nor exclusively hostile.

We can speak at close positions in solving the problem of piracy, but it’s hard to imagine that we cooperate in maintaining Europe’s dependence on Russian gas, simply because we have different interests in this area. It seems to me that in Washington, there is a growing understanding of this situation, and this is a healthy approach to identifying those areas where cooperation is beneficial to both parties.

F.Th .: Some analysts in the West, as well as in Russia, view the upcoming Olympic Games in Sochi in 2014 as part of the idea of ​​“reviving a great Russia”. What do you think about it?

PG: It has become absolutely obvious that the Sochi Olympics, which Vladimir Putin planned as a symbol and the highest achievement of his presidency, will most likely turn into his biggest failure. I say this not because some kind of violence will happen there, and not because I expect a broad world boycott - but based on the experience of the Games in other countries.

When you are planning an international event that attracts the attention of the whole world, people see not only what you are showing them, but also something that you would very much like to hide. The more closely the journalists of the world look at the situation around Sochi, the more ugly it manifests itself.

We learned about the slave status of migrant workers in Sochi. We have learned about massive corruption - although much has not even been built, these games have already become the most expensive stories - evidence that most of this money goes to the offshore accounts of Russian officials.

We saw the barbaric seizure of the snow leopard in Siberia - just so that Putin could pose for the cameras. We will see much more detailed reports that 150 years ago, Sochi became the site of the greatest genocide of the 19 century, which led to the death of hundreds of thousands of people and the expulsion of the Circassians from their native land to the Ottoman Empire.

No matter how hard Vladimir Putin’s propaganda machine is, it’s powerless to resist it — simply because it’s journalism — for objectivity, they will need to balance the Kremlin’s statements with reports that the Kremlin doesn’t want.

In the end, for the Western public, who knows almost nothing about the Caucasus and never heard of the Circassians, this strange word "Sochi" will get a face. Thanks to the history of the region, thanks to the behavior of Moscow officials and personally Vladimir Putin there, this face will be ugly. This will be a black mark for Vladimir Putin, perhaps even the impetus that will force more and more Russians to doubt the legitimacy of his presidency.

FT: The press in Russia is increasingly reporting manifestations of national intolerance, both from Russians and from representatives of other ethnic groups. How do you explain the surge of national identity, and what can this result in the future for such a multinational state as Russia?

PG: It seems to me that in order to understand the depth of this process, you need to look back at the history of the country, look at the reverse side of imperial thinking - over the centuries, the assertion of the superiority of the Russian nation occurred not through the prism of Russian identity, but through the ability to suppress other nations.

Now in Russia there is a visible weakening of the positions of ethnic Russians against the background of strengthening the positions of non-Russians. This is an objective process, due to many factors, including low birth rate among Russians and high birth rates among non-Russians, migration from the countries of Central Asia and the South Caucasus in the complex leading to a sharp drop in the percentage of ethnic Russians in the total population of Russia.

On this account, there are contradictory statistics, it seems to me that it would not be a mistake to say that now in Russia ethnic Russians do not exceed two thirds of the population. This is a dramatic drop compared to 1991 in the year when Russians made up 90 percent of the country's population. As a result, Russians feel themselves in danger, therefore the idea of ​​the “big Russian brother”, the state-forming mission of the Russian nation is just the flip side of the fears of the Russian people.

It seems to me that the fact that the Russians spend so much time in disputes about the “national idea” is not so much a reflection of the cultural style as a symptom of a serious social disease, a dangerous disease, because if the Russians don’t manage to accept the loss of the empire, they risk becoming in international rogue.

F.Th .: It is believed that the policy of centralization of power pursued by the Kremlin negates the idea of ​​federalism or regionalism in Russia. How do you think the concentration of resources in Moscow is effective in controlling the provinces?

PG: When you observe the processes in Russia from a remote position, the unexpected growth of regionalism within the Russian Federation is striking. Revival and strengthening of Siberian identity, Eastern identity, Pomeranian - in the North, Cossack - throughout the south of Russia. This identity revolution reflects two important trends and points to a third.

First, this is a reflection of the fact that, contrary to the beliefs of most people, the Russian national identity is the weakest in Eurasia. Self-identification, for example, among Avars, Armenians or Ukrainians is much stronger than among Russians. In many ways, the Russians turned out to be the main victims of the state named after them. They were allowed to govern, but only at the cost of abandoning their own development as a nation. As a result, fragmentation occurs.

Geography and poor management are also contributing. You cannot drive by car from one end of the country to the other, because there are no normal highways, the railways are rusting, most airlines are squeezed out of business and are no longer functioning - huge parts of the country are isolated from each other. As a result, regional alliances are formed. The same type of regionalism that was brutally suppressed by Boris Yeltsin in the middle of the 1990s is being reanimated.

Combining and restraining the growth of regionalism and sub-ethnic Russian nationalism will be a serious challenge for the center. In the medium and long term, the growth of Russian sub-ethnic nationalism is a much more serious threat to Moscow’s ability to control the situation than any other “non-Russian” national movement.

F.Th .: The picture of threats described by you differs from the more popular one - the North Caucasus is considered to be the most dangerous and uncontrolled region of Russia. What are your estimates and predictions of achieving stability?

PG: There are two views on the North Caucasus. According to one, the North Caucasus is a collection of different nations, each of which pursues its own interests and goals. According to another, nationalism has been supplanted by Islam, Islam is the only glue capable of keeping the region from collapsing, Islam is also a threat equivalent to terrorism. I am convinced that, contrary to popular belief, Islamism has not taken such deep roots in the North Caucasus as many people think. One of the reasons why Moscow speaks so much about Islamism in the Caucasus is an attempt to justify any degree of repression that the Russian government uses there.

In my opinion, in the North Caucasus, there is a revival of the leading role of ethno-separatist ideas, I am convinced that we are witnessing the construction of national proto-states, potential states. The repressive policy of the Russian government does not work, because it does not have sufficient resources to carry out repressions of such a level and for such a long period of time to achieve final pacification, they do not have sufficient resources to bribe the entire population of the Caucasus. Therefore, Vladimir Putin made a bid to bribe the elites, hoping to achieve complete silence.

But on the example of Chechnya, we see that the result is not the one that Moscow thought about. For several years Chechnya has received unimaginable sums from Moscow, and today Chechnya is much more Islamized than in the entire history of its existence.

Speaking of stability, you need to remember that there are several of its varieties, and you need to know exactly what kind we are talking about. What about stability within individual republics? About stability within the region as a whole? Or about stability between the region and Moscow? I think that if the Russian government does not plan to spend significantly larger sums in the Caucasus and does not want to become smarter and more cautious in the use of force, relations between Moscow and the North Caucasus will become increasingly unstable.

And the question is not how many people go into the forest, the question is what kind of future do people in the North Caucasus want for themselves. According to my feelings, we will see a decline in violence and terrorist activity, but the region will increasingly move away from Moscow. We will also see the solidarity of the proto-states over the next decade.

Ctrl Enter
Noticed oshЫbku Highlight text and press. Ctrl + Enter
We are
About Stalin and KhrushchevWhat you didn't want to know about England
Military Reviewin Yandex News
Military Reviewin Google News
151 comment
Information
Dear reader, to leave comments on the publication, you must to register.