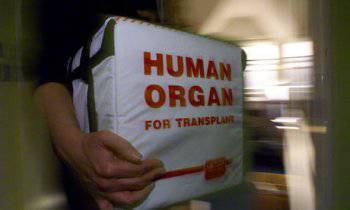 Whenever it comes to traffickers with human organs, such territories as Kosovo, China, Bangladesh or a number of African states are introduced. I want to believe that the black work of businessmen who earn money on human lives is anywhere, but definitely not here. However, such hopes, unfortunately, face a harsh reality. And this reality is such that the Russian Federation is also entering the world market for trade in human organs, often as an accessory market for the global system.


Naturally, to give an accurate estimate of the volume of this market is impossible by definition, but if we proceed from the arithmetic mean of the figures published by various publications, then these volumes are estimated at billions of dollars a year. The world centers of illegal organ trade are Kosovo (in Europe), China and Bangladesh (in Asia), countries of southern Africa. In this case, these countries can be called the primary markets of donor organs. Further, the kidneys, parts of the liver and many other internal organs of people can go to the countries of the European Union, the United States of America, Canada. Italy is among those countries that have long been chosen by representatives of groups that are engaged in the illegal trade in human organs.

Several years ago, representatives of the Italian government published a truly terrible figures. It turned out that over the past 30-35 years in the Apennine Peninsula, more than 9,8 thousands of children and adolescents have disappeared without a trace. All these minors were listed as missing by the controlling authorities. At the same time, almost 83% of all children missing in Italy came from other countries. More than 95% of the number of foreign children fell into the Apennines through the adoption agencies of children who worked on behalf of Italy abroad. The very NGOs and NGOs ... As a result of the investigation, which was conducted by Italian law enforcement officers and local journalists, it was possible to establish that the overwhelming majority of children, when they arrived in Italy, were supposedly sent for treatment to remote clinics in order to improve their health. Only here in the clinics traces of children were lost. There was a patient - no patient. It seems to be discharged, but in the family that adopted him according to the documents, did not appear ...

This gave rise to a full-scale inspection of all those organizations that were engaged in, let's say, the supply of foreign children to the territory of Italy. Local police seized documents from citizens who facilitated adoption. The very first steps of this large-scale verification revealed dozens of fictitious adoptive parents. Some families got involved in police development after it turned out that they adopted 10-12 children from various Eastern European countries. Many families that were passed on in documents by adopters of foreign minors did not exist at all. But there were fake documents on their names.

At the same time, certain questions to the Italian adoptive parents also arose with the Russian investigating authorities. It all started with the fact that nobody responded to the requests of the Russian guardianship bodies, which gave the green light to the adoption by the Italians of Russian children, from Italy. Colleagues from the Apennine Peninsula most often simply did not have the opportunity to provide Russians with information about the fate of children adopted through special agencies, because they themselves did not know anything about the fate of the children. Then the Russian guardianship agencies were forced to ask for help from the law enforcement agencies.

When large-scale inspections of firms involved in the adoption of orphaned children began in Russia, the activity of the organization called “Arcobaleno” (“Rainbow” in Italian) caused the greatest number of questions for operatives. One of the most active agents of this company was Mrs. by the name of Fratty. After getting acquainted with the activities of Signora Fratti in the Russian Federation, and her activities to solve problems with the adoption of Russian children began as early as 1993, it turned out that in total, under the mediation of Fratti, 1260 minors from Russia were personally transferred to Italian families. At the same time, the Italian colleagues were able to submit reports on only five adopted children. Five of 1260!

It turns out that this very Fratti, which turned out to be Nadezhda Schelgacheva, a former crane operator from the Volgograd region, who married an Italian citizen, was active in persuading the heads of orphanages of several Russian regions, sending children to certain death. “Persuasions”, not without a monetary component, concerned the mass adoption of children by Italian citizens (according to fictitious documents, including). At the same time, most of the adopted children were taken abroad, where they were immediately sent under the knife by “black” surgeons.

In the middle of 90's, Russia was absorbed in other problems in order to turn its attention to the activities of a certain Italian signor who allegedly carried good Russian abandoned children. In this regard, you can ask a question about where democratic Italy was looking, and why was there no strict accounting and control of arriving children from abroad and their future fate in the country? The fact is that the legal field in that very democratic Italy, as is known, had and has its own specifics. And the corruption component of the presence of so-called mafia groups in this country is a problem that our European comrades have not been able to solve for decades.

Obviously, these same mafia groups had a direct interest in the implementation of the children's internal organs, and signora Fratti was used by them as an intermediary who received her percentage from the bloody business.

More than 10 years Nadezhda Schelgacheva somehow inexplicably managed to avoid punishment, although the facts of bribing officials, the use of fake documents, communication with the "black" surgeons of Europe, it would seem, were indisputable. But the administration of justice in the end still took place. Only here is the result of his strange.

Four years on probation for 1255 perished Russian children, which they brought to the meeting "democratic humanism", towards the "bright European future." Is punishment commensurate with crimes? ..

And how many agencies such as Raduga have worked and continue to work in Russia. And after all, the leaders of most of them will prove with foaming at the mouth that their task is to give abandoned children of Russia new families abroad. No - of course, there are those adoption agencies that are really ready to work for the good, but who can guarantee that they are in the majority. How many more such Fratti, who know that they are waited for a maximum of four years conditionally, use Russian children for their bloody purposes.

But let's not forget that the old woman Europe now stands on the path of legalizing same-sex marriage with the right to adopt minors. What a huge field for manipulating children! The same corrupt employees of the guardianship bodies (and such ones can be found) can send Russian orphans to European families using special agencies through special agencies in, say, two fathers in a child ... Who guarantees close monitoring? The answer is: no one.