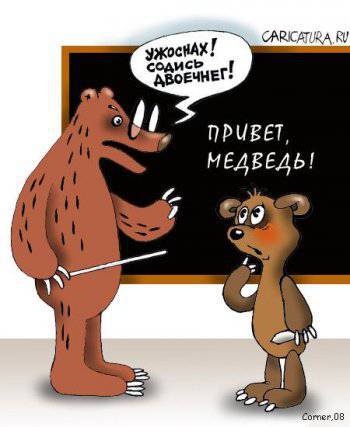 Negative changes in the language are not as harmless as it may seem at first glance ...


June 6, just on the day of Alexander Sergeevich Pushkin’s birthday, in Russia, in accordance with a presidential decree, will be celebrated the “Day of the Russian Language” for the third time.

This in itself is wonderful!

It would be necessary to rejoice and have fun, praise the great and mighty Russian language, and those who created unfading artistic works on it.

But, unfortunately, looking around, you feel far from a festive mood. The state of the mother tongue and the treatment of people is of great concern. Being the leading foundation of the Russian state, the language is constantly experiencing all sorts of "pressure".

Everybody tries his best to kick, humiliate, spit on the Russian language, as if the enemy was treacherous before him. From the high-ranking important persons who use the camp zone jargon, the thieves of the argo (style layer) to official jobs, to the unemployed loafers, in the morning he spews savory curses.

You will hear and hesitate: do Russians say all this?

I would refer them to the "incomprehensible nationality"!

Neglect of the native Russian language has penetrated everywhere in the “social pores”. There are plenty of examples, really, I don’t know where to start. For a while I was absent in Vologda and, returning, I saw her "with a fresh look." At the entrance from St. Petersburg hung a huge poster, on it - below the belt a woman's body, the inscription in bold letters: "DEFACH SIZE 1".

Nearby is a similar “picture”, but with a different name: “DEFFOCHKI”.

Already in the city, driving through a flax factory, I saw the same “art” in a residential neighborhood.

"Art" is not very tied to the appearance of the old Russian city. Moreover, it caused rejection, outrage. I tried to find out in the mayor's office who are the authors of the “numbers” and “deffochek”? “We can’t do anything,” they told me, “this is a private initiative!” Wow, the owners of the city! They took it and they would ask the residents if they need such “word creation”? To the question why someone who hangs up advertising, distorts the Russian language, he received the answer: "These are their problems."

There was no longer any doubt that the Vologda City Hall did not intend to defend the Russian language. This is for them - "an unbearable burden", not included in the official duties. Hence the corresponding results.

Above the main street, the announcement hung wide-lined: “Vkusmyatina! Hurry up to buy meat processing products. ”

What does this mean? Unclear! Where did the "neologism" come from? In literary Russian, there is the colloquial word “yummy”, which conveys a person’s attitude to food. But in the vocabulary of the native language, take at least all the lexical layers, there is no such word - “taste”. It came up with "PR" with a meat factory. And probably got a good fee. The city authorities allowed to hang their "initiative". And a child going to school in the morning past a billboard will naively think that this is how it should be said, as written on a poster - distorting and changing the words of the native language.

That's exactly what they say. Listen to teenagers on the street! "Pancake" (camp designation of obscene curses), "moron", "caps", between them - the mat on the mat. It seems that children have never heard normal Russian words, do not know about their existence.

Here is a schoolboy down Tekstilshikov Street, and on the kiosk at the shopping center, in the form of back letters, it says: “Coolly refreshing.” And the child remembers the phrase, launches it into his daily life, shares with his comrades. It seems that “slang” refers to beer or kvass, but these words are not on the kiosk.

There are hundreds of similar examples.

Across the street I meet another language masterpiece. Largely displayed on the poster: "Cool!". Where, what, why? Maybe put a pointer indicating the way to prison? Or maybe the fishermen were shown the way to the lake? Neither one nor the other. Just hanging "Cool", read and enjoy. Let me remind you, and this, if I may say so, is a word taken from the prison camp jargon.

It is unlikely that the city authorities are trying to run “ahead of all of Russia,” although at one time he also received a caustic description: “Euro-Vologda” for being addicted to everything foreign. This happens, unfortunately, everywhere - from Vladivostok to Kaliningrad. Therefore, there is an involuntary feeling that a “struggle” is going on against the Russian language, and this is quite a tough one.

Its cynicism is manifested in the fact that the original Russian words are replaced by foreign ones on and without a reason; they are written in Latin letters, willfully change spelling and punctuation, they very often violate the verbal control, because of which it becomes unclear what the person wants to say. Many times such treatment with the native language became the subject of indignation of Russian writers, including the recently passed away modern classic Vasily Ivanovich Belov. About his warnings about this I will say below.

Despite the fair complaints of many cultural figures, the replacement of Russian names with foreign words continues. Where will you find today Berezka cafe, Polyushko shop or Ivushka department store? They are not. But from any "maxi", "shopping", "fitness", "bowling", "pizzeria" and other foreign women just dazzled. In Moscow, especially in the evening, you hardly see the names and advertisements in Russian. Yeah! First Altar provides an example! The feeling that I was in a city that has nothing to do with Russia with its 12 centuries-old history. Personally, I continue to love Moscow, although sometimes I want to shout: "Do they know what they are doing?" I think they know, because with some methodical ignorance they trample down the Russian language.

One of the forms of humiliation of the modern Russian language has become the wide use of abbreviated names of organizations, enterprises, offices, firms, to be more precise - the use of abbreviations. What is going on here - do not describe! “WINSNABVOL”, “UMSPPSChRS” ... In one of the names in Vologda I counted 18 (!) Abbreviations. What do you think BCRS means? It turns out that this is the central district library, a budget institution. And what else is in Russia and private district libraries? There are none! Why, then, need this beech? All kinds of "CC", "TSZH", "TsSM", "PF" and other "literature" flooded the facades of houses and office buildings, firmly included in the everyday speech of citizens.

What we, that is, society, got in the end?

Criminal jargon, mixed with foreign borrowing, flavored with all sorts of cuts, gave rise to a monstrous "newspeak", which, to the great tribulation, speaks most of the inhabitants of Russia. Here are talking like decent men, and listen to their conversation, hair stand on end.

-Bablo there chop up? - asked one.

“If the chip goes down, then we'll pull it,” answered the other.

-What did you load, what is all about kei? - pounded the first.

“Our cabbage is not green,” comrade explained.

So understand: Russian people in front of you or aliens?

To such "aliens" should be attributed a significant part of the officials. When you listen to another leader of the region, you are surprised to find that there are no Russian words in his speech. It is filled with “clusters,” “innovations,” “technoparks,” “corporations,” “brands,” “trends,” and so on. Where is the exit? Apparently, we must do so. To declare: "Governor Ivan Ivanovich Kadkin speaks; the speech of the governor is translated into Russian by the professor of philology Nikolai Arbuzov."

Then the questions, as they say, will disappear.

Strange as it may seem, the “language mode” is dictated by those for whom thorough knowledge of the Russian language is a professional duty. Yes Yes! I mean journalists, writers, actors, other specialists from the cultural sphere. There is no point in talking about a low linguistic culture on television - no one will raise it, but they can still lower it. Take a break from business, listen to at least a few broadcasts on the radio “Russia”, “On Russian Radio”, on “Echo of Moscow” - disregard of the Russian language, the use of slang vocabulary literally filled the air of these radio stations.

Somehow at the entrance to the metro in Moscow I bought a newspaper, on the front page there is a catchy headline: “Expensive”. Since when did the adverb and preposition begin to write together? Are the rules of the Russian language already canceled? Similar errors in various publications - the sea. Or are there no proofreaders in the editorial? It is possible and such. But who makes, for example, the staff of the magazine “Russian North” (Vologda) invent phraseological units: “In the middle of 2000-s, the Vologda region covered“ brand fever ”: almost all districts of the region began to think about what to lure tourists to themselves .. . " It is unlikely that employees understand the meaning of their phraseological unit. Let me remind you that the word “brand” (eng.) Originally meant a tag on the neck of a bull in a herd, and fever - an abnormal internal overheating of the body in acute diseases, especially infectious. That is, the idiom does not matter, he is absurd. The desire to come up with such “innovations” and replicate in large numbers, without a doubt, an “infectious disease” requiring urgent treatment. At one of the conferences held in Vologda, they agreed to the point that they began to use the expression “branding of territories”. In both!

Truly, living in modern Russia, you should carry a dictionary of foreign words in your pocket, otherwise you will not understand or get lost. Someone, perhaps, my fears will seem to be in vain: they say, nothing terrible happens, the Russian language will clean itself of foam. Deep delusion! How at one time the formula “the market itself would put everything in its place” was a delusion. He did not set anything up! Therefore, the anxiety for the Russian language, which lived in the soul of Vasily Ivanovich Belov, is close and clear to me. He rightly believed that the state of the language is connected with the level of the general culture, the popular morality in general. The general culture falls - there are sad changes in language. They are also interconnected with the world of the Russian village, which has been intensively destroyed in recent years.

Negative changes in the language are not as harmless as it may seem at first glance. The use of jargon, harsh and abusive words gives rise to many aggressiveness, anger, a tendency to insults. “People are taught to think and feel in a new way, that is, not Christianly and not Russian, but democratically,” said Vasily Belov. “This is hidden cynicism, secret bluffing, it will not lead to any good.”

On the warning of the great writer do not forget.

Day of the Russian language can really become a real holiday for people of different nationalities in Russia. Because the love of language unites and brings together. It should be marked widely, in a big way, and not in a hurry, not on duty. To make this a reality, everyone needs to make an effort.

Ctrl Enter
Noticed oshЫbku Highlight text and press. Ctrl + Enter
We are
About Stalin and KhrushchevThe wrong side of the operation "Argo". What is behind the scenes Oscar-winning film
110 comments
Information
Dear reader, to leave comments on the publication, you must to register.