6 2013 June
22
I think that no one will argue with the fact that the Kalashnikov assault rifle is the most common and massive sample of manual weapons for all history of humanity. Being known as a reliable and reliable weapon, AK has spread all over the globe, and it can be found where, it would seem, such a weapon should not exist at all. Strange as it may seem, the greatest interest in AK can be observed in the United States, despite the fact that the weapon is, like, a likely adversary, either the former, or the future, or the present. Naturally, the army and the police are not going to rearm Kalashnikov assault rifles, but the civilian population pays a lot of attention to this weapon.

Naturally, all this is not from scratch. The most favorable effect of the legislation of the country, allowing civilians to own AK, albeit in the "castrated" version without the possibility of automatic fire. You should not write off the reputation that AK has earned over the entire period of its existence, but it is considered to be by right a reliable, unpretentious and durable sample. Thus, people who have a choice when buying weapons choose the Kalashnikov assault rifle, and the choice of weapons in the USA is really very large. 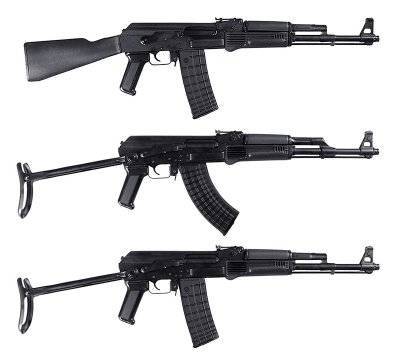 In connection with such a proliferation of AKs, the question may arise as to why the weapon has not been developed and modernized recently, in order to become even better, or rather, it seems like there is a movement, but there is no progress. With such a mass distribution of a Kalashnikov assault rifle, money must flow like a river, and they should be enough to bring the weapon to the ideal in accordance with all modern requirements. Why are there AK development, if all the money from sales and production of AK-like samples were sent to one country, then this would be enough not only for the development of handguns, but also the maintenance of the army, even such as the Russian army. In other words, there is only one question - where is the money? And the money is deposited in other countries from other manufacturers, who, taking advantage of loopholes in legislation, produce their versions of the Kalashnikov assault rifle and do not even think to share the proceeds. And this is not only semi-underground production, but also quite well-known weapon companies.

Those who tried to do something similar to a Kalashnikov assault rifle for very little money and labor costs almost immediately flew out of the weapons market, since a very big competition forces you to do well and save on sensible things. If you select from those manufacturers that make weapons based on a Kalashnikov assault rifle really high, then, oddly enough, these are Bulgarians, namely the company Arsenal, which has established not only AK as a military weapon, but also boasts the widest range models for the civilian market. Especially Bulgarian self-loading devices based on the Kalashnikov assault rifle are valued in the USA, which can be read on almost any forum where they always recommend paying attention to this weapon during the selection of the AK-like civilian model.

Separately, it is worth noting such a remarkable moment, as the fact that Arsenal releases not only classic models, AK, AKM, AK74, but also relatively new devices, as they are called the hundredth series. Weapons are usually produced for 5,56x45 and 7,62x39 cartridges, but at the request of the customer and 5,45x39 is possible, of course, for a separate surcharge. I would like to list all the models of weapons produced by the Bulgarian company Arsenal, but there are really a lot of them, and they differ from each other only by the barrel length, additional seating places and used ammunition, so this is the very rare case when the numbers are superfluous.

Perhaps the only question that remains is whether “IzhMash” gets any money from this production, because the matter does not cost only old models of weapons, and the scale of production is quite large.