"Tank stand with three-plane stabilization of the tower"

According to the old joke, the ballistic trajectory of the projectile allows the cannon to shoot around the corner, for which it must be laid on its side. However, in life such a shot will look different. The projectile will still fly forward and is unlikely to be able to hit the intended target. Even a small inclination of the gun in the direction will significantly change the trajectory of the projectile, and in the case of direct fire, it will require additional complex calculations and amendments in two planes at once. For this reason, the tankers for a long time tried to shoot, being on a flat surface and not allowing the roll of the combat vehicle. Solving the problem of aiming in difficult conditions was suggested in many different ways. However, until a certain time, all these methods remained only suggestions. Approximately at the end of the sixties, German tank builders began the implementation of a new original idea, designed to solve the existing problem with guarantee.


One of the German companies involved in the creation of armored vehicles (unfortunately, there are no direct references to specific authors of the project) put forward a new proposal for equipment and architecture tank. According to the authors of the proposal, the latest two-plane weapons stabilizers did not fully cope with their responsibilities. This equipment corrected the swing of the gun in the horizontal and vertical plane, but did not allow to control its rotation around its own axis. Such stabilization was required for reliable shooting at any longitudinal or transverse tilt of the tank. To form the appearance of such a three-plane stabilizer was not too difficult. But the integration of this system into the classic layout of the tank entailed substantial improvements in the design of both the turret and the chassis.

The project of the new tank was called Erprobungsträger mit 3-achs-stabilisiertem Turm (“Test stand with three-axis stabilization of the tower”). As the basis for a new armored vehicle, they took the chassis of the main tank Leopard 1. During the design work, the German engineers significantly changed a number of the most important chassis assemblies. So, a new 1000 engine of horsepower was installed on it (the Leopard’s own engine gave 830 total), changed the design of the engine compartment, increased the width of the car and modified the front of the hull. However, the middle part of the armored corps, in which the combat compartment was located on the original Leopard 1, underwent the greatest changes. From the former habitable volume, they removed all components and assemblies that could prevent the installation of a new tower of the original design. In addition, there were placed some mechanisms that ensure the mobility of the tower. It was probably a hydraulic system, but there is no exact data on this.

The most interesting part of a promising three-axis stabilization tank is its tower. Its upper part, located above the roof of the armored body, had the characteristic shape of a spherical layer. Below the roof of the hull the outlines of the tower were also round. This was done so that the tower could not only rotate around a vertical axis, but also bend around two horizontal: transverse and longitudinal. With the help of such a system, horizontal guidance was planned to be carried out by turning the entire tower, and the vertical one - by its inclination. The third axis of rotation was required to compensate for the rolls of the tank itself. Thus, regardless of the position of the tank in space (of course, at reasonable angles of the longitudinal and lateral inclination of the machine), the gun was always kept in the same position required for the shot. 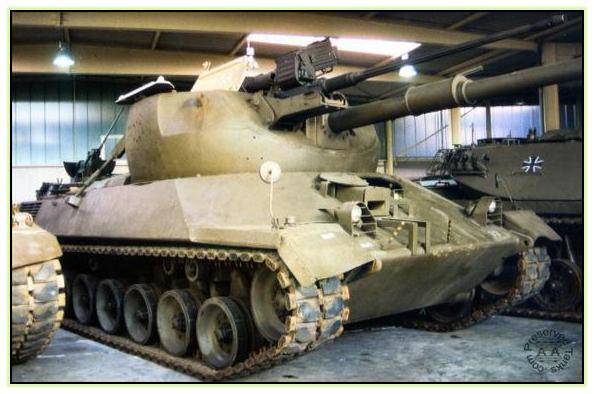 The stabilizer itself was made on the basis of the available models and had a gyroscope and a set of sensors with equipment for generating commands for the tower drives. The new stabilizer differed from the old two-plane stabilizers by the presence of additional sensors and another system of rotation and tilt of the tower.

Turned and tilted in all directions, the tower simplified the installation system of the gun. Presumably 105-mm rifled gun L7 mounted on recoil devices and stiffer suspension. The dimensions of the turret and the breech part of the gun, as well as the volume required to accommodate the crew, did not allow a large number of shells to be placed in the turret. A feeding niche with styling also could not solve the problem, since it significantly reduced the tool pointing angles. For this reason, as they say, with a reserve for the future, next to the main tool, they provided for a twin 30-mm automatic cannon. Due to the lack of space inside the turret, the cannon and the ammunition box were placed on a special bracket on the front sheet of the turret.

It is known about the construction of at least one prototype of the tank Erprobungsträger mit 3-achs-stabilisiertem Turm and its further testing. According to reports, driving performance remained at the level of the base Leopard 1. Regarding the fire capabilities of the machine with a three-plane stabilization, there is no accurate information. Most likely, the new weapon stabilization system could prove its advantages over the existing ones. However, even without official information, it can be assumed that stabilization in the third plane in most situations turned out to be superfluous, since not always the experienced tank had to fire from such difficult positions.

The result of the Erprobungsträger mit 3-achs-stabilisiertem Turm project was the collection of a large amount of information about the applied technical solution and the closure of all works. The advantages of the original stabilization system could not outweigh its inherent disadvantages. A whirlwind tower with a rigidly mounted gun was too difficult to manufacture and of little use for real use. The limited volume of the fighting compartment simply did not allow to place sufficient ammunition or another larger-caliber gun. An alternative to the swinging turret could be a special system for suspending the instrument, swinging in a vertical plane and turning the gun around its axis. However, this method of three-plane stabilization was not used on any experimental armored vehicle.

The only component of the original three-plane stabilizer that has been used in the future is the sensor system with the ability to measure the roll of the tank. As for the actual stabilization of the cannon in the third plane, on the new German tank Leopard 2, as well as on other similar machines of recent times, the tasks of roll compensation are assigned to a special algorithm for the operation of the fire control system. The body tilt sensors collect information about the position of the combat vehicle and transmit it to the computer. He forms the necessary amendments and gives the appropriate commands to the executive mechanisms of the weapons stabilizer, which turn the weapon in two planes. Thus, the original idea with a full-fledged three-plane stabilizer could not find a place in the equipment of modern tanks, but it helped solve the old problem with shooting accuracy.

Ctrl Enter
Noticed oshЫbku Highlight text and press. Ctrl + Enter
We are
Experimental tank with three-plane stabilization of the tower Erprobungsträger mit 3-achs-stabilisiertem Turm (Germany)Is the "old" well forgotten to become the "new"? Part-2. At the call of honor and duty
18 comments
Information
Dear reader, to leave comments on the publication, you must to register.