6 2013 June
64
Belarus does not often please the public with new weapons and military equipment, so each appearance of a new sample causes a corresponding reaction. In the middle of May-month, journalists from the BelaPAN agency managed to take a few photos of the new armored car built on one of the Belarusian enterprises. An unmarked car and state numbers car moved along one of the highways, accompanied by a car with special signals. This small "tuple" was on the highway at a speed of about 100 kilometers per hour in the direction from Minsk. The BelaPAN correspondent managed to make only a few good shots of the new armored car before it retired and turned off to another route. 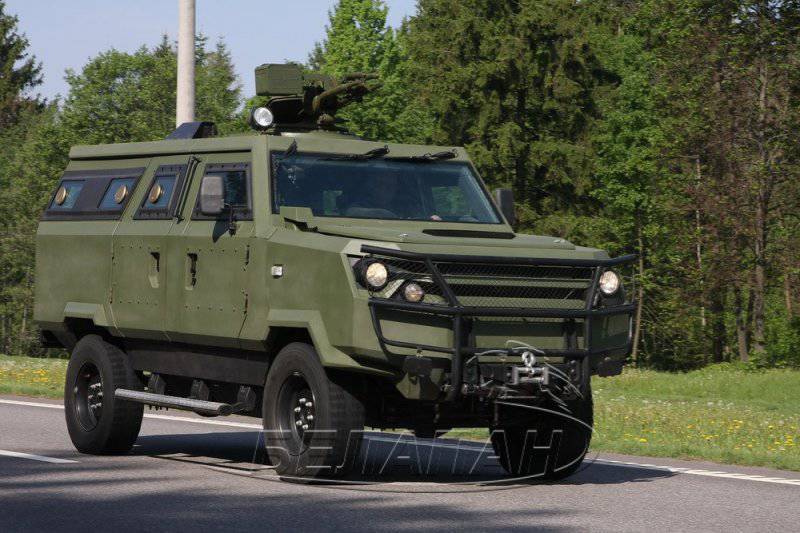 According to the information company BelaPAN, which published photographic materials, the mysterious unmarked armored car is a new development of the Belarusian defense industry. This is an armored car "Leopard", passing tests and preparing for adoption for service. Other details about the car are not yet available and therefore it is possible to form an opinion about it only from a few photos. Nevertheless, the available materials make it possible to draw certain conclusions and roughly estimate the potential of such an armored car.

Externally, the car "Bars" resembles some equipment of a similar purpose, created in third countries. This can be explained by the similarity of the requirements for the machine and a unified approach to their implementation. Thus, a characteristic feature of all cars like the “Leopard” can be calculated as a large ground clearance, with the help of which the patency increases to some extent. Like other armored cars of this class, the new Belarusian design has an all-wheel drive undercarriage, which is clearly seen in some photos. The type of chassis, engine and transmission used has not yet been clarified. A variety of versions are put forward: from the use of a certain in-house development to the purchase of a suitable foreign chassis. 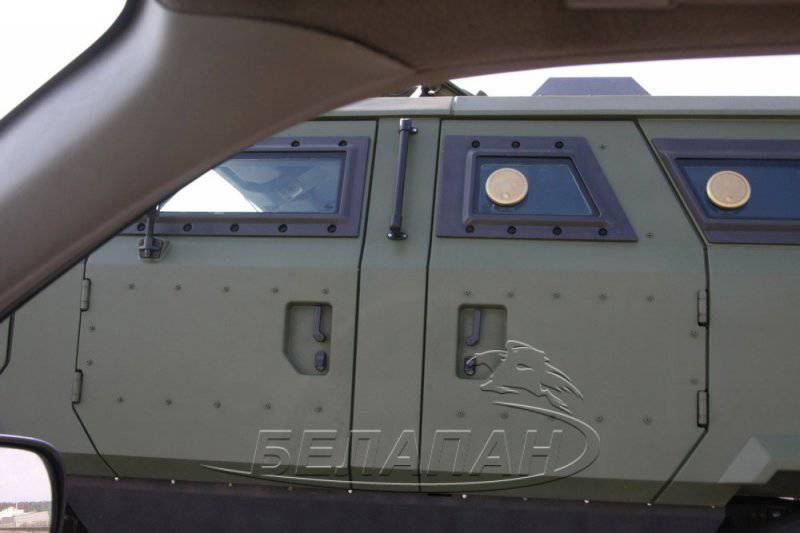 The combat weight of the Bars vehicle, judging by its size, is in the range of five to seven or eight tons. In this case, the car should be equipped with an engine power of at least 200 horsepower. For comparison, the Italian Iveco LMV armored car, weighing tons in 6,5, can be accelerated on the highway to 185-120 km / h using the 130-strong engine. The Belarusian "Bars", allegedly, was walking along the road at a speed of about 100 km / h, from which it is possible to draw appropriate conclusions about the engine and driving characteristics in general.

Protection characteristics were also not disclosed. On the existing photos you can see only that the Leopard car has an armored case assembled from rectilinear panels and laminated glass. It remains only to speculate about the level of protection of the materials used. Most likely, the most robust booking details can withstand the hit of standard non-armor-piercing bullets of the 7,62x54R rifle cartridge. Armor-piercing ammunition of this caliber, as well as large-caliber bullets, armor probably will not stop. Another mystery of the new armored car is mine protection. At the present time, due to the nature of the wars of recent years, such measures are emphasized. Perhaps, "Bars" is equipped with a special armored bottom V-shaped. However, in the existing photographs there are no such details that directly indicate the presence or absence of such a protection system. Therefore, the issue of mine protection also remains open. 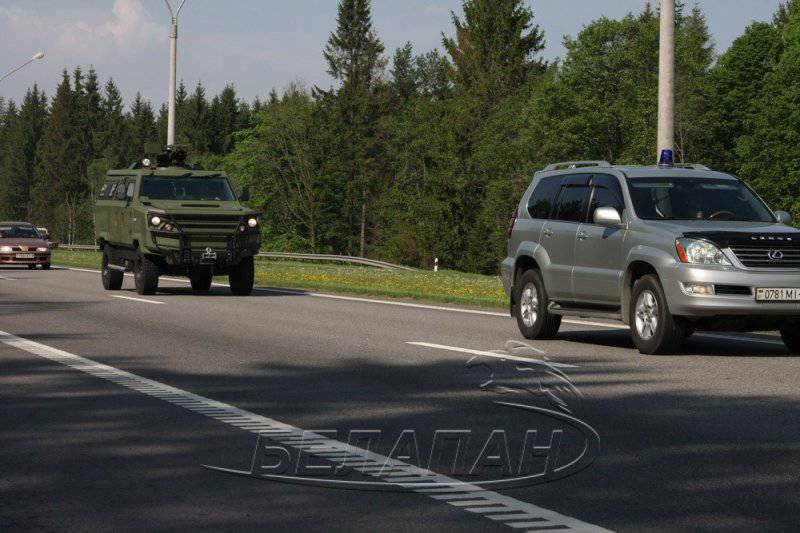 Barça’s own weapons may obviously consist of a machine gun or an automatic grenade launcher. Necessary weapon mounted on an open turret above the sunroof. There was no armament on the armored car on the route, but a machine with a box for ammunition was installed on the hatch. To fire, without leaving the reserved volume, the Barça crew can use the loopholes. Such units are installed on all glasses of the car except the front and front side windows. In total, the armored car has eight loopholes closing from the inside: three on the sides and two in the rear.

The location of the bulletproof glass and devices for firing personal weapons, as well as the back door do not allow to draw accurate conclusions about the layout of the troop compartment. Judging by the loopholes, the landing places of the soldiers on the Barça are located in the same way as on Soviet and Russian armored personnel carriers and the men sit facing the sides of the car. However, the design of the rear door says the placement of seats at the sides. Landing on the two front seats is made through the front side doors, to the landing compartment - through two side and one rear door. The dimensions of the armored car allow us to talk about the transportation of up to seven or nine soldiers, not counting the driver.

Finally, it is worth noting the presence of large and probably quite comfortable footrests under the doors, two winches in the front and rear of the machine, as well as a "kenguryatnik" in front of the grille, equipped with a grid. 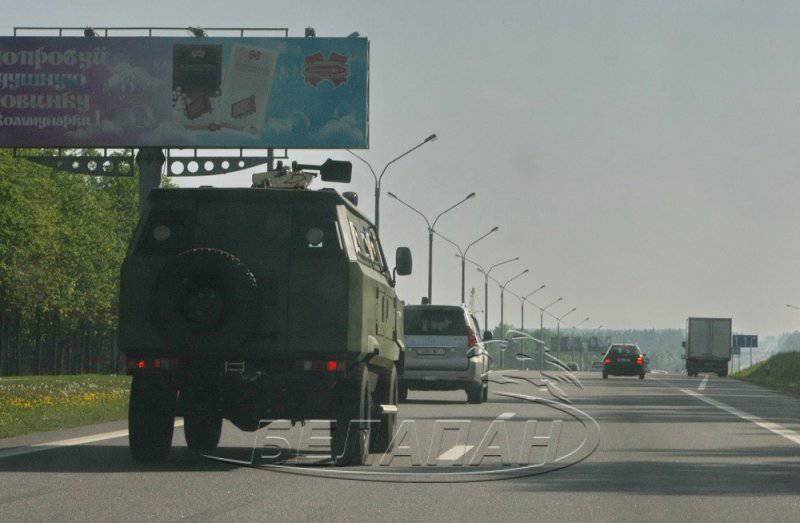 It is noteworthy that this is not the first appearance of Barça in public. Previous photographs with this armored car appeared in 2011 year, when he had the opportunity to participate in a parade in Turkmenistan. The armored car sold to the Central Asian country differed from the recently noticed Belarusian prototype only in a few external details. Perhaps the actual differences are greater, but the appearance of both cars differs slightly. The most notable difference in the Turkmen armored car was the presence of weapons. On the open turret was installed machine gun NSV-12,7 "Rock". In addition, the turret was equipped with a flap consisting of two halves. After the parade, there was no information about the Turkmen Bars.

Once again, "Bars" appeared on the pages of the Belarusian magazine "Special Forces" (December issue for 2012 year). There, a car similar to that seen in mid-May was used as an example of the technology of group A of the KGB of Belarus. The armored car, against the background of which the Special Forces soldiers were photographed, had the same kenguryatnik grid as the car from the highway, and was also equipped with covers of a characteristic beige color. Weapons and turret were missing.

Thus, even if there is a shortage of information, it is possible to speak with confidence about the existence of at least two samples of the Bars armored car and the start of export deliveries. The development of such a project is not surprising. Several years ago, Belarus has already demonstrated its armored vehicle "Ocelot" of a similar purpose. In addition, on the basis of this armored car was created self-propelled anti-tank missile system "Caracal", which can be equipped with the necessary type of missiles. In light of this, the appearance of the new Leopard armored car looks logical and expected. Belarus sees the need for light armored vehicles and is trying to close this niche on its own or with the help of international cooperation.