"For Faith, Tsar and Fatherland": to the history of the famous military motto 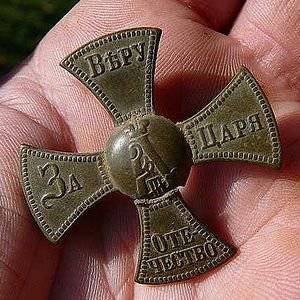 The pre-revolutionary military motto “For Faith, Tsar and Fatherland!”, Although it finally took shape in the 19th century, has a glorious background. In pre-Petrine times, warriors went into battle for the “land of Ruska” (Lay of Igor), “for the land for Ruska and for the Christian faith” (Zadonshchina), “for the House of the Most Holy Theotokos and the Orthodox Christian faith” (sentence of the First Militia 1611 g . [1]), for “state honor” (sentence of the Zemsky Sobor of 1653, [2]). Thus, by the 18th century, all three components of the future motto became an integral part of Russian self-consciousness — all that was needed was to unite them into one capacious formula.


The word "Fatherland", of course, was also known in Ancient Rus, but it had various meanings. It was understood not only as “homeland” (“the prophecy of the lack of chastity, as it is in the quality of its own (Matt. 13: 57)), but also“ paternity ”(one of the iconographic images of the New Testament Trinity, including the image of God Savaof as an old man, "Fatherland"). However, since the time of Peter the Great, the concept of "Fatherland" has acquired an important ideological sound. The order of Peter, voiced by the troops before the battle of Poltava, was known, which said: “Warriors! Here came the hour that should decide the fate of the Fatherland. And so you should not think that you are fighting for Peter, but for the State, handed to Peter, for your kind, for the Fatherland, for our Orthodox faith and the Church ”[3]. Peter's famous toast is also known: “Hello, he who loves God, me and the fatherland!” [4]. The first orders established in Russia, as stated by their slogans, were awarded “For Faith and Loyalty” (Order of St. Ap. Andrew the First-Called, established in 1699), “For Love and Fatherland” (Order of St. Catherine, Catherine, 1714 g .), "For the Works and Fatherland" (Order of the Holy Blvd. Alexander Nevsky, 1725).

In 1797, Emperor Paul I, who fought against free-thought freestyle, ordered the removal of the word “Fatherland” from use (together with the words “citizen”, “society”, etc.) and replaced with the word “State”. However, this ban did not last long - the new emperor Alexander I in 1801 canceled it. And on the medal, which was awarded to the 1806-1807 militia, again it appeared: “For Faith and Fatherland”. However, at this time the concept of “Patronymic” was filled with new content: if earlier it, like Peter, was more associated with “his family”, now with new romantic tendencies its value increased - now it rather meant involvement in a unique national culture. In 1811 year S.N. Glinka, in his journal Russky Vestnik, formulated the patriotic ideal in the following way: “God, Faith, Fatherland” [10]. As historians rightly point out, he contrasted the slogan of the French Revolution “Freedom. Equality. Brotherhood ”[11].

It is also worth noting the almost demonstrative absence in the Glinka formula of the mention of the monarch. The relations of Alexander I with the “Russian party” at that time were not simple: the emperor was suspected of seeking to limit his own autocracy, which was perceived with complete rejection. The Tsar was constantly reminded that his autocratic power does not extend only to one thing: he cannot restrict it - God and the people who handed him the power will not be allowed to do this. N.M. Karamzin, in his Note on Ancient and New Russia (1811), wrote about the beginning of the Romanov dynasty: “The disasters of the rebellious aristocracy enlightened the citizens and the aristocrats themselves; those and others unanimously, unanimously called Michael an autocrat, an unlimited monarch; those and others, inflamed with love for the fatherland, cried only: God and Sovereign! .. ”. Having subjected Alexander I's policy to harsh criticism, Karamzin ended his words as follows: “Loving the Fatherland, loving the monarch, I spoke sincerely. I am returning to the silence of a loyal subject with a pure heart, praying the Almighty, may the Tsar and the Russian Kingdom be observed! ”[12]. Thus, it was the nationwide faith and love for the patronymic that became the guarantors of the preservation of the Kingdom.

The beginning of World War 1812, not only caused a patriotic upsurge, but also rallied society around the government. On the eve of the war, a prominent representative of the “Russian party”, Admiral A.S. Shishkov. In his Discourse on Love for the Fatherland, he wrote about the heroes of the Time of Troubles: "Each of these Christ-loving warriors, crossing himself, became the place of his comrade killed beside him, and all in a row, crowned with blood, not taking a step back conquered How? This is a firm chest, rushing for the Church, for the Tsar, for the Fatherland on a sharp iron; This blood flowed from the wounds of generously poured life; is this great feeling in man born without hope of immortality? Who will believe this? ”[13]. It was Shishkov who was the author of the imperial manifestos and appeals issued during the war, which enjoyed wide popular love. Later A.S. Pushkin wrote about Shishkov: "This old man is dear to us: he shines among the people, // Sacred memory of the twelfth year." In an appeal to Moscow to convene the militia from 6 July 1812, it was said: “For the sake of having the intention, for reliable defense, to gather new internal forces, we first turn to the ancient capital of Our ancestors, Moscow. She was always the head of other Russian cities; she always poured forth the power of her lethal force from her bosom; following her example, from all the other environs flowed to her, like blood to the heart, the sons of the Fatherland, to protect it. I never insisted on that great need, as now. The salvation of the Faith, the Throne, the Kingdom require it. ”[14]. The 1812 militia cap badge of the year (as it was later in 1854-1856) was a cross with the inscription: "For the Faith and the Tsar". Finally, in the “Announcement for reading in churches” written by Shishkov in November 1812 of the year, it was said: “You fulfilled your duty worthily by defending Faith, the Tsar and the Fatherland” [15]. So, the motto was born - and he was born from the fire of the Twelfth year. The effect such words had could be judged at least by the fact that the Prussian militia 1813 of the year (Landwehr), who spoke out against Napoleon in alliance with the Russians, also received a Russian-style cockade - in the form of a brass cross with the motto “Mit Gott für König und Vaterland "(" With God for the king and fatherland ").

Later Shishkov repeatedly mentioned all three concepts together. In the manifesto of 18 of May 1814 of the year, published in conquered Paris, a nationwide feat was again noted: “A meek villager, unfamiliar to the present with the sound weapons, arms defended Faith, Fatherland and Sovereign ”[16]. The principles of the Minister of National Education S.S. Uvarov in 1832-1833 proposed to establish a Russian education: “Orthodoxy. Autocracy. Nationality "[17]. Later in the manifesto of Emperor Nicholas I, published 14 March 1848, in connection with the new revolution in France, it was said: “We are certified that every Russian, every faithful of Ours will respond joyfully to the call of his Sovereign; that our ancient exclamation: for Faith, Tsar and Fatherland, and now will foretell us the path to victory: and then, in feelings of reverent gratitude, as now in the feelings of a saintly hope for him, we all exclaim: God is with us! understand the pagans and submit: like God is with us! ” A memorial sign in the form of a cross with the inscription "For Faith, Tsar, Fatherland" was granted to the militia members of the Crimean War after the conclusion of the Paris Peace 1856 of the year. Since that time, the dictum has acquired its unchanged laconic appearance, which persisted until the 1917 year. Perhaps still it remains the best example of the Russian military motto.