Angara launch vehicle: getting closer to the stars

6 2013 June
53
The construction of a technical complex for launching Angara launch vehicles is entering its final stage. The launch of a new generation of rockets is guaranteed to take place before the end of 2014. The Angara launch vehicle with new environmentally friendly engines will eventually be able to replace most of the currently existing types of missiles designed in the USSR. The rocket’s first launch is scheduled for May 2014. It is assumed that the Angara missile system will replace such Soviet developments as the Cyclone 2 / 3, Proton, Cosmos-3M. The idea of ​​the new Russian rocket is based on the universal rocket module (URM), which is capable of flying both independently and as part of the carriers of the heavy and middle class.


At a meeting with Prime Minister Dmitry Medvedev, which took place in late May, Russian Deputy Prime Minister Dmitry Rogozin said that the launch of the Angara rocket from the Plesetsk cosmodrome was to be held in May 2014. And already in 2015, the Angara light rocket should be launched from the newest Russian Vostochny cosmodrome, which is being built in the Amur region near the village of Uglegorsk. The Vice Prime Minister noted that it is important that these launches will be carried out by power plants that use oxygen and kerosene as fuel, and not heptyl, which does not hold water from the point of view of ecology.

According to Dmitry Rogozin, who oversees the development of the Russian defense industry, the schedules of preparation for the launches of both light and heavy Angara missiles from the Plesetsk cosmodrome are strictly controlled, so he is confident in meeting the launch dates. After the delivery of the rocket to the Plesetsk cosmodrome, tests of the complex and its refinement will begin here, in order to prepare the launch of the light rocket in time. According to Rogozin, the first Angara light launch vehicle will be sent into space on the night of May 28 2014. 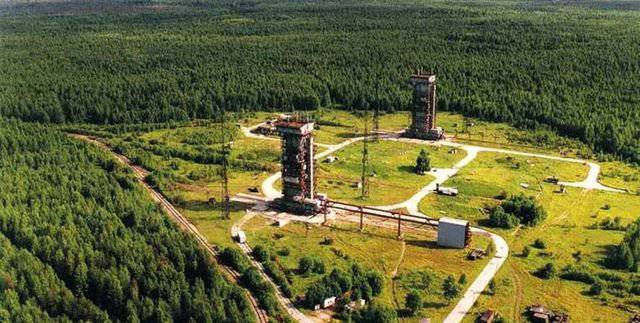 Spaceport Plesetsk
The Angara is a modern family of launch vehicles built according to a modular principle and equipped with oxygen-kerosene engines. This family will include 4-class rocket (from light to heavy): in the load range from 1,5 tons (Angara 1.1 rocket) to 35 tons (Angara A7 rocket) in low-Earth orbit when launching from the cosmodrome "Plesetsk". The head developer of the Angara family of rockets and the carrier rocket manufacturer is the State Space Research and Production Center named after A.G. Khrunichev. (GKNPTs them. M.V. Khrunichev).

The operational and energy characteristics of the Angara carrier rockets are at a level that makes it possible to compete quite successfully in the international market with the best examples of rocket and space technology. The widespread use of unification in this project, together with the use of the most advanced production technologies, will allow Angara to provide a lower (compared to world analogues) cost of launching the payload into space in a fairly wide range of orbits. The Angara launch vehicle is produced with a very large use of polymer composite materials, so the share of composites in this rocket is 20% higher than in Proton-M. At the same time, it was possible to increase the properties of the materials used almost 2 times. The first place to launch Angara missiles in Russia will be the Plesetsk cosmodrome. The unique technical solutions implemented in this family of missiles allow launching all types of Angara missiles from one launcher.

In practice, various variants of Angara launch vehicles are implemented using different numbers of universal rocket modules (URM-1 for the first stage of rockets and URM-2 for the second and third stages). For light missiles (“Angara 1.1” and “Angara 1.2”) - one URM, for middle-class launch vehicles - 3 URM (“Angara A3”), for heavy launch vehicles - 5 URM (“Angara A5”) . The length of the universal rocket module is 25,1 meters, diameter - 2,9 meters, weight with a filled fuel - 149 tons. All URM equipped with oxygen-kerosene engines RD-191. In the role of upper stages on lightweight rockets, such as the Angar 1.2, the Briz-KM upper stage is used, which underwent flight tests as part of the Rokot conversion medium, while the Angar A5 heavy rocket is planned to use the upper stage Breeze -M "and KVTK. 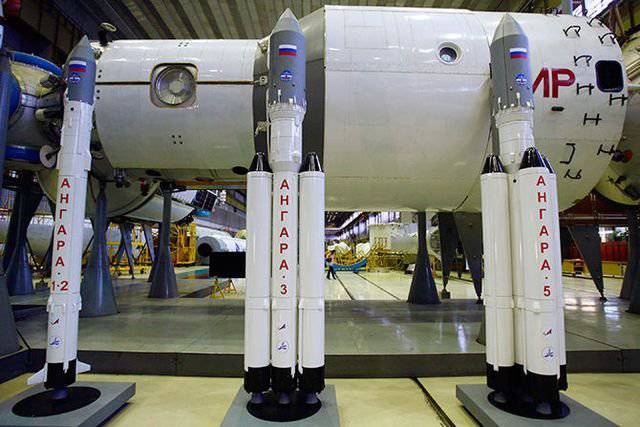 The total mass of the Angara 1.2 light missile is of the order of 170 tons. At the same time, as part of heavy complexes (“Angara A7”), the number of URM will reach 7, and the starting weight will exceed 1100 tons. Such impressive units are joined to each other and assembled as a very large constructor. Currently, missile tests are conducted on special mock-ups. “With the created technological mock-ups, it is possible to carry out the whole range of pneumatic tests: with a rocket and some electrical tests. In this complex, all launch vehicles of this family will be prepared: from light to heavy, ”said German Malakhov, who is the head of the autonomous and complex testing laboratory of the Russian Plesetsk cosmodrome.

Each universal rocket module is equipped with an RD-191 oxygen-kerosene engine. This engine is an environmentally friendly option, unlike other types of engines that are used on heavy launch vehicles and use highly toxic heptyl as fuel. The light class Angara rocket will be able to put into the near-earth orbit more than 1,5 tons of payloads, an indicator of the Angara heavy rocket is 35 tons. This is more than that of the Proton carrier rockets, which are sent into space from the Baikonur cosmodrome, located in Kazakhstan.

At the same time, the launch of the Angara missile was postponed more than once, but now the work on this program is under the personal control of the top military leadership of Russia. Russian Deputy Minister of Defense Yury Borisov noted that it was decided to take the work on this project under manual control, under the personal control of the Minister of Defense of the Russian Federation. At present, a cut-off schedule has already been drawn up. This schedule is rather seriously monitored, every day the commander of the Aerospace Defense forces receives progress reports, once every 2 week reports are received by Yuri Borisov himself, and once a month he reports on the progress of work personally to Defense Minister Sergei Shoigu. 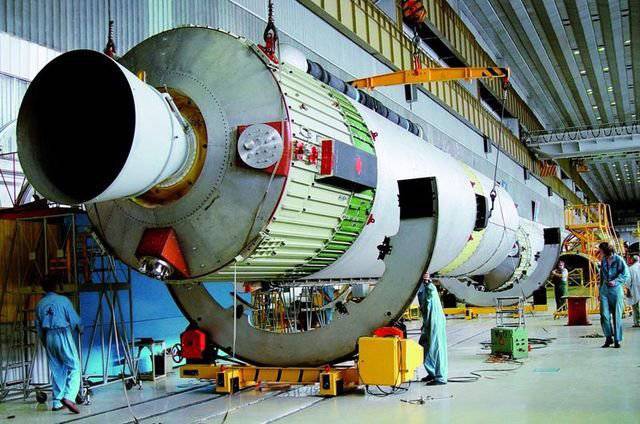 It is possible that in the future the Angara rocket will be certified for manned flights. It is for this family of rockets at the Plesetsk cosmodrome that a launch pad is being prepared today. Work on it began a few decades ago, originally it was intended for Zenit launch vehicles of Ukrainian origin. However, in recent years, the launch pad has been modified. Currently, designers and engineers will test the launch compatibility directly with the rocket itself. The site will be used to launch all Angara type rockets, regardless of the number of modules used. If everything goes according to plans, next year the launch of all military spacecraft can be transferred from Baikonur to the Plesetsk cosmodrome, the main thing is that the launch vehicle should meet the expectations of its creators and customers.

The development of the newest space complex "Angara" was not accidentally declared a task of state importance and taken under close control by senior government officials. The launch of the Angara carrier rockets will allow the Russian Federation to launch into space apparatus of all types from its own territory, which will provide Russia with guaranteed and independent access to space.