An elder in the garden, a summit in the Urals, or Something about the Russia-EU summit

6 2013 June
137
The next duty Russia-EU summit ended a few days ago. This time Yekaterinburg was chosen as the venue for it, namely, the venue - this, it seems, very little that similar summits of recent years distinguish from each other. You can not even be a special specialist in the field of geopolitics to predict what issues are raised at such a summit. The fact is that these issues manifest themselves year after year. To paraphrase one well-known expression in relation to the role of the summit, we can say something like this: wake me up through the end of fifteen years, and I will say that the Russia-EU summit discusses the topics of gay, energy and the abolition of the visa regime ... 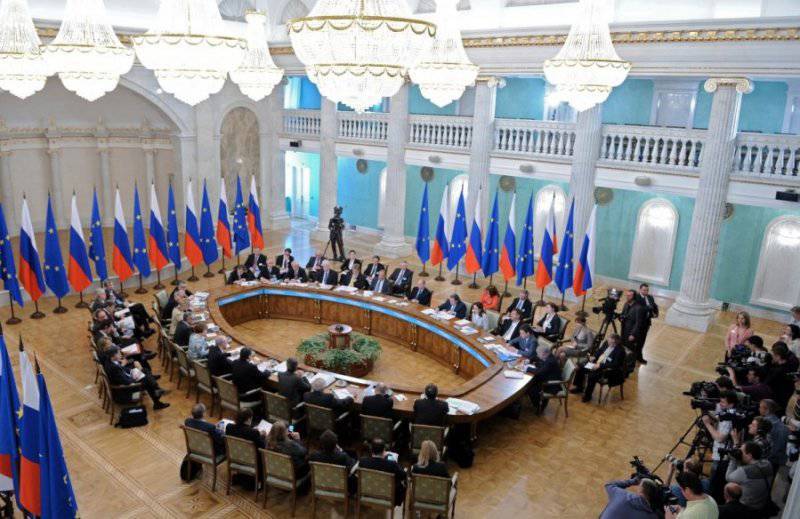 So, in Yekaterinburg, within the framework of the 31-th Russia-EU summit, in which the main actors besides Russian President Vladimir Putin were Mr. Van Rompuy (head of the European Council) and Mr. Barroso (head of the European Commission), the questions were not new. Rompuy and Barroso brought with them to the Urals a very large delegation, among whose members our old acquaintances were lighted up. Old acquaintances here include the European "favorite" of our readers, Baroness Catherine Ashton, who holds the high post of EU High Representative for Security and Foreign Policy. The extent to which the readers of the Military Review have become attached to it can be understood by rereading the materials in which the name of the baroness is mentioned. In terms of "joy" from the appearance of her name on the pages of our publication, Mrs. Ashton can be compared only to Hillary Clinton, but she already counts the state secretary’s pension, and the baroness is still on horseback ...

What topics were in the circle most actively discussed during the summit? Well, as mentioned above, such topics included the topic of abolishing the visa regime between the Russian Federation and the European Union. It would seem that the topic is serious and promising big final preferences for both Russia and the European Union: from increasing the flow of tourists in both directions to increasing trade between the countries. A serious topic is a serious discussion at the summit. True, the subtext of this discussion is approximately as follows: conversations talk, and the European Union is ready to go on all heartburns with one sole purpose - to delay the signing of such an important document for an indefinite period. For thousands of pseudo-Islamic radicals and extremists of other stripes, the path to an old Europe is open, but for some reason, the possibility of free visits to Europe by ordinary Russian citizens from Europeans is rejection. Oligarchs and emissaries of the Caucasian radicals - you are welcome, but for the rest of the Russians - you understand, fears ...

But, in fairness, I must say that there are countries in the EU that understand the full benefits of abolishing the visa regime with Russia, and if they were not in the EU itself, then the abolition of visas would have happened long ago (at least, the heads of these countries). We are talking about Germany and Poland. Most of the other EU countries openly pull rubber in this matter. Drawn in a historical perspective.

September 2002 years. In Brussels, on the initiative of the Russian side, they decide to consider the possibility of abolishing the visa regime.

July 2003. EU representatives say that by the year 2008, the visa system between the European Union and Russia can be, if not completely eliminated, then many times simplified.

2006 year. Summit in Sochi. Members of the European delegation say that there are all prerequisites for abolishing the visa regime, and this cancellation may occur in the coming 5-6 years.

November 2009 year. Summit in Stockholm. The Chairman of the European Commission states that in order to overcome the economic crisis, it is necessary to find ways of rapprochement with Russia, and one of these ways is the possibility of canceling the visa regime between the Russian Federation and the EU.

2010 year. Nicolas Sarkozy (the then President of France) suggests that in 10-15 years, Russia and the EU will turn into a single economic space without creating visas.

2012 year. Representatives of the German business community urge Chancellor Angela Merkel to speed up the process of abolishing the visa regime with Russia. Merkel willingly nodded her head ...

June 2013. Yekaterinburg. Another discussion on the abolition of visas, which is buried in a new wall, quickly erected by European delegates. As a wall, the demand of Europeans for reducing the number of biometric service passports to 15 thousand units appeared. The Russian side was surprised by this nuance, which has turned from a purely technical to a basic and irresistible. At the same time, the representatives of the delegation themselves refused to comply with the Russian ordinary request for the provision of data on air passengers who fly from the EU to Russia or transit through the territory of the Russian Federation. Why data of European passengers cannot be presented to Moscow - the big question?

It is obvious that even if the Russian side fulfilled a new European condition and abandoned its own, then our European “friends” would find other ways to pull diplomatic rubber, as they say, by digging out dirt from under their nails. And after that we still say that Russia is a country of not frightened bureaucrats. Yes, our homebrew bureaucrats to the terry bureaucrats of the European bottling is still very far away.

In general, the topic of visas was voiced again and again its real productive discussion was pushed into the background. Indeed, if you cancel the visas now, then Van Rompuy and Barroso will have nothing to discuss at the next summit. And so - Temko in store. Temko is already pretty historical raid.

Although today there is another topic that moves from the summit to the summit, from President Putin’s trip to the trip, from one interview to another. The topic is “infringement” of the rights and freedoms of NGOs and the LGBT community in Russia.

One gets the impression that the former Europeans, once completely normal and civilized, somehow picked up a strange affliction. Ailment is a strong desire to translate the conversation about solving any economic and political problems into the plane of the problems of sexual minorities. Like, what's the technical default of Greece, what kind of extremists there are in Paris and London, what's the decline in real incomes, what kind of visas - the main thing is that gays should have everything “okay”. Gay people like God forgive the hopes and pillars of modern European civilization ...

Well, in fact - their gays are completely crazy! And if NPOs in Russia are added to this topic, it turns out to be a broken record, to listen to which there are no enough forces. Not enough of them, it seems, and Vladimir Putin, who was once again asked about the situation of sex minorities in Russia. The President of Russia this time could not cope with emotions, and here he can be understood.

Got me with these same-sex marriages! I went to Europe - they wave the flags there, I came here - again you are pestering me. I believe that our legislation is very liberal in this respect and there is no discrimination. Generally no! We have people of any preferences working, making a career, I believe that there are no problems. In fact, we should all be more tolerant and show less aggression. As for the draft law on restricting the adoption of Russian children by persons in same-sex families, I still do not have such a draft law. If this will be adopted by parliament, I will sign it.

And he will do right if he signs. In fact, hysteria about the gay community and the adoption of same-sex couples of children, to be honest, is not worth a penny. It seems that in Russia children are going to be adopted exclusively by LGBT people. Well, there is simply no one to adopt more orphans, besides a gay couple from somewhere in Kapotni or Altufyevo ... God knows what they are, and now they are replicating the same type and frankly teeth. Like, look at how we have besieged Putin. Well, just the same version of the Shukshin "cut off!" And only ...

“Cut!” Was also in a question from a Spanish journalist to Putin about the connection of Turkish protests with the “persecutions” of non-governmental organizations in Russia. And such a “Cut!”, That even the questioner herself, obviously, hardly understood what nonsense she asked. Putin, in his characteristic manner, answered this absurd question:

Well, you also compared! Apples and uncle in Kiev! What does the NPO have to do with it, do they really close them? Have you read the law at least? It says nothing about the closure of these organizations, but even about the application of sanctions against them! We are talking only about the disclosure of information. But nobody closes them. What does the Arab spring? These are completely different things.

Yes, of course, she did not read any law. Just a question about the law is a trend: everyone asks, and she wanted to, because gays and NGOs are valid questions for any universal democracy and megaliberalism striving for victory in every single country journalist.

Discussed at the summit and the Syrian problem. Well, again - as discussed ... The topic was touched upon, each expressed his vision of solutions, and remained in their positions. Europeans - to Putin about C-300, Putin - to Europeans about the Syrian opposition, which has a gastronomic tendency to eat the internal organs of dead soldiers ... The conversation, as you can see, was not productive.

And if we proceed to assessing the outcome of the summit, it turns out that there are no results at all. Unless our European guests rations eaten tight, they pinched jet fuel and with fasting faces set off as quickly as possible from the “wild” Russia to their patrimony, where the megademocracy joyfully met them with bare backs. And may Syria, visas, energy security, the problem of drug trafficking, extremism and the fall of the moral image of the Old World wait. The European Commissioners are not up to them now ...

Ctrl Enter
Noticed oshЫbku Highlight text and press. Ctrl + Enter
We are
Results of the week. “Excuse me, aren't you crazy?” - “No. I have a certificate "Results of the week. "Of course, he is guilty, but he ... is not guilty ..."
137 comments
Information
Dear reader, to leave comments on the publication, you must to register.