Something North Atlantic is happening in South America 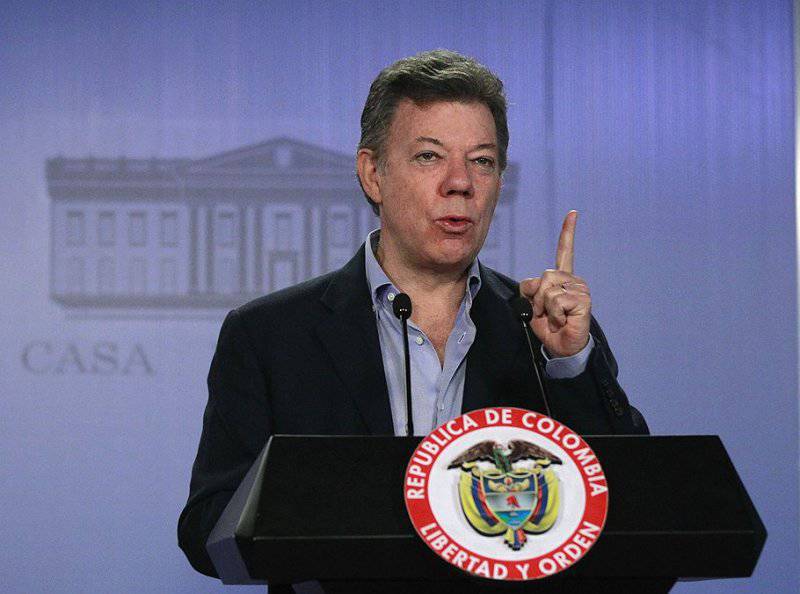 The left-wing leaders of Latin America painfully perceived Colombia’s plans to begin a rapprochement with NATO, the final goal of which the country's president, Juan Manuel Santos, called joining the alliance. In Washington, on the other hand, they declared support for Bogota "as an influential member of many international organizations, to which NATO could well belong." However, the alliance explains: to begin with, at least theoretical talk about the expansion of NATO beyond Europe and North America, it is necessary to change the basic document - the North Atlantic Treaty of 1949.


The scandal erupted after the end of last week, Colombian President Juan Manuel Santos announced: in June, the country's Defense Ministry and NATO sign an agreement on the exchange of secret information, which will allow "to begin the process of rapprochement and cooperation with a further goal to join Colombia in the alliance." “We have the right to think on a larger scale and the reasons to be the best is not only in the region, but in the whole world,” the president added.

Bogota’s plans have found support from a key member of NATO, the United States. According to the Assistant Secretary of State for Western Hemispheres, Robert Jacobson, President Santos’s statement is "a deep reflection of Colombia’s increased capabilities and willingness to act at the global level as an ally." According to Ms. Jacobson, Washington supports Bogota as "an active and influential member of many international organizations, which could well include NATO."

Colombian neighbors in Latin America reacted very negatively to its NATO ambitions. Nicaraguan President Daniel Ortega called the decision of Bogota "a dagger strike in the heart of the peoples of the continent." And he added: NATO is known only by the fact that "it is bombing, killing, destroying," while the countries of Latin America are striving for peace. “The actions of Colombia are aggression, provocation, conspiracy against anti-imperialist governments,” the Bolivian leader Evo Morales is convinced, calling for an emergency meeting of the Security Council of the Union of South American Nations (UNASUR) to be convened. And Venezuelan President Nicolas Maduro was the least diplomatic, saying: "In this world, fools are not respected, kowtowing to empires." Earlier, Mr. Maduro claimed that the Colombian authorities planned to poison him, kill the head of the National Assembly Diosdado Cabello and "attack the Venezuelan military."

However, NATO believes that the Latin American left has nothing to worry about. As the source explained in Kommersant, the talk about potential Colombian membership is meaningless, since the 10 article of the North Atlantic Treaty, signed in Washington in 1949, says: "any European state that can contribute to security can join NATO region ". "If the countries of South America began to join NATO, it would be a completely different organization," the Kommersant source said, adding: "The challenges facing the alliance are global, so we are developing cooperation with other regions in every way."

Taking into account the reaction of Brussels and its neighbors, the Colombian authorities tried to clarify the words of President Santos. As Defense Minister Juan Carlos Pinzón stated in an interview with the newspaper El Tiempo, the matter concerns only the prospects of "associate membership" in the alliance. However, the source of "Kommersant" in Brussels recalled: this format of cooperation in NATO, in contrast to the European Union, is not provided.

Ctrl Enter
Noticed oshЫbku Highlight text and press. Ctrl + Enter
We are
There was no bloodshed ...
Military Reviewin Yandex News
Military Reviewin Google News
8 comments
Information
Dear reader, to leave comments on the publication, you must to register.