Cuban armored vehicles based on the BTR-60

5 2013 June
16
Being the most advantageous ally of the Soviet Union, Cuba actively cooperated with it in many sectors of the economy, including the military-technical sector. The peak of such cooperation came in the sixties, which to some extent determined the further appearance of the armed forces of Liberty Island. Among other things, in the first half of the sixties, the Cuban military received at least a hundred and fifty BTR-60PB armored personnel carriers, which are still in active use today. However, after the collapse of the Soviet Union, Cuba lost the opportunity to profitably acquire new equipment and spare parts for the old one. Because of this, the state of the material part began to deteriorate, and its restoration turned into a specific problem.


In such circumstances, the Cuban industry had to look for ways to correct the situation, extend the life of technology, and create new types of it. BTR-60PB armored personnel carriers were chosen as the base for several new combat vehicles, which, for obvious reasons, could no longer serve their intended purpose. After certain improvements, the Cuban army lost several dozen armored personnel carriers, but acquired a new vehicle for a different purpose. 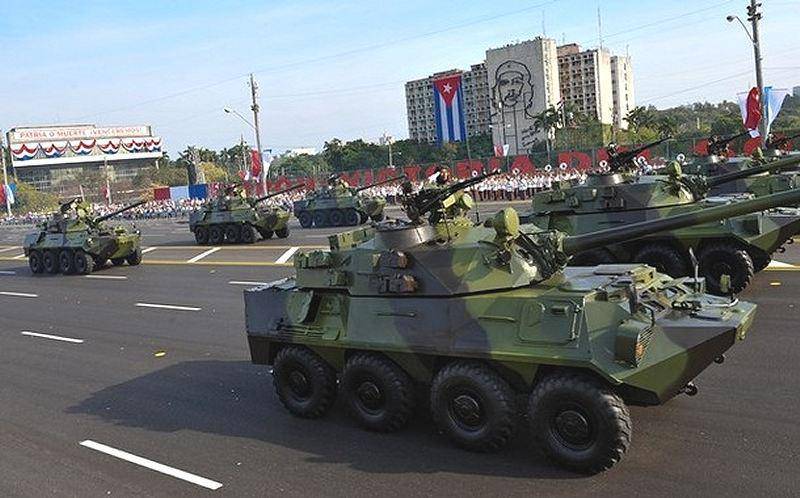 A few years ago, photos of a new infantry fighting vehicle, converted from an old armored personnel carrier, appeared. Without complicating the design, the authors of the project went the easiest and most convenient way. From the original BTR-60PB removed the tower with machine guns KPV and PKT, and in its place installed a new combat module. As a new weapon system for the upgraded armored vehicles, they chose a turret from an infantry combat vehicle BMP-1. To install it, we had to increase the hull shoulder straps, and also slightly modify the layout of the internal volume of the machine. According to some information, instead of the native power plant, a new, more powerful engine was installed on the car.

The firepower of the updated BTR-BMP has increased many times. Now instead of 14,5-mm and 7,62-mm machine guns, the machine can fire from the 73-mm Thunder 2-mm cannon and PCT 28-mm machine gun. In addition, the turret initially had a guide for launching anti-tank missiles of the Malyutka complex 7,62K9. Thus, in conditions of general combat, the new Cuban wheeled infantry fighting vehicle is capable of attacking with some efficiency the outdated types of enemy vehicles and even hitting them. In a clash with a well-equipped army, such a technique will probably not be able to have a big impact on the course of the battle.

It is noteworthy that the Cuban armored vehicle with armament of the BMP-1 largely repeats the design of the GAZ-50 wheeled combat vehicle created at the Gorky Automobile Plant in the early seventies. GAZ-50 passed all the tests, but did not go into the series due to the rejection of the idea of ​​a wheeled BMP. 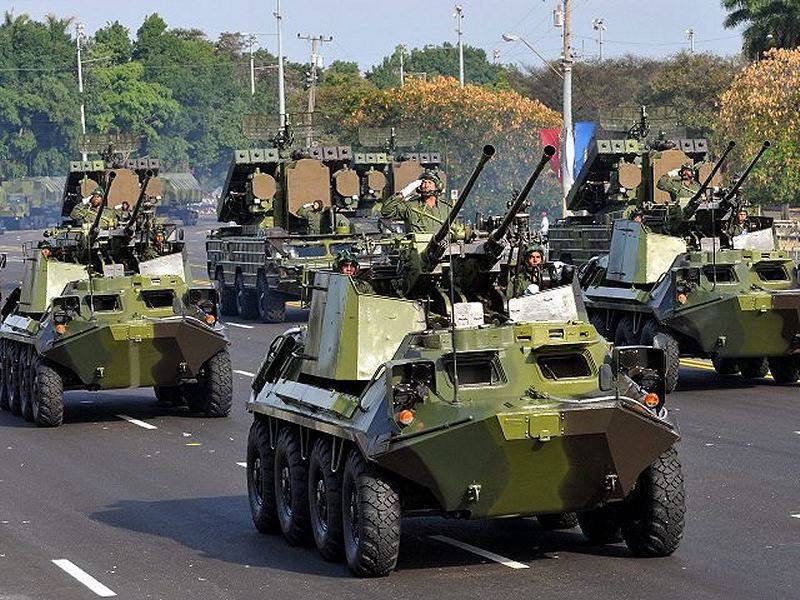 Soviet armored personnel carriers became the base for two self-propelled anti-aircraft installations, differing from each other not only in armament, but also in design. Machines equipped with 23 and 37 millimeter automatic cannons are designed to escort troops on the march and destroy low-flying targets. In the light of recent trends, such ZSU can be used to attack attack helicopters, but they are unlikely to be able to cope with modern rotary-wing machines.

Self-propelled gun with 23 caliber millimeters created the most simple way. A new unit with a twin ZU-23-2 was installed on the tower's native epaulet. The anti-aircraft system is mounted on an original pivot turret: the rear and a little arrows from the sides are closed with anti-bullet armor. Thus, it is partially protected by metal sheets, but at the same time it has the ability to monitor the situation around and fire at the targets. Judging by the photos, the anti-aircraft gun ZU-23-2 when installed on an armored personnel carrier has undergone minimal changes. Only some parts of his machine tool were corrected.

The second car of the military air defense was armed with 37-mm 61-K guns. Sufficiently large dimensions of this tool, recoil devices, etc. they demanded to make serious amendments to the design of the car carrier. When reworking such an anti-aircraft self-propelled gun, the BTR-60PB lost its troop compartment. During the conversion of the base armored personnel carrier, almost the entire upper part of the hull is removed from the control compartment to the engine-transmission compartment, and in its place is a wide and long horizontal platform that serves as the basis for the swinging turret. 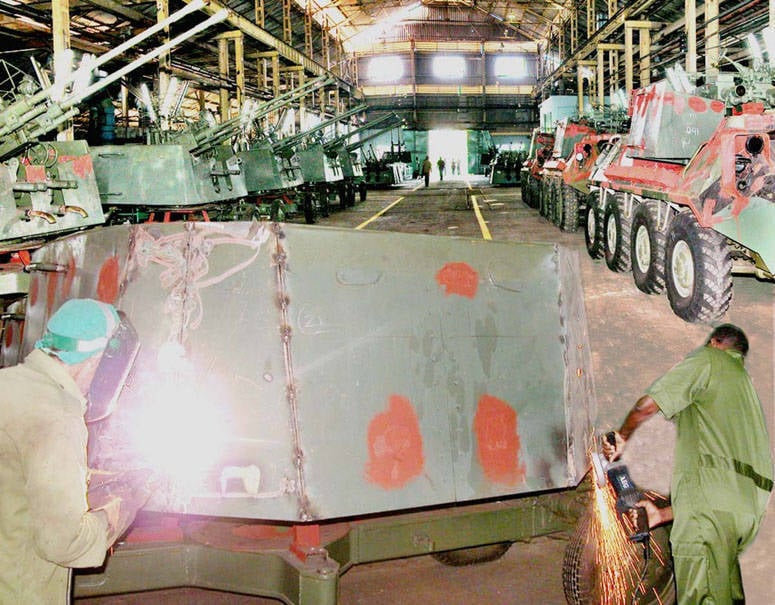 The tower of such an anti-aircraft self-propelled gun is a welded assembly of panels tilted inwards, inside of which there are two anti-aircraft guns and workplaces for their calculation. The horizontal guidance of the 61-K guns is carried out by turning the entire tower, the vertical one by raising the barrel. From the available information it follows that the calculation of anti-aircraft guns consists of three people. In this case, two gunner have their own sights, made at a special boom.

It is not hard to guess that these Cuban anti-aircraft self-propelled units based on the BTR-60PB armored personnel carrier have not very high combat potential. With firing ranges of up to 2,5 (ZSU with 23-mm guns) or 4 (61-K guns) kilometers, such combat vehicles cannot fully fight modern aircraft and helicopters. Technically developed air forces will be able to attack and destroy such anti-aircraft self-propelled guns from a safe distance without entering their zone of operation. 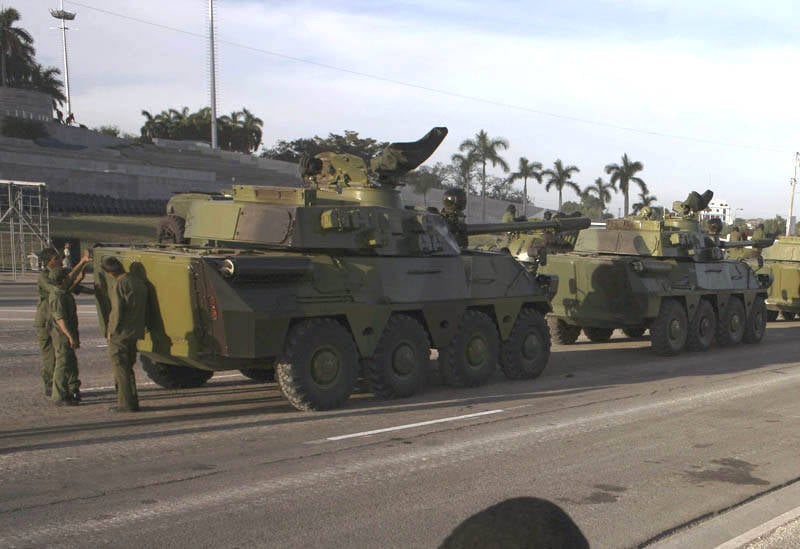 During the processing of Soviet-made armored personnel carriers, Cuban engineers were able to build even a combat vehicle belonging to the class of so-called wheeled tanks. The base chassis of the BTR-60PB again underwent substantial improvements, and another combat module was installed on the modified roof, different from the native turret with machine guns.

Armored personnel carriers, converted into wheeled tanks, lost part of the sides and roof of the armored hull. To install a large tower with heavy weapons in place of the middle part of the sides, we had to add the characteristic box-shaped “growths”, on which a part of the tower's shoulder straps fit. The roof was changed accordingly, and on the lower part of the sides new armored panels appeared, covering the gaps between the wheels.

As a basis for the armament complex of the new machine, we chose the tower of the medium tank T-55. However, the Cubans did not install the original tank turret on the armored personnel carrier chassis. They designed a new combat module with similar weapons and equipment, but with a different design. The new tower is much easier, because it provides protection only from bullets and shrapnel, and also has a large feeding area with stacks of ammunition. At the same time in the frontal projection of the new tower is very similar to the original tower of the tank.

The new light turret installed a rifled tank gun DT-10Т caliber 100 millimeters with suspension systems borrowed from the T-55. The auxiliary armament has also been preserved: a twin machine gun of the 7,62 mm caliber (PKT) and an antiaircraft anti-aircraft gun of the 12,7 mm caliber. Ammunition of the new wheeled tank slightly decreased in comparison with the T-55: no more than 40 unitary projectiles fit in the stern niche of the turret.

An armored personnel carrier with a large turret and heavy weaponry increased its weight. The combat weight of such a wheeled tank, according to various estimates, is close to 19-20 tons. Because of this, the combat vehicle lost the ability to swim and can cross water only through bridges or with the help of water craft. The Cuban wheeled tank resembles some foreign cars in its appearance and expected characteristics, such as the Italian B1 Centauro or the French AMX-30RC. All of them are armed with rifled guns caliber 100 millimeters and above. Such weapon enough to deal with enemy light armored vehicles, fortifications, and even tanks of outdated models. With all its shortcomings - first of all, due to the large age of the basic components - the wheeled tank from Cuba is fully capable of performing the tasks characteristic of this class of armored vehicles and, under certain circumstances, can compete with its foreign counterparts. 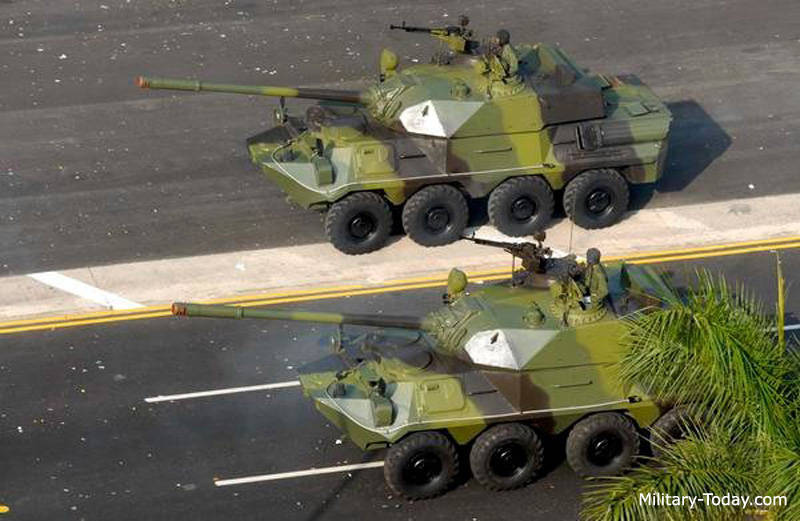 All of the above-described combat vehicles based on the Soviet BTR-60PB armored personnel carrier clearly show what tricks the countries that do not have a developed defense industry, but who need armored vehicles, go through. The samples obtained from outdated equipment cannot even be called modern even with a big stretch, and their combat potential looks insignificant. However, in the absence of worthy alternatives, the Revolutionary Armed Forces of Cuba have to use just such a technique. In this case, it remains only to praise the desire of the Cuban military to update the fleet of armored vehicles and the creation of new types, even on the basis of the old ones.