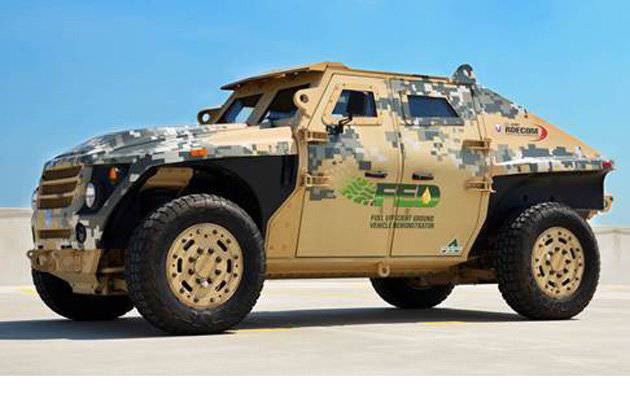 The FED project was developed from scratch under the leadership of a team with Ricardo, which included representatives of the scientific advisory group to control the US Army vehicles and armored vehicles (TARDEC). The program aims to reduce US oil dependence through the development of fuel-saving innovative technologies.

The demonstrator was equipped with a Cummins I4 turbocharged engine, Goodyear tires with low rolling resistance and an aluminum chassis developed by Alcoa Defense.

The FED project is being tested at the US Army site in Aberdeen over the past 19 months.

The analysis showed that, compared to the American HMMWV M1151 military vehicles as standard, the FED provided the 72's percentage improvement in fuel efficiency. FED indicators were evaluated on a number of realistic duty cycles, including highways, off-road driving and idling.

In addition to improved fuel economy, field tests demonstrated significantly improved acceleration rates compared to current cars, even with loads of up to almost seven tons.

Chief Project Engineer Ricardo Wesley Sharmen (Wesley Scharmen) said: "We implemented a relatively conservative approach using available or near-affordable technology to achieve our fuel economy goals, and we proved that these goals are achievable. This approach has reduced costs and brought closer possibility of production of the final product ".

Carl Johnson (Carl Johnson), head of the TARDEC team at the FED project, added: "The team chose a common approach to improving the fuel efficiency of the car. And they did it using proven technologies. When the government and industry work together, the results can be significant. 72's a percentage increase in fuel economy gives us a significant competitive advantage in this area. "

Since fuel is the second most delivered cargo for ground forces (water first), FED is important for reducing fuel consumption in the deployment area, along with improving military vehicle technology itself.

Tom Apostolos, president of the American branch of Ricardo Inc, said: "The FED is an extremely valuable model for the further development of military vehicles. It creates the conditions for creating cost-effective, high-performance, fuel-efficient vehicles that will allow American troops to perform tasks in the best possible way. "

Ctrl Enter
Noticed oshЫbku Highlight text and press. Ctrl + Enter
We are
The world market of armored vehicles. Part of 3Situational analysis of the death of the MH17 flight (Malaysian Boeing 777), made on the basis of engineering analysis from 15.08.2014
Military Reviewin Yandex News
Military Reviewin Google News
30 comments
Information
Dear reader, to leave comments on the publication, you must to register.