Or scatter, or go to the Taliban

5 2013 June
62
In the event of a large-scale conflict in Central Asia, rely on the Tajik army as a serious military force


28 May at the meeting of the presidents of Russia Vladimir Putin and Tajikistan Emomali Rakhmon in Bishkek at the informal summit of the CSTO discussed the issue of providing military assistance to the Tajik armed forces, taking into account the prospects for the development of the situation in Afghanistan after 2014. The head of the Tajik state expressed extreme concern over the security of the republic after the withdrawal of the collective NATO forces from Afghan territory. Earlier, the Russian leadership has already decided to allocate 200 millions of dollars for the modernization of air defense and the repair of military equipment in Tajikistan, as well as to put fuel on the same amount on favorable terms. Is the army of this Central Asian republic worth such an investment?

The army of Tajikistan was formed during the civil war of 1992 – 1997. Representatives of various regional clans fought in it: on the one hand, Kulyab and Gissar, on the other, Badakhshan, Kurgan-Tyube and Garm. The Leninabad (Khujand) clan occupied neutrality, but rather it was a Kulyab clan. With considerable military support from Russia and Uzbekistan, the Kulyabists and Gissar men, who created the Popular Front of Tajikistan and captured Dushanbe at the end of 1992, won. Their opponents formed the United Tajik Opposition, which included both Islamist and secular parties.

The civil war officially ended on 27 on June 1997 of the year when a peace agreement was signed in Moscow whereby opposition figures were integrated into government structures, receiving 30 percent of all government posts, and 4,5 thousands of opposition fighters into the government army. Opposition groups that did not recognize the agreement continued to resist. Some of them went to Afghanistan. Separate mountain areas are still not controlled by government troops (mountains occupy 93% of the territory of Tajikistan).

In total, during the civil war, according to various estimates, 100 – 150 killed thousands of people. Tajikistan left the vast majority of Russian-speaking citizens. In addition, almost all people from the north left the south, and people from the south left the north. Due to high unemployment, a significant part of the population leaves for work in Russia.

At present, there are almost no members of the civil war with combat experience in the army of Tajikistan. 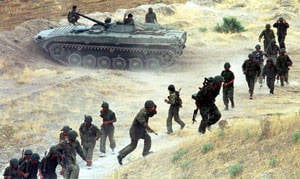 23 is considered to be the birthday of her in February of 1993, when parts of the Popular Front marched through Dushanbe. In April, the creation of the Supreme Council of 1994 was formalized by a resolution of the Supreme Council of Tajikistan, and in 1995, the law “On Defense” was adopted. The supreme commander of the armed forces is the president of the country. The Ministry of Defense provides financial, technical and logistic support for the army and is responsible for its combat training. Operational leadership assigned to the General Staff.

The military doctrine of Tajikistan was adopted on October 3, 2005, by the Majlis oli (parliament) of the Republic of Tajikistan. It provides that no state is an enemy of Tajikistan and that it does not have territorial claims to any state. Military doctrine is defensive in nature and focuses on the collective efforts of the CSTO in repelling external and internal threats.

The army is recruited on the basis of universal conscription. The term of service on conscription - 24 month. Since 2000, contract recruitment has been stopped due to government fears that influence on the opposition’s armed forces will increase at their expense. As a result, the army has practically no corps of professional sergeants. Young people 18 – 27 are recruited for years. The number of males between the ages of 16 and 49 in 2010 is estimated to be 2013 thousand people, of which 1490 thousand are considered fit for military service. Every year, 76 reaches thousands of men of military age, of whom about 7 – 9 thousand people are called up for service.

Cases of draft evasion and desertion are common. Sharp contradictions remain between people from various clans (soldiers and officers), which sometimes leads to armed clashes. The level of discipline and fighting efficiency is low. The troops maintain a high level of corruption. Mostly poor rural people serve in the army, while the more affluent part of the population pays off from the service through bribes. The soldiers are badly fed. Uniforms for many of the old, still the Soviet model.

Republic of Armenia in numbers

The total number of armed forces of Tajikistan - 8,8 thousands of people. Military spending is about 1,5 percent of GDP. In 2012, they can be valued at 114 million dollars at the official exchange rate and at 266 million dollars at purchasing power parity.

In Tajikistan, in addition to the armed forces and other power structures, numerous irregular armed formations are maintained, mainly engaged in the protection of various industrial enterprises and subordinate to the leaders of local clans.

Tajikistan is a member of the Collective Security Treaty Organization (CSTO). Three battalions of mobile troops of the republic are included in the Collective Rapid Deployment Forces (KSBR) of the Central Asian collective security region operating within the framework of the CSTO.

Air Force troops count 1500 people. They consist of one helicopter regiment and are armed with one Tu-134, four combat helicopters Mi-24 and 12 of transport helicopters Mi-8 and Mi-17. The country's air defense forces are currently unavailable, their functions are practically performed by the air defense of the ground forces, although they are organizationally united with the Air Force. The armament of the air defense regiment consists of 20 ZRK C-75 “Dvina” and 17 C-125 “Pechora”. In addition, there is an unidentified number of US FIM-92 Stinger MANPADS and 574 MANUAL 9K32 “Strela-2” MANPADS, a significant part of which is in conservation.

Border troops have 1500 men in two brigades. They have two Mi-8 helicopters and two Mi-24. Suspected of active involvement in drug trafficking from Afghanistan. At the same time, 80% of all drugs seized in Central Asia account for Tajikistan, which ranks third in the world in the number of seized opiate drugs, mainly due to Afghan heroin. Nevertheless, most of the local and Afghan drugs are shipped to Russia and, to a lesser extent, to Western Europe. Tajikistan is also a major consumer of opiate drugs, mainly cheap hashish.

The National Guard, reporting directly to the president, has 1200 men in three battalions. She is responsible for guarding the president and other senior government officials.

The Ministry of Security has a special-purpose squad "Alpha" (at least 100 people).

The Ministry of Emergency Situations has a militia of up to 2,5 numbering thousands of people who actually perform the functions of protecting the borders with Kyrgyzstan and Uzbekistan, while the border troops are fully focused on protecting the Afghan border.

Negotiations on border delimitation and removal of minefields are continuing between Tajikistan and Uzbekistan. With Kyrgyzstan, there is a territorial dispute over the ownership of the territory in the region of the Isfara Valley, which does not allow for delimitation of the border.

The 201-I Russian military base in Tajikistan, created on the basis of the 201-th motorized rifle division, has six thousand people, of whom at least 15 percent are residents of Tajikistan who have Russian citizenship. It is deployed in the state of a motorized rifle brigade with three motorized rifle battalions - one battalion each in Kulyab, Kurgan-Tyube and Dushanbe. In service are T-54 72, 300-2 armored infantry fighting vehicles, BTR-80 and MT-LB, 100 2S1 artillery installations 2S3, 2S12 and multiple rocket launchers 9P140 "Hurricane" plants, five Su-25 and four Mi-8.

In October 2012, an agreement was reached to extend the presence of the 201 military base in Tajikistan to 2042. However, its ratification by Dushanbe conditions the receipt of funds from Moscow for the development of the energy sector and the modernization of the national armed forces. Base rent is practically not charged, but in exchange for this, Russia does not interfere with labor migration from Tajikistan. According to some estimates, the annual Russian transfers from Tajiks to their homeland amount to about three billion dollars. Starting in January 2013, labor migrants were able to register not for a week, as it was before, but for 15 days, and a work permit was issued for a period of up to three years.

The Indian Air Force has an advanced operational air base in Farhad at Aini airfield, 25 kilometers south-west of Dushanbe, modernized by India, and the cost of modernization was about 70 million dollars. According to some reports, the squadron of Mi-17 helicopters, training aircraft "Kiran" and MiG-29 fighters are stationed here.

One Tajik OSCE observer is in Bosnia and Herzegovina.

In terms of combat readiness, the army of Tajikistan in the region exceeds only the army of Kyrgyzstan. It is unable to independently repel any serious external or internal threat. In repelling these threats, the Government of Tajikistan relies mainly on Russian troops. The withdrawal of the 201 base from Tajikistan is threatened by the resumption of civil war, in which groups from adjacent areas of Afghanistan may also be involved.

It can be assumed that after the reduction of the international military presence in Afghanistan, the significance of the Russian bases in the region will only increase. Already heard the talk that the militants - people from the Central Asian and North Caucasian republics, fighting on the side of the Taliban, began to concentrate along the Tajik border. However, many are confident that the prospects for the Afghan invasion of Central Asia are no more than a myth, the spread of which suits both the Tajik and the Russian side: the first is counting on another batch of support, the second gets further justification for its presence in the region.