"Russia Bequeathed to All of Us" 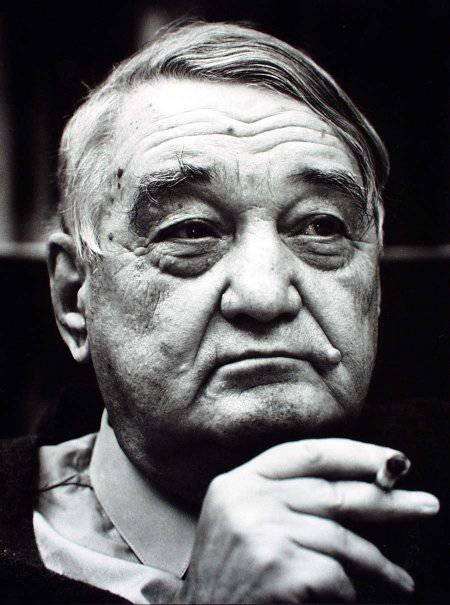 Biography
The son of poets Nikolai Gumilev and Anna Akhmatova. From 1917 to 1929 lived in Bezhetsk. From 1930 in Leningrad. In 1930-1934 he worked on expeditions in the Sayan Mountains, in the Pamirs and in the Crimea. With 1934 studying at the Faculty of History of the Leningrad University. In 1935, he was expelled from the university and arrested, but released after some time. In 1937, reinstated at LSU. At the beginning of 1938, he was arrested while a student at Leningrad State University and sentenced to five years. He was serving a term in Norillag, working as a geologist in a copper-nickel mine, and was left in Norilsk with no right to leave.

In the autumn of 1944, he voluntarily joined the Soviet army and fought as an ordinary anti-aircraft artillery regiment in the 1386, which was part of the 31 anti-aircraft artillery division on the First Belarusian Front, ending the war in Berlin. In 1945, he was demobilized, reinstated at the Leningrad State University, and graduated from the beginning of 1946, and entered the postgraduate school of the Leningrad branch of the Institute of Oriental Studies of the USSR Academy of Sciences, from which he was expelled with the motivation “due to the inconsistency of the philological training of the chosen specialty”. December 28 1948 defended the dissertation of the candidate of historical sciences at Leningrad State University and was accepted as a research assistant at the Museum of Ethnography of the Peoples of the USSR.

On November 7 of November 1949, he was arrested and convicted by the Special Meeting for 10 years, which he served first in a special camp in Churbay-Nura near Karaganda, then in a camp near Mezhdurechensk in the Kemerovo Region, in the Sayan Mountains. In 1956, he was rehabilitated due to the lack of corpus delicti. Since 1956, he worked as a librarian in the Hermitage. In 1961, he defended his doctoral dissertation in history ("Ancient Turks"), and in 1974, he defended his doctoral dissertation in geography ("Ethnogenesis and Earth's Biosphere"). Prior to retiring in 1986, he worked at the Research Institute of Geography at Leningrad State University.

Died 15 June 1992 of the year in St. Petersburg. He was buried at Nikolsky cemetery of the Alexander Nevsky Monastery. In August 2005 of the year in Kazan "in connection with the days of St. Petersburg and the celebration of the millennium of the city of Kazan" a monument was erected to Lev Gumilyov. On the personal initiative of the President of Kazakhstan N.Nazarbayev in 1996 in the capital of Kazakhstan, Astana, one of the country's leading universities, the Eurasian National University named after L.N.Gumilev, was named after Gumilev.

Gumilev and historical science.
Lev Gumilyov proposed a set of original methods for studying ethnogenesis, consisting in a parallel study of historical information about the climate, geology and geography of the surrounding landscape and archaeological and cultural sources. The basis of his research baggage was the original passionate theory of ethnogenesis, with which he tried to explain the laws of the historical process. In the actual research L.N.Gumilev adhered to ideas close to Eurasianism. For example, he considered the scale of the Mongol-Tatar yoke to be greatly exaggerated. In his opinion, symbiosis was more characteristic of Russian-Mongolian relations, and serious clashes were associated mainly with Horde Muslims, more radical than the rest of the Mongols. China appears to him not as a peaceful bastion of civilization fighting against invaders, but as a predatory aggressor. He says the same thing about Europe: criticism of Eurocentrism occupies a large place in his writings. He considers ancient and modern Russians different ethnic groups. 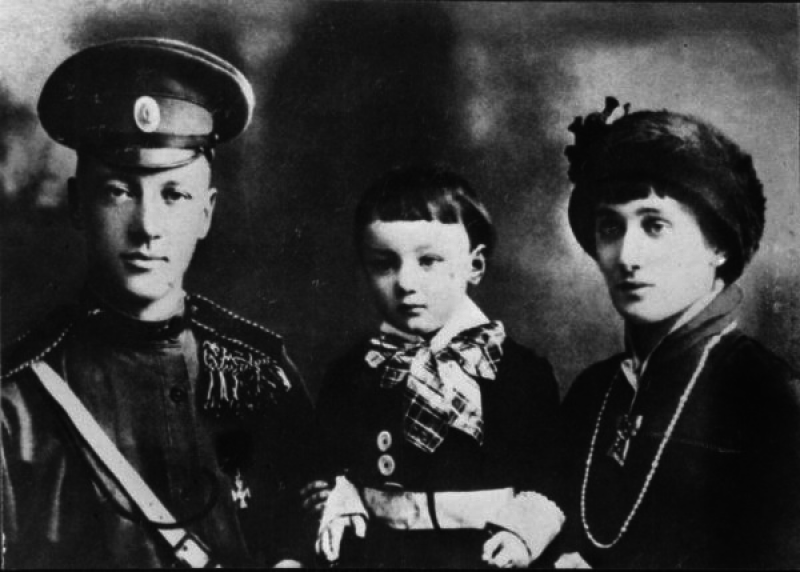 Russia bequeathed to all of us

Certainly, the domestic history is many-sided and complex, - began our conversation Lev Nikolayevich. - There are no straight lines and unambiguous answers. But, alas, historical science gradually turned from a source of people's self-knowledge into a very complicated matter. History, meanwhile, is an exact science. The historian, no matter how much he advocates patriotism, must be impartial, follow the fact in its logical, historical and critical understanding.

Our society today is in turmoil of contradictions, and this, of course: a breakthrough into the future is always difficult, but our difficulties, I am convinced of this, can be overcome. And in order to understand this, it is necessary to clarify for oneself the peculiarity and uniqueness of Russia's historical path, its role in world history, to know exactly where we are from and whose genetic memory we keep in ourselves.

- Many are trying to answer this question now, and they are especially intently searching in the recent past.

- It is fruitless and leads us further away from the truth. After all, our history and culture was not born in the seventeenth year. The peculiarity of our statehood manifested itself already in ancient times, on the earth lying between the warlike West and the Great Steppe.

- However, every nation keeps the past in itself, and in order to get along with foreigners, one must respect their ethnic uniqueness and foresee their reaction to each rash word or deed. After all, how many conflicts today occur due to mutual misunderstanding or false confidence that all people are the same. 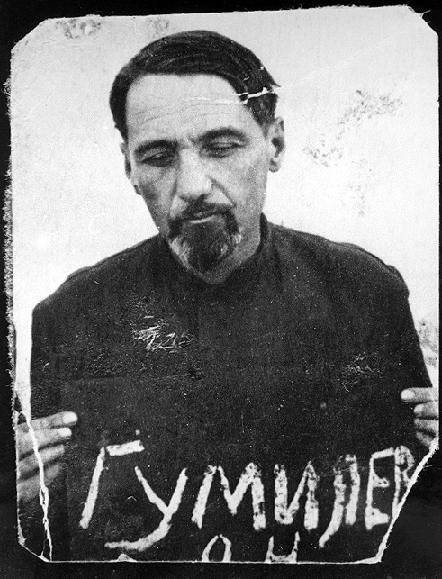 - Do you think that our ancestors had such experience and were more tolerant and sensitive to each other?

- And they not only had, but also kept it carefully ...

- Lev Nikolayevich, today, when opinions in the literary and scientific world are so conflicted and contradictory, you, if I may say so, take the “middle” position. The so-called “leftists” accuse you almost of chauvinism, and the “rightists” do not agree with your thoughts about the Mongol-Tatar yoke.

- Unfortunately, this is true. Although the time for strife is inappropriate. Today, more than ever, consolidation of all patriotic forces is needed. As for the yoke, I am fundamentally against its current interpretation. This thought came and was born in the West. Moreover, its author, the French historian de Tou, relying on the clearly tendentious "Notes on the Moscow War" by the Secretary of State of the Polish King Stefan Batori R. Herberstein. he hastened to rank all together: the Turks, the Mongols, and the Russians among the monstrous carriers of evil and destruction.

Centuries have passed, but this unfortunate theory, exposing our past in a negative light, is a direct outrage upon the glorious deeds of our ancestors. Think about it - three hundred years of submissive slavery! Is this consistent with logic and a Russian freedom-loving character? This theory and now yields its fruits: its logical consequence is the chimera of Russia as a prison of nations, and today we pay the price for it. And could, in principle, unite the lands and peoples around Moscow be the result of mere capture and violence? Apparently not. Without goodwill and mutual consent, this is impossible.

- So - without a good and real knowledge of our past, to make predictions for the future is an adventure?

- Knowledge of the past to today's man gives, firstly, a true understanding that not the West, not the East, but Russia, as a common, collective, international, if you like, concept, is the mother and the true home of the peoples inhabiting it. Secondly, not knowing the history of their homeland, it is difficult to be a patriot. And, thirdly, the roots of many of today's national contradictions lie precisely in the past. Tracing their historical development, you can find painless ways to solve them.

- We are talking about long past wars, but history is moving. I would like to know your attitude to the armed defense of the Fatherland, to today's army.

- What can I say about the armed defense of the Fatherland, when I myself defended him during the Great Patriotic War on the front lines, and my father had two Georgy, and grandfathers, and great-grandfathers were military men. If you believe family traditions, my distant ancestor commanded one of the regiments on the Kulikovo field and died there. So I’m more likely not from intellectuals, but from a military family, than I am very proud and constantly emphasize it. For me, military service is an integral part of civic duty. Unfortunately, I hardly know the modern army, but for centuries the army has been the bearer and guardian of true patriotism, pride in belonging to the great and united Russia. Having lost these feelings, we will inevitably lose our historical face. 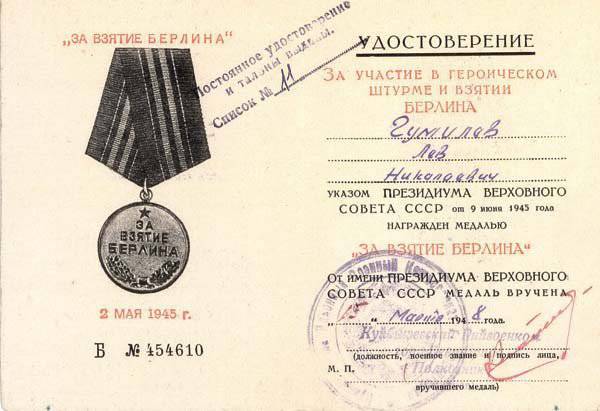 “I don’t know if you are following the press and television, but today a whole barrage of accusations of all existing and non-existent sins falls upon the army.

- I am not against criticism, especially if it is constructive. But the discredit of the strong has always been the lot of the weak and self-serving. Of course, it is easier to raise a coward, hoping that he will not have to fight, to experience any difficulties and hardships, than to educate a warrior and a citizen. I think that blind pacifism causes irreparable damage to our society.

- Lev Nikolayevich, let's return to your books, and in particular to the theory of drive, that is, the energy potential of ethnic groups. Applying it to our country, at what level are we?


- Paradoxically, with all our troubles, on the rise. After all, we are a relatively young ethnic group, about six hundred years younger than Europe. Ancient Russia refers to Russia in approximately the same way as ancient Rome to Italy.

- So, if we believe you, everything is ahead?

- Of course, if we ourselves do not do the next nonsense. In a large multi-lingual Russia, its path, which it has chosen, has defended and is obliged to defend in a difficult struggle.

The conversation was led by Major V. Kazakov