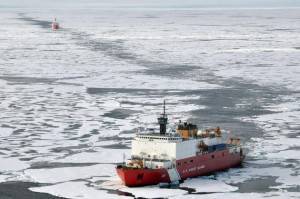 Strategic analysts of the US Coast Guard believe that the likelihood of deploying naval bases in high-latitude regions is currently increasing.


The retreat of multi-year ice from some areas in the Arctic during the summer of last year made it possible for ordinary courts to work in these areas.

Three specific goals led people to these remote areas of the ocean: Exploration and science, industrial resource extraction and cargo transportation. On the one hand, these goals lead to further enrichment of humanity, but on the other hand, they can bring problems: the safety of people at sea, the safety of coastal countries from threats that can be delivered by sea, and the environmental safety of these regions. The mission of the coast guard of the countries possessing the Arctic possessions is to ensure the security and management of the territorial waters of the state. On an ongoing basis, the protection of the Arctic borders of Russia, the USSR and Canada has been carried out since the end of the XIX century.

The Arctic coastline is characterized by extremely harsh and unstable weather conditions. Indigenous people in high-latitude regions have retained their living culture, transmitted through countless generations. They perceive sea ice, fast changing winds and several months of the polar night as commonplace. But to a man from mid-latitudes, the arctic weather seems like hell.

The development of the Arctic expanses began in connection with the search for sea lanes, both the northern sea route along the Eurasian continent and the north-western passage along the northern coast of the American continent. But the uncertainty and unpredictability of impenetrable sea ice did not allow regular use of these routes.

In the Americas, harsh Alaska was given new visitors by the gold rush of the late nineteenth century. Changes in technology, new strategies have led to the awakening of environmental awareness, but the extremely high risk of losing ships due to severe ice conditions at sea made commercial ventures in this region unprofitable. Strictly speaking, commercial mining of marine mammals in the Arctic became unprofitable at the beginning of 1900's.

Mineral exploration and research activities in the Arctic continued throughout the twentieth century and are still ongoing. Most of these studies consisted of small, seasonal efforts, often supported by the military. These efforts include geographical and scientific discoveries, the construction of early warning systems and the advancement of technologies for adaptation to arctic conditions. Throughout this era, the Arctic countries have retained the ability to navigate in the Arctic Ocean at all times and seasons.

The revival of commercially viable resource extraction in the Arctic, namely oil and natural gas, began with the transit through the Northwest Passage of the Manhattan oil tanker in 1969. At one time, the development of coastal areas in the framework of hydrocarbon production was associated with the construction of pipelines. However, the demand for energy, as well as the fixed summer and autumn decline in the level of ice in the Arctic latitudes, the improvement of offshore drilling technologies led to the fact that oil companies began to try to rent areas of the coastal shelf for offshore drilling. The increase in shipping in the Arctic region was caused by the need to deliver infrastructure for the development of offshore oil industries. This increased activity represents a new challenge and a potential threat to the region.

Polar история It is replete with many examples of maritime emergencies that required adequate response measures to protect life, property, and prevent damage to the environment. So, back in 1897, the predecessor staff of the US Coast Service found themselves on the high seas with a herd of deer. In the Russian region, you can recall the tragedy of the ship Chelyuskin, which tried to break through the Northern Sea Route in one navigation, but found itself in an ice trap.

It was planned to use high latitudes for military purposes. During World War II, the UK considered a project to build a huge aircraft carrier out of ice, an American missile base was built in the thickness of the Greenland ice, and the Soviet strategic aviation planned to use ice airfields. Since then, high latitudes have become not only a place for conducting scientific experiments and mining, but also a place of pilgrimage for tourists. In 2010, the cruise ship "Clipper Adventurer MV" ran aground near Kugluktuk. To save the ship, the intervention of two Canadian coastguard icebreakers was required.

The seasonal decline in sea ice has increased the commercial exploitation of marine natural resources. These activities increase the risk of contamination of the fragile Arctic marine ecosystem, on which balance the lives of coastal people depend. In addition, any activity in remote regions of the world poses risks to personnel due to the presence of problems such as poor information about the surrounding installation, and extreme environmental conditions. Growth trends in shipping in the Arctic have also increased the likelihood of a quick maritime emergency response. To ensure a permanent maritime presence in the arctic regions, it is necessary to develop the minimum necessary coastal infrastructure on the coast of the Arctic Ocean. The development of a chain of sea bases along the northern sea routes is likely to become the most viable option for the coast guard of all Arctic countries. In addition, a number of analysts in the United States seriously raise the issue of creating a carrier class of the sea class, which can reliably ensure safety and leadership, regardless of the season or the state of the environment.

Ctrl Enter
Noticed oshЫbku Highlight text and press. Ctrl + Enter
We are
Hybrid threats have arisen in the ArcticMilitary reform as an integral part of the security concept of the Russian Federation: Systematic dynamic assessment
15 comments
Information
Dear reader, to leave comments on the publication, you must to register.