5 2013 June
20
It is no secret that the most common constructions generate a mass of "clones", as well as samples weaponswhich are made in their image and likeness with minor changes. It often happens that a sample of a weapon that is made on the basis of another sample generally belongs to a different class. It is this development that we will try to make out in this article. It will be about the sniper M16, originally from the Philippines, known as MSSR.

This rifle is a conventional М16А1, deprived of the possibility of automatic fire, endowed with a higher-quality barrel of greater length. Practically everything else in the weapon was left unchanged, except for the carrying handle, it was removed later, although it was present on the first samples. In this regard, the rifle, in its final version, does not have open sights, which, in my opinion, is not the most reasonable solution, given that the weapon is used at medium distances. The Philippine designers in general brought the weapon to the required characteristics, so the accuracy of the rifle is equal to 1 angular minutes, which fully meets the requirements of the military.

The sniper M16 4,55 kilogram weighs, its length is 1073 millimeter with the length of the barrel 610 millimeters. It feeds from shops with a capacity of 20 or 30 cartridges. At distances over 600 meters it becomes almost useless, as it uses all the same ammunition 5,56x45.
Automatic weapons are also completely similar to the M16, that is, built on the basis of the removal of powder gases from the barrel bore directly into the receiver. The layout of the main controls is the same as the “antipode” of the Kalashnikov assault rifle. The modified forearm of the weapon has a mount in its lower part for the installation of folding unregulated bipods. For transportation there are uncaps for which the belt clings. 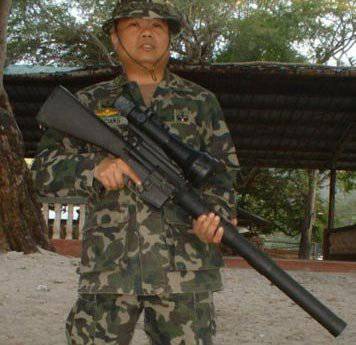 It is difficult to evaluate such weapons, seemingly as the MSSR is a sniper rifle, but on the other hand it’s still the same M16 with a new barrel and minor modifications. After all, if, for example, put an optical sight on a Kalashnikov assault rifle, then it would not occur to anyone to call it a sniper rifle. However, it is far from always necessary for a sniper to shoot at long distances, very often targets are at distances accessible to such weapons, so that on the whole the creation of such a sample is fully justified. Given the fact that the Filipinos are counting on the use of weapons on their own territory, it is not surprising that they do not need a large number of sniper rifles with an effective range of more than a thousand meters. Naturally, large-caliber sniper rifles are in service, but since most of the tasks can be performed by the MSSR, it is the main sniper rifle.

On the basis of this weapon, a silent version was later developed in the same caliber. This weapon differs only in an integrated device for silent shooting with large volume and a night sight included in the set. What ammunition is used in weapons, unfortunately it is not known, but the fastest full-fledged 5,56х45 is the fastest.
Based on all the above, we can conclude that the MSSR sniper rifle has a right to life, even though it is a slightly modified M16. Well, the problems that were inherent in the M16А1, in this weapon are absent due to the fact that the rifle is unable to conduct automatic fire, which greatly increases its reliability.