5 2013 June
42
As gunsmiths say, the military laws of physics are not written, because so often you can meet the requirements for arms contrary to common sense. Our designers, almost always, managed to do the almost impossible and, if not completely satisfy all the requirements in their designs, then at least come close to them. A striking example is the PP-90 submachine gun, which is usually negative reviews. Nevertheless, this weapon is very interesting, and most importantly it fully complies with the requirements that were imposed on it. 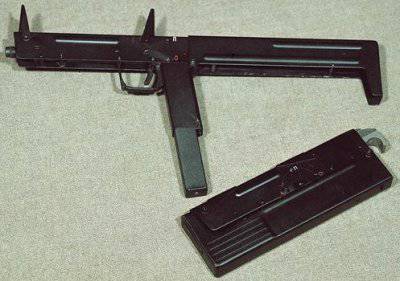 This submachine gun was developed at the beginning of the 90s of the last century, it was then that a compact PP was required, which would not burden the shooter when worn with its weight or dimensions and would be ideally suited for concealed carry. It was decided to make the weapon collapsible, although many weapon companies had already pierced it without having achieved the distribution of such samples. They tried to make a folding submachine gun and decided to make Tula gunsmiths and ensured that the folded weapon didn’t even look like a weapon, although the sample was only a separate one, but it looked like a separate piece of PP. The appearance of the submachine gun is quite interesting. When folded, it is a millimeter 270 block, 90 wide, and 32 thick. From this block, literally in 3-4 seconds, you can expand a submachine gun with a length of 485 millimeters and a kilogram 1,8. 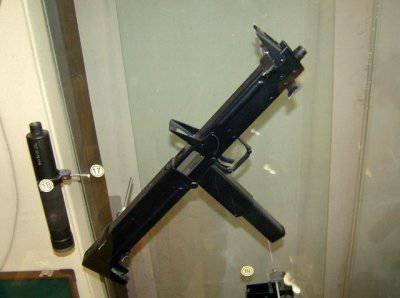 The sample automatics is built according to the scheme with a free shutter, fire is fired from the closed shutter, only the automatic one does not have a single fire. The rate of fire is equal to 600-800 shots per minute, so, in principle, keep track of used ammunition arrow simply. It is powered by a PP-90 submachine gun from detachable box magazines with a capacity of 30 9x18PM cartridges, PMM cartridges cannot be used. The effective range of the weapon does not exceed 50 meters, which is not supported by the best aiming devices and ergonomics of the submachine gun, however, a large effective range of firing is not required from such a sample.

The design of the weapon very much resembles a folding butterfly knife. When bringing a submachine gun into a state of combat, the block is decomposed into two parts: the receiver and the butt, the handle remains in the center, it is the receiver of the store. Unfortunately, the design of the weapon is such that it is impossible to store the submachine gun in the folded state with the magazine. Therefore, in order to start firing a weapon, you first need to expand it, insert a magazine, and raise the shutter, while at will you also need to raise aiming devices that have not the most rigid fixation, which affects the effectiveness of the fire from the weapon. It is on the sights cussing most often. Butt arms, by virtue of maintaining the compact size of the submachine gun in general, also turned out very short and a person who is well developed physically will be uncomfortable. Reliability of PP automation also raises many complaints, however, whatever one may say, and when the weapon folds and unfolds in different directions, the play of parts is inevitable, and therefore there will be problems with the work of the sample. 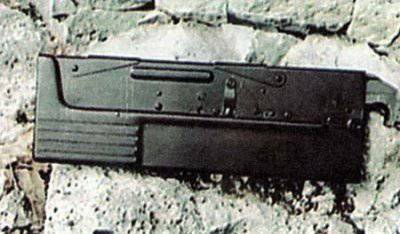 In general, the weapon turned out to be quite simple, and although you can’t put it in your pocket, you cannot deny that the designers managed to create a sample that is compact enough when folded. Naturally, this PP is not suitable for widespread distribution, the reason for this is the small effective range of the PP-90 and the long preparation time of the weapon for firing, and complaints about the operation of the weapon are also clearly not to the benefit of this submachine gun. Despite this, it is impossible to evaluate this weapon strictly negatively; you should not forget that this is a folding PP of compact dimensions, and this weapon is quite specific. But our compatriot is often easier to swear at the weapon, without taking into account the fact that this submachine gun is not a full-fledged sample, although they ask it as if it were an ordinary PP.