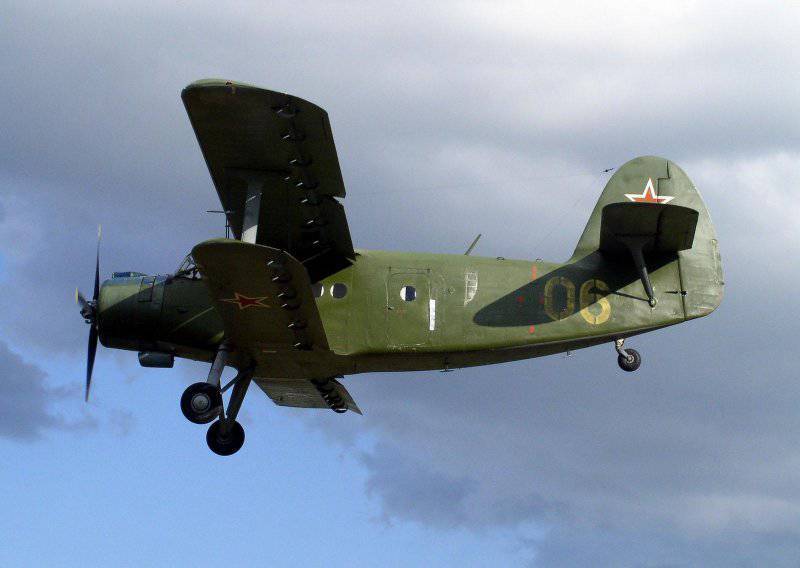 At the very beginning of the development and creation of the legendary Kukuruznik, the possibility of using this maneuverable light aircraft for military purposes was considered. In the spring of 1947, the ANTK named after OK Antonov (in the past, OKB-153) began the development of a special three-seat aircraft designed for night reconnaissance and artillery fire adjustment. The minimum run and mileage of the An-2, its low speed, high maneuverability, were fully suitable for these tasks. 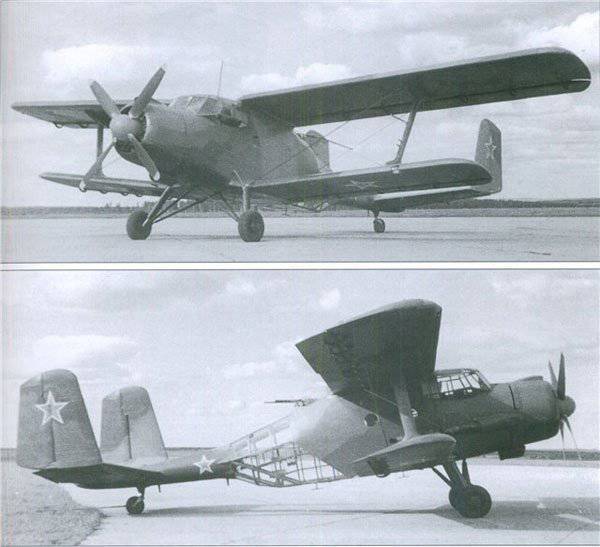 The created aircraft was almost the complete analogue of the base model. Only the fuselage and tail assembly have undergone significant changes. An observer cabin was mounted on the fuselage, which was a glazed truss structure. A stabilizer with separated keels and a non-retractable tail wheel were attached to it. Also, to repel enemy attacks from the rear hemisphere behind the upper wing, we installed a turret installation VEU-1 with a 20-mm gun DB-20E. The engine and crew jobs were protected by armor. The plans of the creators of the new combat vehicle included the use of the aircraft as a night bomber, for which he was additionally equipped with two cassettes in the fuselage for vertical suspension of six 50-kg bombs and four underwing holders for 100-kg bombs, as well as one more 20- mm gun (in the lower right plane). The aircraft received the designation "F" ("Fedya"). 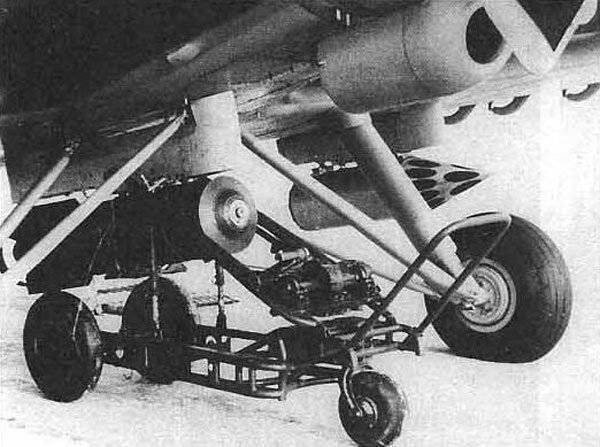 Suspension of bombs and blocks Nurs

In the spring of 1949, the first prototype of the new aircraft took to the air, it had the designation An-2NAK (night artillery spotter). The tests of the car were carried out by pilots V. Didenko and A. Pashkevich; they continued until February of the 1950 year and were recognized as successful. But at the beginning of the same 1950 of the year, it was decided that it would be more expedient to use helicopters to perform such tasks, and this modification of the An-2 was not launched into mass production.

The next combat modification of the An-2 was the project of the high-altitude aircraft An-2А, designed to combat automatic reconnaissance balloons. This aircraft was created on the basis of the An-6 meteo-probe, it was equipped with an automated sight-finder, as well as a remote installation equipped with an AM-23 gun and a searchlight for night search of targets. From the tail of the fuselage was removed meteorologist cabin.
Also, simultaneously with the An-2A project, another project was developed with the designation An-3, suggesting a more radical remake of the An-2. An-3 was supposed to be a double strut-all-metal monoplane with a large elongation wing. But these projects remained only in the drawings.

It seemed that with the closure of these projects, with the attempts of combat use of An-2, it was finished forever. But all the same it was necessary to make war on the Kukuruznik, moreover, the peaceful biplanes of An-2, which were completely unsuitable for these purposes, fought.

The first reliably known combat use of An-2 occurred in Hungary in the 1956 year. During the suppression of the An-2 uprising, they were used to scatter leaflets over the insurgent detachments, as well as for visual reconnaissance, and they often came under fire from the enemy.

An-2 was used in the war in Indochina. Aircraft An-2 Air Force DRV (Democratic Republic of Vietnam) made its first combat flights to Laos, where in 1960-62 years. there was a civil war. The Vietnamese "Cornplanes" delivered to their allies, the Pathet Lao detachments and left neutralists, equipment, ammunition and weapon. Around the same time, An-2 was also used to supply the Viet Cong. 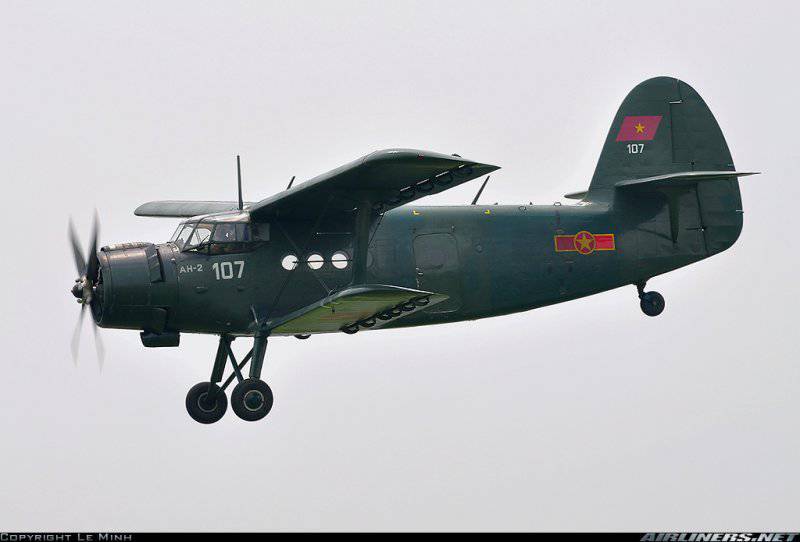 There is a case in which the Vietnamese Air Force An-2 unit in a night combat departure sank the warship of the Navy of South Vietnam (a corvette or frigate according to modern classification) and damaged the landing craft, the attack was carried out using NURS. After that, the Vietnamese An-2, at night, tried to attack warships of the US Navy shelling the coast. These attempts were unsuccessful, at least one An-2 was shot down by the missiles.

An-2 was successfully used to combat sabotage and reconnaissance junk and armed boats. 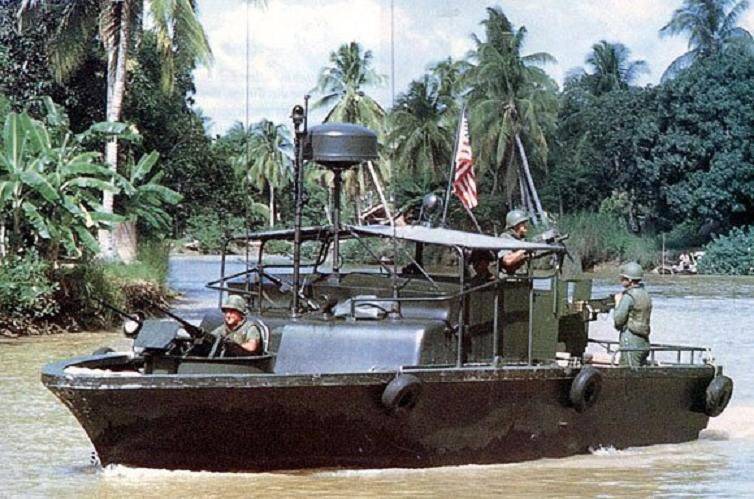 For this, they were equipped with one or two machine guns in the doorway (“Ganship” in Vietnamese) and holders for small bombs. The success of An-2 in this role was repeatedly highlighted in the press of that time. 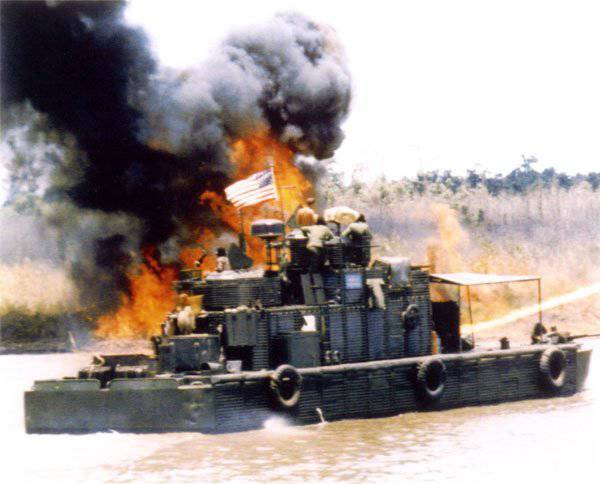 The planes were used by the Vietnamese for action on ground targets. But during the bombing of American bases, they were quite often shot down.

In Cambodia, in 1970, the An-2 was used by government forces in battles with partisans as transport aircraft. In 1979, again in Cambodia, An-2 took part in the fight this time against the Khmer Rouge units. In addition to transportation, they were used as advanced aircraft manufacturers. The crews, finding the targets, “processed” them with NURSs, bombs or simply hand grenades with white phosphorus, which, when burned, produced thick white smoke, which served as a guide for attack aircraft. Interestingly, the F-5 captured F-37 was used for airstrikes and the American-made A-XNUMX attack aircraft were suitable for this purpose like no other.

After the conclusion of a truce in the Korean War, it continued on the "invisible front." The North Korean Air Force used An-2 in covert operations against South Korea. These biplanes could fly low enough and slowly to go unnoticed. From the DPRK side, Antonov biplanes of Soviet and Chinese production were actively used for throwing and evacuating sabotage and reconnaissance groups. In South Korea, the North Korean agents prepared secret runways, which the An-2 should have landed at night. 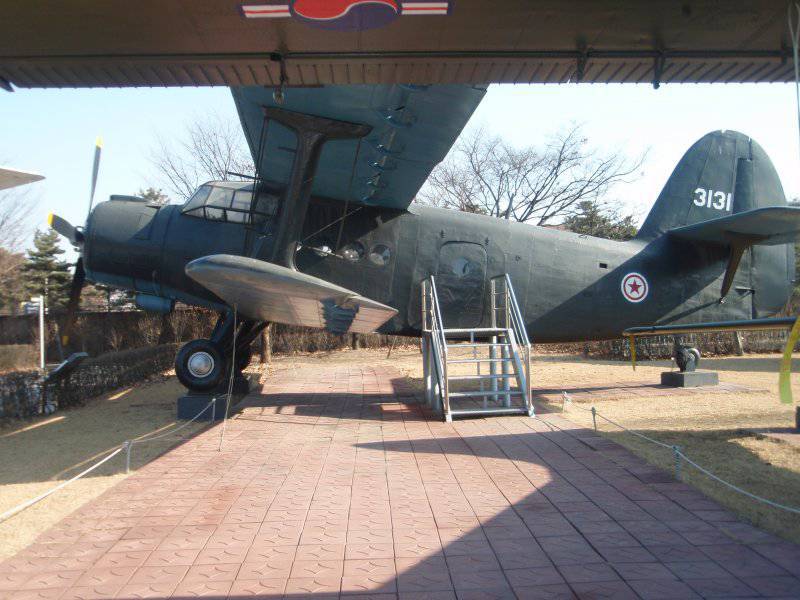 At the Military Museum in Seoul, An-2 captured by South Korean intelligence services is demonstrated.

I had to "smell the powder" An-2 and in Nicaragua. According to eyewitnesses, the Sandinista dismantled agricultural equipment on several machines, and in return, under the lower wing and fuselage, they installed three bomb racks for 100-kg bombs. In this form, the aircraft made several sorties against the detachments supported by the CIA "Contras".

The vast field of combat activity for the An-2 was the former Yugoslavia, and in the first place - Croatia. After the collapse of the SFRY aviation went to the Serbs. Wanting to somehow change the situation, the Croats adapted for military purposes literally everything that could fly into the air. So, on the basis of the agricultural detachment of Osijek, a unit was created that was armed with about a dozen An-2. This detachment worked well in the battles for Vukovar, where the Anes were used for transportation and night bombing. Bombs, usually home-made, were loaded into the fuselage and thrown through an open door. Such attacks inflicted moral damage on the enemy, but nevertheless a case was noted when such a bomb destroyed the dugout in which the Serbian headquarters was located.

From 3 November to 2 December 1991, the Croatian "twos" made 68 night raids. Thanks to their excellent maneuverability, they managed to escape from the attacks of the fighters of the Yugoslav People’s Army (JNA), and because of their low infrared visibility they avoided the hitting of MANPADS missiles. There is a case when at night, before knocking down the Croatian An-2, the Serbs launched 16 (!) Missiles on it. In total, during the battles near Vukovar, the Croatian side admitted at least five An-2 losses on the ground and in the air. The circumstances of the death of two of them are known: one was shot down by the Kvadrat SAM missile system (SAM-6 according to the Western classification), the other by anti-aircraft artillery. There is information about other losses of the Croatian An-2: September 8. The fighter-bomber of the JNA Ora air force, storming the airfield of Osijek, destroyed one aircraft of the 57-mm NURS. September 15 Serbian aircraft destroyed on the ground a few more “twos”.

In addition to actions against military installations, the Croats used Ana several times in raids on columns of Serbian refugees, which is a war crime. And one An-2, repainted for quick identification in red, was used for courier flights, including to Italy, from one of the airfields of the Istrian peninsula.

At the beginning of 1992, the fighting in Croatia stopped, but as a result, the unrecognized Republic of Serbian Krajina appeared on its territory. In January-February, 1993, the Croatian troops conducted an operation, trying to eliminate it. During the fights, aviation was used, including An-2, which bombed enemy positions and important targets. One of them was shot down during a raid on the oilfield near the village of Dzheletovitsi. The crew managed to make an emergency landing, but, trying to leave, the pilots got into a minefield and died.
In 1992 the fighting took place on the territory of the former Federal Republic of Bosnia and Herzegovina, where all the warring parties actively engaged aviation. Croats continued to use the An-2 and July 2 lost one plane from the air defense fire. The Bosnian Serbs, having taken over all the techniques of the local flying clubs, used the An-2 as reconnaissance aircraft and light attack aircraft. When Muslims bombed positions near Srebrenica in March 1993, one of their planes was shot down. At the end of 1992,
after the ultimatum of the NATO countries, the conflicting parties stopped using
combat aircraft. Nevertheless, the Croatian Ana continue to fly to Bosnia, carrying various cargoes, evacuating the wounded, etc.

Unfortunately, An-2 "noted" in conflicts on the territory of the former USSR. Thus, during the long-term war in Nagorno-Karabakh, the Armenian and Azerbaijani Anas are used to deliver military cargo to the war zone and remove the wounded from there, and at first the refugees.


According to the press, at least one Armenian An was shot down. There were An-2 and at the disposal of General Dudayev. They were used for flights to Georgia and in internal squabbles, but they did not take part in the battles with the Russian army, since at the beginning of December 1994, the Russian aircraft destroyed them at home based airfields.