“The US still has a chance” 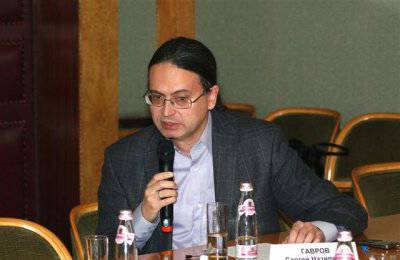 The former US Secretary of State, Hillary Clinton, once spoke out against the unification of Eurasia around Russia, even in completely civilized, economic forms: “We are thinking about how to prevent this.” We are grateful for these explanations as a reason to reflect on the currently unused possibilities of the geopolitical dialogue with the United States and our Eurasian integration. To think asymmetrically, not at all in the spirit of the Cuban missile crisis or the Bulava of Russia's strategic nuclear forces. There is a “mace” on submarine rocket carriers, and thank God, this is a good final argument for the American elite, potentially cooling its zeal in applying the “Magnitsky lists” and in counteracting our Eurasian integration.

Today we should think about the intersection of Russian and American interests in Europe and Asia. We can, for example, go on an ever-closer alliance with China, and the timing of America’s geopolitical localization and the globalization of China depend on our position. So, Americans should seriously think about what to offer Russia in exchange for a more restrained position with respect to China.

In recent decades, our position in Europe has seriously changed. It is quite common to say that at the end of 80, the beginning of 90, Russia moved from the club of winners to the club of those defeated in world wars. A lost world war is always accompanied by the loss of territory and population. The more these losses, the bigger was the lost war. For Russia, the loss in the world cold war cost more than a third of the territory and population. During the twentieth century, the country loses not only the Kingdom of Poland and Finland, but gets the western border along the line September-October 1941, in 400 kilometers from Moscow. For incomplete 100 years, we lost territories, the allocation of which from the Russian Empire could not be thought of by the most ardent revolutionaries and ethnic separatists.

But if someone in the American elite decided that it was forever, then this is a debatable issue, as is the fact that our defeat in the Cold War is beneficial to the US in the medium term historical run. Indeed, the geopolitical victory of the United States over the USSR made Russia and Germany defeated in 1945 potential allies, unfortunately losing the world wars, objectively forced to solve similar historical problems.

While Germany is sleeping, lulled by the infantilism of the young generation, decades of economic growth and millions of carnival gay parades. But nothing lasts forever, and public anesthesia after the horrors of World War II should gradually pass. It will not take much time, and Germany will wake up.

20 years ago, Germany was reunited, assessed by M. Thatcher's "great friend" of Russia as a great danger to the West. In March 1990, she urged France to join forces in the face of the new “German threat”, two months before the fall of the Berlin Wall, telling Mikhail Gorbachev that the West does not want Germany to unite: “We do not need a united Germany, this will lead to a change in the post-war borders, we cannot allow it, since such a turn of events will undermine the stability of the entire international situation and endanger our security. ” But if the restoration of the unity of Germany presents an obvious danger to the West, then does this not mean just as obvious benefit to Russia?

If this is so, it is important to promote the rise of Germany, to strengthen economic and political relations with Berlin, being more attentive to the historical grievances of the Germans. We remember that the associations of Sudeten Germans, other unions of forced repatriates were the worst enemies of the USSR. Of course, they claimed the return of the western regions of Poland, the Sudetenland region of Czechoslovakia. Today, these previously odious structures and requirements look somewhat different. Czechoslovakia is simply no longer. Poland last betrayed us in the era of Solidarity, later leaving for NATO, providing its territory for the deployment of a strategic missile defense system. Today we do not bear moral obligations to the Poles, the return of which is possible only in the case of the voluntary return of Warsaw to the integrated Eurasian space. If this does not happen, we will be able to treat with great understanding the interests of the former “East Germans” (Volksdeutsche), who retained a strong memory of the deportations of 1945 – 1946.

We in Russia sincerely and to the last opportunity held on to the principles of the post-war structure of Europe and their legal foundations. This is not our choice, we wanted to leave everything intact, but the West has practically destroyed the post-war structure of the world. Since the end of the 80-s at the initiative of the West, the Yalta and Potsdam agreements have undergone a cardinal revision, we have lost the geopolitical results of the Second World War in Eastern Europe. Now, “B” can be followed by “B”, the return of Germany to world politics. Already today, the National Bank of Germany is returning gold reserves from London and Paris, then it will be the turn to return German gold and from Fort Knox. Worldwide headlines on German topics today can often be summarized as “2013 will be an important year for the restoration of Germany’s state sovereignty.” We waited patiently and waited: we took the Russian army out of Germany, together with Gerhard Schroeder we built the Nord Stream, in every possible way strengthened economic cooperation, considering in one or two moves the possibility of creating a Russian-German strategic alliance.

So, we have something to answer the United States in Europe. But we are not at all seduced by anti-Americanism, much less fantastic, in the spirit of American blockbusters, by the destruction of the United States. From whom will we then buy iPhones and iPads, what will happen to Silicon Valley and NASA, the prospects of thermonuclear engines for the development of the Solar System and the interplanetary advancement of mankind? In the depths of our mysterious Slavic soul, we even love America, sympathize with its African-American President Barack Hussein Obama - almost as much as the country sympathized with John F. Kennedy in 60. This view is entirely in the spirit of the reflections of the classic Russian philosophy Alexander Zinoviev, who wrote about the defeat of the USSR as a great tragedy on a global scale, but noted that the total defeat of the United States and the West in general would represent the same danger to humanity.

Today we do not want a total defeat of the West. We only want the United States not to interfere with the deployment of integration processes in our common home, in Eurasia. Even better, to help us with the Eurasian reorientation of Ukraine, Poland, the Baltic countries, Eastern Europe in general, as it was at the end of the Second World War. Then our attitude to America’s potential geopolitical rivals will become more restrained. In other words, we choose allies based on their usefulness in solving our historical problems, and the United States still has a chance to be one of them. When pursuing a sensible policy, of course.

Ctrl Enter
Noticed oshЫbku Highlight text and press. Ctrl + Enter
We are
Military reform as an integral part of the security concept of the Russian Federation: Systematic dynamic assessmentAstana should become the capital of the Eurasian Union: Nazarbayev’s reply to Putin
Military Reviewin Yandex News
Military Reviewin Google News
78 comments
Information
Dear reader, to leave comments on the publication, you must to register.