4 2013 June
39
JSC "Aviation complex named after S.V. Ilyushin ”is going to certify the civilian version of the IL-76MD-90A aircraft, Rossiyskaya Gazeta reports. According to the chief director of the complex Viktor Livanov, civil certification is a necessary condition for increasing the competitiveness of military transport aircraft in the world market. At the same time, the IL-76 is quite well represented in the world. Today, 100 Il-76 aircraft are used abroad, which are operated officially, unofficially about 300 such aircraft fly. So, even if it is possible to replace at least 200 aircraft in the fleet of commercial airlines, it will be good enough for us, said Viktor Livanov. In addition, the enterprise asks for the civil certification of the Ministry of Emergencies of Russia, which carries out work around the globe.


The general director of the company clarified that the work on certification of the civilian version of the aircraft will begin only after everyone is sure that the state defense order for the supply of military transport aircraft IL-76MD-90А will be completed. According to Viktor Livanov, the aviation complex has a lot of important work to do, which is necessary for increasing the competitiveness of the IL-76MD-90А. The company has already made a technical assessment and figured out how difficult it is - yet the “transport worker” was designed more than 40 years ago, during which time the certification requirements have changed significantly. We figured on the company and how much it will cost. At the same time, a search for a circle of potential customers is conducted. Negotiations have already been held with major international airlines that operate in the market of commercial shipments (not only with Russian ones). Livanov believes that the certification of the aircraft, the company will be able to start no earlier than 2016 year.

At the IL-76: yesterday, today, tomorrow conference, which took place at the Aviastar-SP aircraft factory in Ulyanovsk, a rather important issue was discussed - the strategy for working with suppliers. Certainty in this matter is needed in order to fulfill a fairly extensive state defense order: the airline must assemble 39 IL-76MD-90А for the Russian Defense Ministry (and in the future - more than 100 aircraft up to 2020 of the year). Today it is the largest contract in the world for the number of heavy transport aircraft supplied. 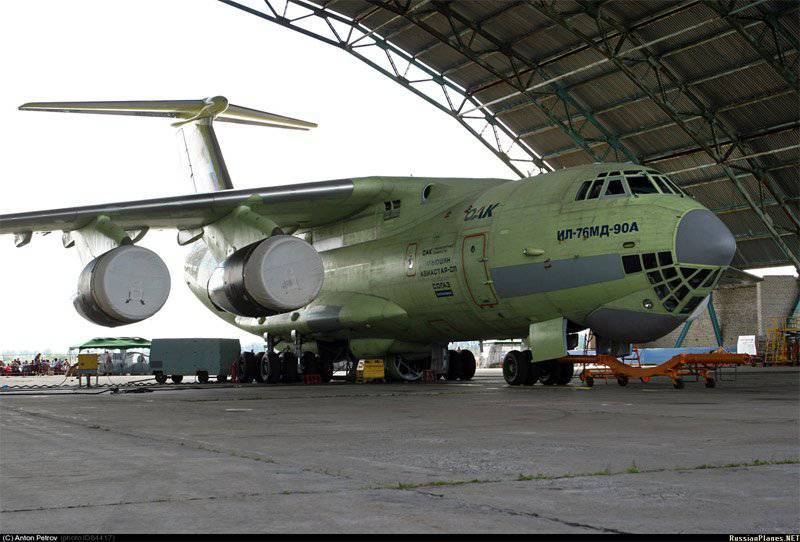 At the conference, Deputy Director for Procurement of JSC UAC - Transport Airplanes, Alexander Konorev noted that today work is underway to create a pool of suppliers who would become partners of the enterprise for many years and understand the specifics of government contracts. Unlike other state defense orders, the price was set by the RF Ministry of Defense directives, the military department does not compensate for the costs of preparation and resumption of production, the credit load is about 15%. Therefore, there is such a situation in which the performer of this contract has a negative level of profitability.

The terms of the contract with the Russian Ministry of Defense are rather complicated: under the contract, the sale price of transport aircraft is 18% lower than their cost price. The direct loss of the KLA from their sale will be of the order of 600 million rubles per one delivered plane. On top of that, the military is going to pay for the planes later on 3 after the delivery of the aircraft - that is, in 2017. And this means that corporations, in any case, will have to raise credit funds. In order to at least somehow smooth out this situation and make the car competitive in the market, suppliers were asked to “moderate their appetite” and lay 15-1% instead of traditional 2% profitability. Losses promised to compensate for participation in other major projects of the KLA.

According to Konorev, suppliers who agree on these working conditions for the IL-476 project will receive a large number of opportunities. They are promised great prospects, not commensurate with the amount of discount, which now requires an aircraft manufacturing corporation. First of all, they receive a long-term contract for 39 aircraft in the framework of the Russian state defense order. In the event that another contract is concluded at the Ministry of Defense, they will be able to get an option to supply components for Il-76 transport aircraft and tankers based on them. 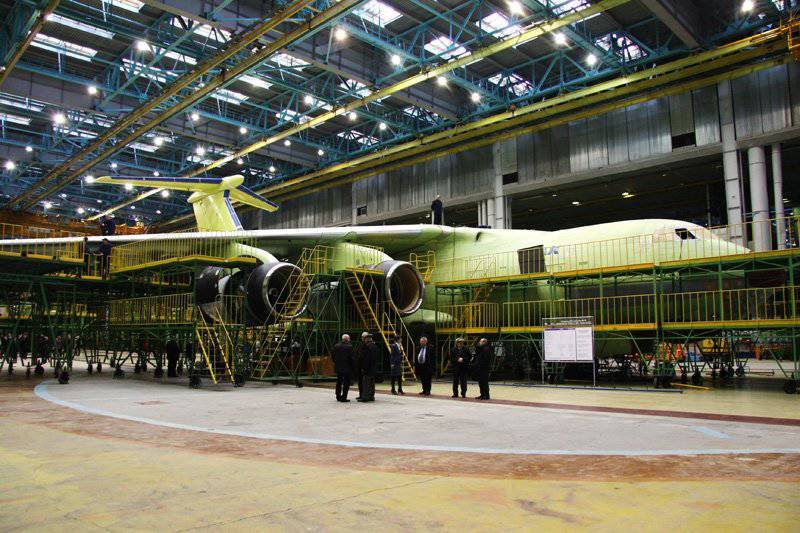 In addition, suppliers are offered to take part in another project of JSC UAC - the release of the MTA (multi-purpose transport aircraft), as well as in 2's, which are still potential projects for the production of An-124 and IL-112. The corporation is also ready to cooperate on the project “Superjet-100” and localize the production of foreign components in Russia. When the MS-21 Russian passenger aircraft is launched into the series, they will also be able to receive orders automatically. By the way, one of the loyal component suppliers for IL-76МД-90А has already created a joint venture with a foreign partner, which is a participant of the MC-21 project. Officially, this will be announced this summer at the Le Bourget Air Show.

At this point in time, OAK-TS has already selected 42 suppliers (among them are 3 large holding companies) with which negotiations are being held. At the same time, there are those companies that did not enter the position and refused the conditions proposed by the corporation. They are expected to conclude a contract for the 1-2 of the year (this is the 3-5 release of product kits); at the same time, the customer begins to offer their product range to other suppliers. Partners who have refused the terms of the KLA will be included in the “black list”: participation in other projects of the corporation will be impossible for them. As Alexander Konorev specified, it is planned to carry out an audit for all current projects: disloyal suppliers are planned to replace more loyal ones with those who are able to provide a competitive price level. Examples of the implementation of this decision in practice already exist. The President of the KLA recently signed an order to suspend all new projects and R & D work with one of the disloyal component suppliers who were involved in the production of hydraulic system elements.

The new military transport aircraft IL-76MD-90 was created on the basis of the mass-produced military transport aircraft IL-76MD, which is intended for parachute and landing landing of military equipment, personnel and all kinds of cargo. On this plane more economical and powerful PS-90А-76 engines were mounted, which meet the requirements of ICAO (ICAO) for the emission of harmful substances, as well as the noise level. Their use on the 33% increases the thrust-to-weight ratio of the aircraft, and their reliability is higher immediately in 1,5-2 times. The installation of new Perm engines allowed to significantly increase the economic efficiency of the machine due to: 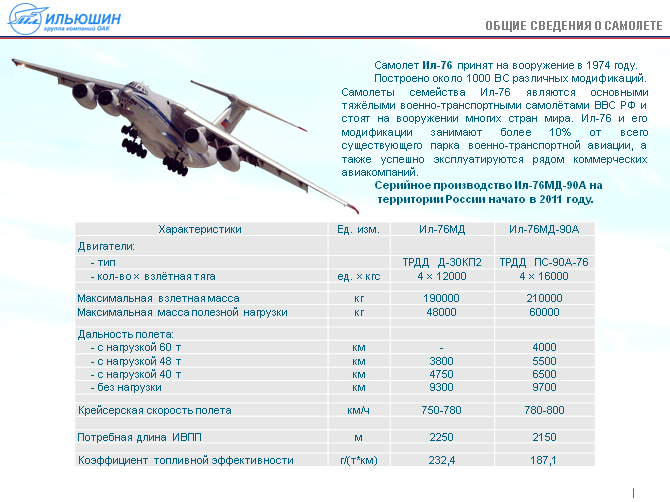 -increase 18% range;
- reduction of cruising specific fuel consumption by 12%;
-reduction of direct operating costs;
- increase of the transported commercial load during operation at elevated outdoor temperature and in conditions of high-altitude airfields.

The IL-76MD-90А aircraft has the following advantages over its predecessor the IL-76MD:

25% increase in maximum payload.
35% increase in the 40 transportation distance of tons of payload (average weight of goods transported).
Increased fuel efficiency by 17%.
Flight operations (landing) in category II of the ICAO and compliance with the requirements of the ICAO on the accuracy of navigation and safety.
4 certification for ICAO chapter noise and emissions.
The new PNPK ensured the introduction of KSNEI, an increase in 5 times the performance of the computing environment, an increase in the bandwidth of information exchange channels by 70 times, and an increase in accuracy of navigation several times.
The new digital programmable communication complex ensures the organization and maintenance in automatic mode with guaranteed quality of telephone radio communication, automatic data exchange with aircraft, ground and air control panels and gearboxes in a theater of military operations.
A new defense complex has been applied, increasing the survivability and combat effectiveness of the aircraft in accordance with customer requirements.
Improved cockpit ergonomics and modern requirements for habitat and crew performance.
Implemented measures for continuous embedded information support of the product life cycle, which allows for the maintenance of the entire aircraft in the system - “by state”. 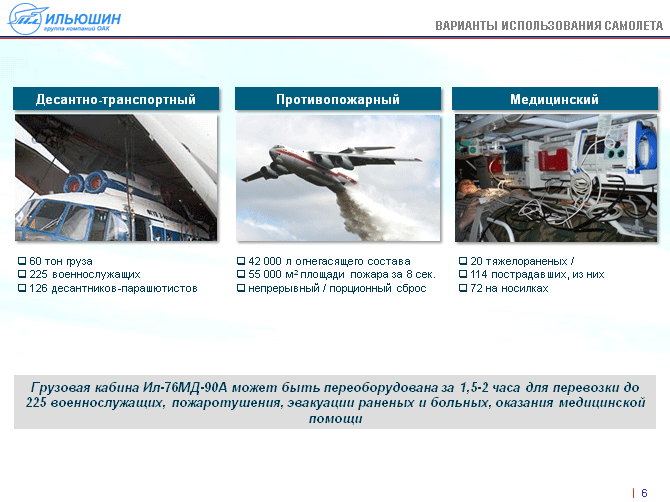 The main structural differences from IL-76MD

The new IL-76MD-90А, also known as IL-476, received a new modified wing, PS-90А-76 engines, an upgraded chassis and new avionics. At the same time, the use of a new wing using long caisson panels made it possible to increase the maximum take-off weight of the aircraft by 10,5%, and in the variant of the tanker aircraft by 15,5%, while the maximum payload increased by 25%. At the same time, the use of new engines had a positive effect on increasing the reliability and fuel efficiency of the car. Modernization of the IL-76 chassis and braking system provides aircraft operation with a maximum take-off weight of 210 tons, and new wheels with brakes of increased power capacity provide operation with a maximum landing weight of 170 tons.

The new fuel system of the aircraft provides a more complete production of fuel, and also increases the safety of the flight due to the introduction of the regime of urgent fuel drain during emergencies. Modernization of the power supply system of the aircraft allowed increasing the total power supply capacity by 40% and combat survivability by 30%. The new auxiliary installation allowed 1,5 to increase the height of the launch times, the time of continuous operation increased 5 times, fuel consumption decreased. 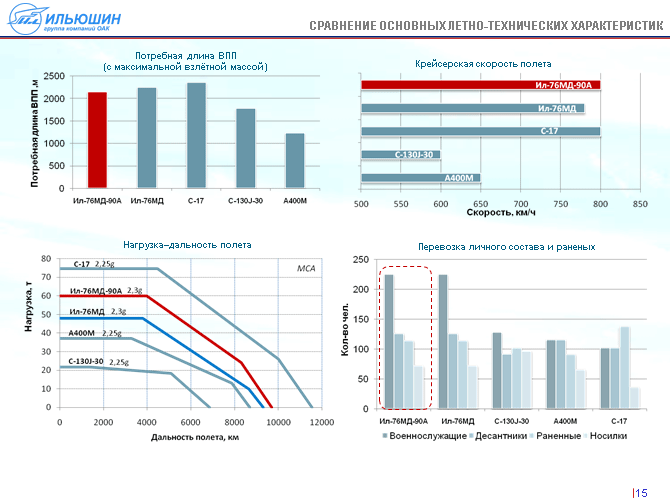 At this point in time, approximately 30% of the global market for ramp transport airplanes are domestically produced aircraft, developed and delivered during the time of the USSR. At the same time, over the past 20 years, deliveries of Russian transport aircraft have been of a single character. At the same time, according to experts, the global market of military transport aviation remains fairly stable, and its volumes are estimated at about 5-6 billion dollars annually - about the order of 80-90 aircraft of various classes. The main competitors of IL-76МД-90А in the international arena today are Airbus А400М, Lockheed С-130 Hercules and С-17 (the plane of the American company "Boeing", whose production is scheduled to stop in 2014-15 years because of the high price).