4 2013 June
6
Mi-10 (according to NATO codification Harke) is a military transport helicopter, a flying crane, which is a further development of the Mi-6. The machine was developed in 1961-1964 and adopted by the 1963 year. Serially produced at the Rostov helicopter plant. Over time, a civilian version of the helicopter, the Mi-10K, was developed, optimized for various construction and installation works.


To proceed to the design of the "flying crane" based on the Mi-6, the Soviet government ordered 20 February 1958 of the year. The task envisaged the creation of a helicopter with a carrying capacity of 12 tons with a flight range of up to 250 km and a maximum carrying capacity of 15 tons (when transporting goods over short distances). In the process of creating a technical project was supplemented by the requirement for the transportation of ballistic and cruise missiles, which became the main task of the Mi-10. The helicopter retained the control circuit and power plant of the Mi-6, while the designers replaced the fuselage of the car with a new one, narrower and lower, into which, nevertheless, the compartment had a total length of 15,95 meter, which could be used to transport 28 passengers or various cargoes. During ferry flights, additional fuel tanks could be installed here.

In order for all the wheels at the same time to take off from the ground, the right landing gear were made 300 mm shorter than the left, and the minimum clearance of the car was 3,75 m. In total, the 2 provided for cargo transportation outside the fuselage of the helicopter: cargo installed on a cargo platform installed between landing gear and standard cargo rigidly held by hydraulic grip (containers with rockets). 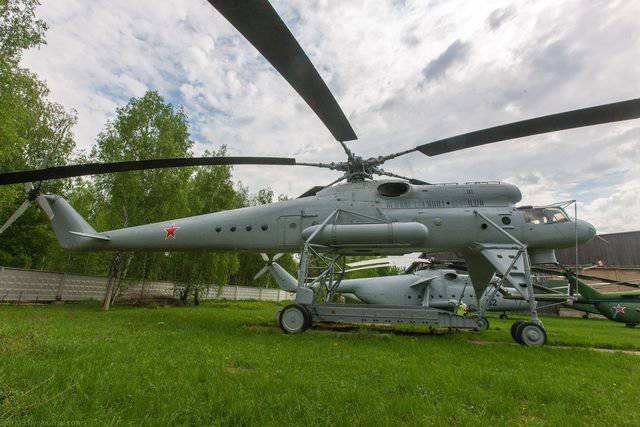 In the process of testing the helicopter, the military abandoned the idea of ​​transporting missiles, and the project was on the verge of closure. The serial production, which began in 1964, amounted to the entire helicopter 24. At the same time, the helicopter did not find widespread use, since fixing the load with hydraulic claws required the installation of counter-assemblies on the transported loads.

More successful was the fate of the civilian version. The Mi-10K helicopter, created for construction and installation works, was mass-produced from the 1975 of the year (1975 helicopters were launched in 76-17 years, 4 was converted from the base Mi-10). When creating the Mi-10K, the designers completely abandoned the hydraulic grips and the external platform, and also reduced the chassis height, which led to a decrease in drag and weight of the vehicle. Instead of the camera system that did not justify itself, used to control the flying crane during loading and unloading operations, the Mi-10K was equipped with a second, suspended cockpit, which had all-round visibility and a third set of control levers.

The main task of the Mi-10 helicopter was to transport cargo that did not fit into the Mi-6. In the course of combat training, including during large-scale exercises, helicopter crews practiced transportation using a platform of various types of military equipment: armored personnel carriers, reconnaissance and patrol vehicles, trucks, mobile radio stations, etc. Sometimes such helicopters were used to assist civilian authorities, for example, 112 AFP crews were engaged in transportation of power lines. 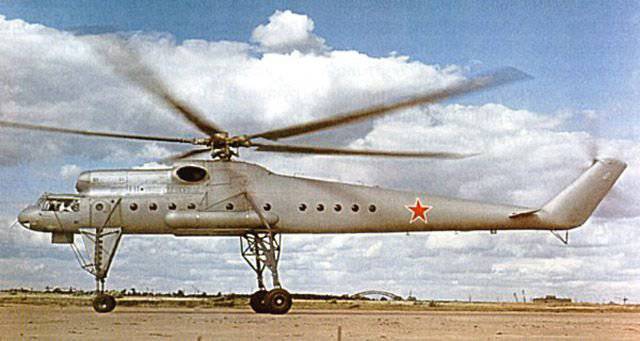 Thanks to the extensive use of Mi-6 units, the design of the B-10 helicopter was completed in 1959. By the summer of 1960, the first helicopter was ready. Just before the start of the flight test the machine received the designation Mi-10. On this helicopter, one wheel was mounted on all the landing gear supports, while the front wheels were self-guided, and there was also no emergency escape shaft. The Mi-10 helicopter first flew 15 June 1960 of the year, it was controlled by test pilot RI Kaprelin. In the future, during the factory tests, the Mi-10 was mainly piloted by B.V. Zemskov and G.V. Alferov.

Tests flying crane were quite successful. Already in the 4 flight, the Mi-10 helicopter safely flew 3000 km long, made several landings for refueling. Milevskie pilots established the capabilities of the machine for the transportation of different equipment, and to determine its flight performance when transporting large loads on the platform, flights were carried out with a special container. In parallel with this, the TsAGI passed statistical tests of the helicopter.

On July 9, 1961, the Mi-10 helicopter was first shown in public during an air parade in honor of Air Day Fleet THE USSR. Then the helicopter delivered to the guest stands of the Tushino airfield a house of the geological party, in which a retail outlet was opened. On September 23 of the same year, the crew under the control of Zemskov set an absolute world record for carrying capacity by helicopter. A load of 2200 kg was lifted to a height of 15103 meters. On the same day, the crew under the control of Alferov lifted a cargo weighing 15 tons to a height of 2326 meters. 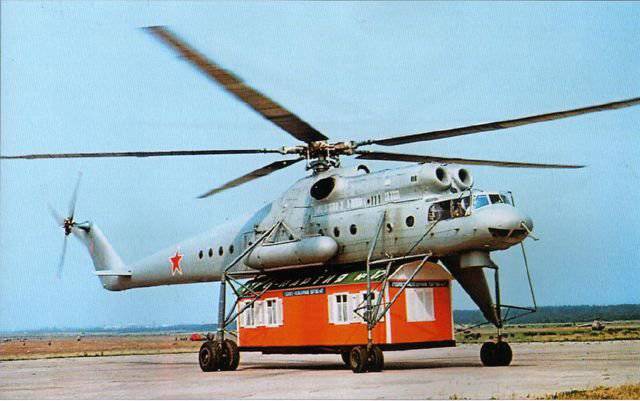 In the course of the state tests, the transportation of various cargoes with the use of the entire arsenal of Mi-10 special equipment was worked out. For example, transportation was carried out on the platform of buses, cars, tankers, who drove into it on their own. Also on the platform were transported railway containers and other non-self-propelled objects, which were dragged onto it with the aid of a side winch. At the same time, bulky cargo in flight created significant aerodynamic drag. At the final stage of state tests, the landing screw was executed in the mode of self-rotation of the rotor. The tests of the helicopter were conducted quite intensively and were completed on the whole at the beginning of 1964 of the year - ahead of schedule.

In general, we can note the fact that according to the results of state tests, the Mi-10 helicopter received a positive assessment. During the tests, its ability to transport loads of up to 15 tonnes with dimensions 5x5, 20x3 m (with a cross-shaped form of cargo up to 10m) was confirmed both on the platform and in hydraulic grips. In this case, the helicopter testers revealed a number of shortcomings. The main problem was a significant level of vibration, which was particularly noticeable at low flight speeds. Sounded and other claims. In particular, it was found that it is good to observe only the load buildup during the flight on a cable suspension system mounted on the “TV” mounted in the cockpit. At the same time, when working on the ground and with loads on hovering, it was ineffective. For this reason, in order to see at least something under the car, the pilot had to lean out of the window almost to the waist.

Due to the very high chassis, the cockpit was located at the level of the 3-th floor, from where a very good view was opened. But when landing and taking off in an airplane, the helicopter began to sway threateningly on its huge "stilts." At the same time, the suspension of goods using hydraulic claws required a significant investment of time and proved to be a very inconvenient operation. It did not arouse enthusiasm among the military and the need to equip a wide range of equipment and special containers with response nodes for hydraulic claws. 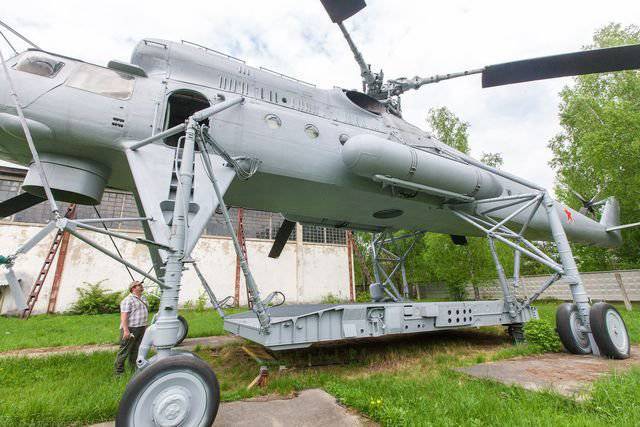 In 1965, the helicopter was first demonstrated to the world community. The Soviet government decided to show the car at the XXVI aerospace show in Le Bourget, where about 350 various exhibits gathered, including 24 vertical take-off machines. The Soviet Mi-6 and Mi-10 along with the heavy An-22 transport aircraft became the main "stars" of this air show. During the demonstration flights, the Mi-10 helicopter transported the LAZ bus without any particular problems, and during the statistical demonstration, a film pavilion was mounted on the helicopter platform, in which documentaries about the Soviet helicopter industry were shown.

The Mi-10 is a classic single-rotor helicopter with a tail rotor, four-bearing chassis and a GTN 2. The fuselage of the helicopter is a fully metal, variable cross-section semi-monocoque design, with a flat bottom. The fuselage includes the nose and central parts, tail and end beams. The nose of the fuselage accommodates the cockpit with improved visibility down. In the central part there is an entrance platform and a cargo cabin, from the starboard side of which a cargo door is located, as well as an electric winch with a load capacity of 200 kg. The helicopter cabin can accommodate up to 3 tons of cargo or 28 passengers.

The rotor of the helicopter is five-bladed, its diameter is 35 meters, the rotor blades are all-metal and have a rectangular shape. They are equipped with a spar damage warning device and an electric anti-icing system. The tail screw is four-bladed, with a diameter of 6,3 meter. Its blades have a trapezoidal shape and variable thickness. The blades of the tail rotor are wooden, made of delta-wood, have a steel tip and a sock forging, and are equipped with an anti-icing system. 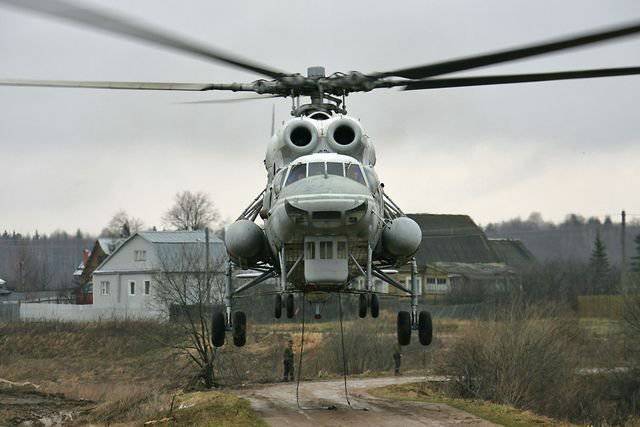 The power plant of the helicopter includes the 2 gas turbine engine (GTE) D-25V design PA Solovyov. Their power is 4045 kW / 5500 hp The engines are mounted above the cargo compartment and can operate independently of each other, which allows the vehicle to fly with one engine running. Both engines are equipped with autonomous oil systems with oil cooler and oil tank. The auxiliary power unit AI-8 is located in the entrance platform of the helicopter.

The helicopter Mi-10K was used four-bearing non-retractable truss type chassis with twin wheels and oil-air shock absorbers. The front landing gear were equipped with a lever wheel suspension, the fuselage clearance was 1,65 meter. On the tail boom was installed truss safety support. The Mi-10 fuel system consisted of 3-x fuel tanks: 2 of them with a total capacity of 9000 liters were installed on the sides of the fuselage in front of the main landing gear, the third - the supply tank was behind the main gearbox. On the floor of the cargo compartment it was possible to install up to 4-x additional tanks, in this case, the total amount of fuel reached 11660 liters.

The scheduled performance of the Mi-10: