Who will free us from the hatred of the "liberated by Gorbachev"? 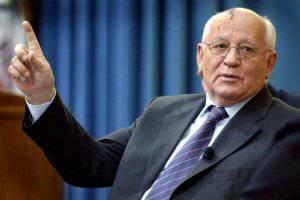 In ancient times, the inhabitants of the Russian Empire had such a custom - to challenge a duel with categorical disagreements.


Fortunately, the militant representatives of the liberal public, there are no hints of at least some minimal grandeur (in terms of territories, no more) today, so we can limit ourselves to just a verbal skirmish. And thanks for that.

Sometimes it is surprising that some representatives of the new generation with such categorical hatred relate to everything that they associate with the Soviet Union; there is a suspicion that once the object of their hatred "for the whole Soviet" will be simple working tools - a hammer and a sickle. However, forgive me such freedom, I forgot that the hands of today's liberals were not created for work, the blood from labor callosities did not flow on their palms - they are creative intelligentsia, and not some kind of mobile.

It is possible that Gorbachev would still be sitting on the throne, until now, like, as you say, the "North Korean leader." Only you would be the first to pour hot tears on your eternal topic regarding the “irremovability of power” - of course, if you had the right to vote at all and did not whisper shod about the apartments and the small rooms. And on the throne, by the way, Gorbachev sits quite often. Only already at their Western friends, who constantly and in a big way arrange birthdays for him and invite a lot of Western stars, who, in turn, pronounce laudatory odes in honor of the “Great Reformer”. By the way, is it not they who paint on their stomachs during their performances “Free Pussy Riot”?

It is also strange that there is a thought that speaks of some kind of "the liberation by Gorbachev of Europe". Probably, the concept of freedom has perverted today among people, and it is not surprising: freedom today is the right to dance in churches and march at gay parades. But I dare to remind you: if anyone already liberated Europe - and not half, but all entirely - it is Stalin hated by all liberals, along with the multi-million army of the dead - those who lie under the ground, those who truly fought for it in order to be free, and those with contempt today dare to suspect the "occupation" of the very "freedom-loving". No, no, you are not "children of the Gorbachev era."

I myself am so, I communicated with hundreds, thousands of the same: they do not have in their eyes the hatred that fills your souls, and which, like a cheesy virus in winter, is transmitted to you incomprehensibly from whom. Children of the Gorbachev era remember their childhood very well - the years when their parents had to spend a penny on a dime; the years when, instead of fighting smiling boys, on the streets of cities there appeared grimy homeless children hiding their faces in the collars of their coats, under which they had bags filled with “Moment” glue; years when the leader of a great nation (however, a leader?) made his citizens blush with shame for him, dancing the Sverdlovsk drunkard and causing hysterical laughter from the American president. No, you are not the children of the Gorbachev era: that generation is the last generation, romantics who believe in justice and fairness and dream of becoming hockey players and cosmonauts, and not businessmen and officials.

It is not surprising that you constantly write the word “Motherland” with a small letter. You probably don’t have it either: it’s not in vain in your liberal environment that the phrase “it’s time to blame” is key. A person without a Homeland does not have a home, and those who constantly call Russia “Rashka” (Rashka is, in fact, the medieval name of the Serbian principality), it’s not for nothing that they wander abroad looking for happiness, like homeless and wanderers. A person can leave forever, this is his right, but he should have a homeland - otherwise the moral frame of a person collapses into dust, and the person himself begins to degrade: he has nowhere to return.

It is you, the supporters of “liberalism” and “liberal reforms”, the supporters of “maximum freedoms” who have brought the situation to such limits that they themselves now poke everyone around in the face - from their fellow citizens to foreign observers: corruption, human rights violations, the catastrophic problems of drug addiction ... However, one can not remember about the latter: in the end, it is the liberals who are so fond of the saying “Personal freedom ends where the freedom of another begins”, simply saying, “Let a person do what he wants, I have the right to do so as long as I do not interfere. " Such a third-party, passive, absolutely weak-minded point of view led to a total society of indifference, a society of devil-may-care attitude and the erection of the definition of “the particular above the common” to the cult. Then do not be surprised that your children become complete scum, stealing things from home and driving themselves to the grave. This is what you can pass “in the inheritance from Gorbachev's times” - however, let's be frank, we are talking only about the heritage and consequences of those times.

It was also repeatedly pointed out that, they say, “what did all countries run away if everything was so good in the USSR?” And that's why they ran away, dear ones, because your “freedoms” brought the unique ability of a small handful of people to influence the destinies of multimillion states. Again, this is what you are now poking in the face right and left, shouting about the "irremovability of power" and "decision-making by a group of rulers." At the exit from this “gate” it was suddenly discovered that “outside the court” was not at all smooth asphalt and an eternal holiday, but dirt, wind and dust.

Free Latvia is now barely making ends meet, trying to somehow stimulate its citizens to remain in the country and not leave for work in the European Union. A free Ukraine, rapidly flying supposedly into a bright European future, has repeatedly shed tears of disappointment after its “people's elected” pro-European president. Free Estonia is experiencing a catastrophic shortage of funds - such that even the legendary Tallinn chimney sweeps, the pride of the Estonian capital, spit on their craft and also, following the Latvians, leave to sweep the streets of the European Union. Is it your freedom? Is it a release? It seems that if the residents of these countries knew in advance what the outcome of this “going out of the gate” would lead to, they would not leave a living place on the initiators of such a “desire for freedom”.

Do not shame the name of those who shed tears mixed with blood for a better life - let's be honest, if not the sweetest, but worthy. Russia's highest award for the collapse of a dream, for the collapse of the creed of our fathers and mothers, for the collapse of confidence and introduction to confusion, for the ambiguity of the future, which we are trying to put together for a minute, is a natural betrayal.

Therefore, tell your "Mikhail Sergeyevich" - let him put the order on the table, as he once put the party card on the table. More from him nothing is required - the rest, to our regret, he did without us.

Ctrl Enter
Noticed oshЫbku Highlight text and press. Ctrl + Enter
We are
Interview of V. Putin to Channel One and the Associated Press AgencyWhat you didn't want to know about England
Military Reviewin Yandex News
Military Reviewin Google News
161 comment
Information
Dear reader, to leave comments on the publication, you must to register.