4 2013 June
14
Among the variety weapons There have always been popular samples and those about which few people knew. But even the popular weapon in its time could not remain the same after several decades, and most often it was forgotten. Of course, there are exceptions, which are usually revolutionary inventions that turn the whole world of handguns upside down, but not many of them. This article will try to restore justice and get acquainted with the already forgotten, but once quite common pattern of weapons, namely, the pistol of the German gunsmith Theodor Bergman. This gun had many modifications, during which its name changed, but the main essence of the weapon remained unchanged, and the tsiferki in the name and prefixes after the sale and resale of rights could not affect the characteristics of the weapon. 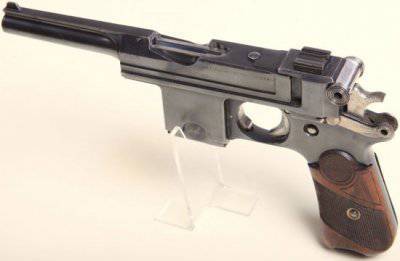 It all started in the 1903 year, it was this year that Theodor Bergman released the first batch of his pistols into the arms market under the name Bergman Mars. These pistols were built according to the scheme of automation with a short stroke of the barrel, or rather, with a short stroke of the receiver, within which the shutter was moving. The barrel is locked when the locking element moves in a vertical plane. So, in the normal position, this locking element is raised up, as it is affected by a protrusion in the frame of the weapon. When the barrel and bolt move backward, this locking element drops and comes out of engagement with the slots in the bolt, which releases the bolt and allows it to move separately from the barrel with the receiver. In order to be able to manually raise the bolt, there were cylindrical protrusions from the back of the receiver. 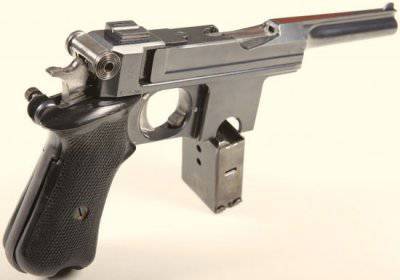 The appearance of the pistol did not stand out in comparison with other samples of that time, however, Mars Bergman had some convenient innovations. First of all, it should be noted a wider handle to hold, which was a definite advantage when using sufficiently powerful ammunition in the weapon. Of considerable importance is the fact that the gun was fed from detachable stores, even if it had a small capacity. By the way, the stores were double-row, so that the same is a useful innovation for short-barreled weapons. But despite this, the main feature of the pistol would be to highlight the ammunition that was used in it.

The cartridge was also developed by a gunsmith, and on 5 years before the pistol itself, that is, the weapon was already built around and under the fully prepared ammunition. Metric designation of the cartridge used in the pistol Bergman Mars 9х23, this cartridge, by the way, is still being produced, although not as in demand as before. The 23 millimeter long sleeve contained a powder charge, which accelerated a bullet weighing 8-9 grams to a speed of 370 meters per second, that is, the kinetic energy of the bullet was more than 550 Joule, which is very good for the pistol cartridge of that time.

In 1905, the pistol and cartridge is adopted by the Spanish army. Bergman, on the other hand, decides not to deal directly with the production and supply of weapons, but resells the contract to a Belgian arms firm that manufactures weapons under the Bayard brand. After that, the weapon changes its name, although no changes are made to the design, after adopting the Spanish army, the pistol becomes known as Bergman Bayard M1908. 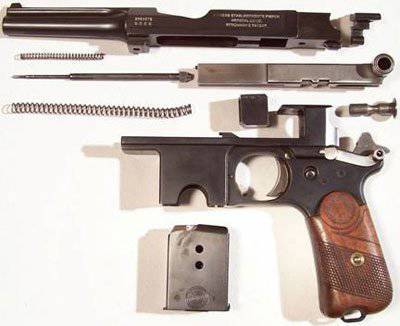 In 1910, Denmark is interested in the gun, which adds cutouts for fingers in the receiver of the stores, for more convenient retrieval of weapons, in this country the weapon is already given the name M1910. In 1914, the production of pistols was minimized, but the further development of the weapon did not stop there. Denmark continued to develop a pistol, in which the Danish designers added a support screw instead of the store lid, and also replaced the wooden lining on the handle with plastic. True, then still returned to the tree. This model has already received the name M1910 / 21. This, unfortunately, was the last modernization (if you can call it that) of weapons.

As you can see, no major innovations in the gun were introduced for almost 20 years, although this was an opportunity to do. At the same time, weapons were actively used by armies of not the most recent countries, which indicates a high reliability and reasonableness of the original weapon design. It is sad, but many modern gunsmiths have something to learn from the masters of the late nineteenth - early twentieth century.