Kyrgyzstan: the third revolution in color?

4 2013 June
42
The most revolutionary country in the post-Soviet space is once again experiencing social tectonics. We are talking about Kyrgyzstan, which over the past 8 years has already experienced a couple of color revolutions. As a result of the first revolution (2005 year), Askar Akayev lost his presidency, and over time, Mr. Bakiyev passed along with his “family contract”, and as a result of the second (2010), Bakiyev was forced to say goodbye to his post, giving him first interim "successor" Roza Otunbayeva, and only then the election results showed that Almazbek Atambayev was the new head of Kyrgyzstan. 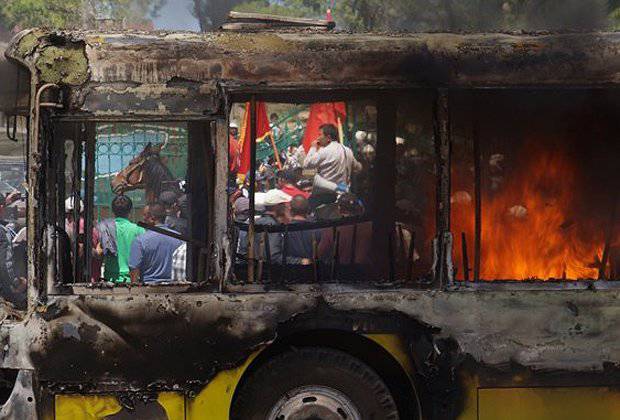 If we evaluate the political processes taking place in the territory of post-Soviet Kyrgyzstan, it turns out that not one of the elected presidents has left his post in a constitutional manner. Both (both Akayev and Bakiyev) were forced to flee the country in the literal sense of the word in order not to become victims of the opposition.

The main source of destabilization in the territory of the Republic of Kyrgyzstan can be considered that the country is far from integrity and respect for the rule of law in its various regions. The division to the "north" and the "south" managed to take shape here quite thoroughly, and as soon as a hotbed of instability arises, it leads to open clashes between separate regions of Kyrgyzstan. The situation is also aggravated by the ethnic differentiation that takes place in Kyrgyzstan, and certain forces are excellent in their use. Overgrown Kyrgyz-Tajik and Kyrgyz-Uzbek contradictions often manifest themselves in those areas of the country where these nations literally live side by side.

The current unrest in Kyrgyzstan initially (at least externally) was not associated with historical claims of the south of Kyrgyzstan to its north. Public thunder boomed in the area of ​​the Kumtor gold deposit, located in the Issyk-Kul region of the country, only fifty kilometers from the border with the People's Republic of China. The deposit itself belongs to the Canadian company Centerra Gold, the state’s share in which is exactly one third. At the same time, it is the Canadian company that is the largest taxpayer to the Kyrgyz treasury. According to some reports, the total budget revenues from the activities of this company and its subsidiaries reach 24% of the total. In 2012 alone, more than 4500 kilograms of gold were mined at the Kumtor mine. The mine employs nearly 2,7 thousand Kyrgyz citizens.

What caused dissatisfaction of mine workers? According to Kyrgyz media, it was originally said that the Canadian owner doesn’t know how to take care of Kyrgyz workers at the mine. These workers in the ultimatum form demanded from the management of the Centerra Gold company that in the settlements located near Kumtor the company built new roads, schools and kindergartens. Representatives of the Canadian company’s management stated that the company complied with all of its obligations to pay taxes to the Kyrgyz budget, hinting that if someone had to build roads and kindergartens in the Jety-Oguz district of Issyk-Kul oblast, then only local authorities with the support of the state government. They say that our business is small - to get products, to sell them and to pay profits in the form of taxes, which, in fact, is written in the contract.

Such a response from the leadership of the Canadian company led to the beginning of the riots. Kumtor employees decided to block the road to the mine, forcing the company's owners to be more accommodating. The Canadian proprietor did not conduct further conversations with the protesters, but sent a letter to the head of the republic, Almazbek Atambayev, in which information on taxes, the need for compliance with agreements and everything else was set out in approximately the same form.

At about the same time, anti-government sentiments began to grow among the protesters. Apparently, the words of the Canadian owners of the mine shares, who first ignored them, nevertheless decided to take into account. Like, and Canadians, maybe they are right. If they pay billions of soms to the state treasury, then why don't the authorities care about improving the living standards of the local population? ..

The reaction crowd thus began to see two goals: the first goal was a Canadian company itself, which, as many Kyrgyz citizens believe, received an 100% stake in the Kumtor deposit as a result of privatization with clearly criminal overtones; The second goal is the authorities who are not ready to use the funds that come to the budget from selling gold from the mine to improve the economic situation, at least in the area where this mine is located. There were heard calls for the nationalization of the mine with the simultaneous denunciation of the agreement with the Canadian Centerra.

The next step of the protesters was the seizure of the Tamga substation and the disconnection of power supply at Kumtor, as a result of which the work at the mine and in the ore processing companies (Centerra’s daughters) was paralyzed. The strengthened outfits of law enforcement officers, who at first did not show much zeal for dispersing the protesters, began to catch up to the scene. The press service of the Ministry of Internal Affairs of Kyrgyzstan reported that the initial correctness (and even outright passivity) of the riot police was associated with a reluctance to aggravate the situation. However, representatives of the opposition movements stated that the internal affairs officers did not disperse the crowd, as the mine workers ’action itself was started by the Kyrgyz authorities, who had also previously stated that Kumtor needed to decide something ... waves of protesters official Bishkek, it is not clear. But another thing is clear: the very Kyrgyz opposition, which announced the “imprint of power” at the mine, decided to take advantage of the situation at Kumtor.

She took advantage of, I must say, in the spirit of the opposition (non-systemic): the first stones flew into the Interior Ministry officers, the bus of the special divisions of the Ministry of Internal Affairs was set on fire with several more police cars. The enraged crowd literally snatched Kyrgyz policemen from the crowd, took away their shields, helmets and rubber sticks. The riot police decided not to remain in debt: stun grenades, rubber bullets, the dispersal of protesters ...

Kyrgyz Prime Minister Satybaldiev arrived at the scene to calm the situation. He promised the rally participants that the authorities are already starting to discuss the issue of revising the contract with a Canadian company and creating a joint gold mining company (50% of the shares for 50% of the shares), which will be registered in Kyrgyzstan. A certain part of the rally participants made the statements of the prime minister cool, but those who had already joined the opposition team were only provoked by Satybaldiev’s appearance and words.

President Atambayev imposed a state of emergency in the riot-ridden Issyk-Kul region and removed the head of the region. Unrest gradually began to decline.

But at the same time, the conflict broke out in the south of the country - the traditional epicenter of the destabilization of the situation in Kyrgyzstan. Opposition forces, which a couple of days ago stated that the rally on Kumtor was sponsored by Bishkek, suddenly decided to declare their solidarity with the rally participants at the mine and even spoke in favor of creating a national “southern government”. Thus, the opposition movements in Kyrgyzstan clearly took advantage of the situation around the mine to achieve their political goals. The people's head of the boiling Jelal-Abad oblast of the republic was appointed a certain Meder Usenov, who, however, a day later the representatives of the country's power structures, let's say, tied under the sanction of the article "Forcible seizure of power or forcible retention of power." This, in turn, led to the fact that the opposition, for whom the situation at Kumtor became a clear gift, continued with their new actions, demanding the release of "political prisoners". The road war was chosen as one of the mechanisms for fighting the official authorities: a crowd instigated by opposition leaders blocked the Bishkek-Osh highway (the only civilized road, say, connecting the northern and southern parts of Kyrgyzstan) in several places.

It is noteworthy that the situation at Kumtor is gradually getting back to normal, but the situation in the south of the country is becoming more and more heated. If we take into account that heroin drug traffic passes through the southern regions of Kyrgyzstan, then the opposition’s desire to get full control over this particular region of Kyrgyzstan in order to have its cash from the transit of the potion, is understandable ... Only here at the same time to hide behind the talk that it (the Kyrgyz opposition) supports "Brothers" on the "Kumtor" - a clear lie. Well, absolutely different goals here. And to achieve them, the population of the south of Kyrgyzstan, where poverty rates are extremely high, is used by certain forces very skillfully - not for the first time, by the way.

Allowing yourself to retreat a little from the Kyrgyz theme, it is worth referring to one Russian analogue. “Military Review” has already published information that in the very heart of the Black Soil Region, in the immediate vicinity of the Khopyorsky Nature Reserve (Voronezh Region), research on nickel mining begins, which (mining) can put an end to both the nature reserve and all Voronezh chernozem. Voronezh residents are determined to defend their land and not let it turn into a desert. But only among the citizens who really stand up for the protection of Voronezh lands, representatives of our valiant non-systemic opposition are increasingly seen at rallies, who are trying to push their slogans, clearly replacing the essence of the protest of the inhabitants of the region and provoking them to open clashes with the police. A region that opposes an environmental catastrophe is trying to turn the overly clever gentlemen into another Russian political “swamp”, spitting on the real interests of local residents.

This is the situation that has manifested itself today in Kyrgyzstan. Began, as they say, for health, continued - for the rest. The economic question was raised to a political degree, which was used by people who pursue completely different goals. Today not everyone remembers in the same Kyrgyz south, because of which the fuss is, and the leaders of the Kyrgyz “swamp” need it - the next grain of chaos has been sown ... It is noteworthy that all this is happening amid talk of denouncing the treaty with the Americans on about the stay of their base in Manas. Coincidence, or another “color” answer to attempts to get closer to Russia? ..