4 2013 June
135
It seems that in the European Union, and more precisely, in that part of it, which is called the eurozone, the state, which is going to settle in the chair of the hegemon, has finally been determined. From the moment Europe was united under the slogans: equality, multiculturalism and democracy, such a desire, sooner or later, should have manifested itself in one of the subjects of integration. It has been shown before, but the relative economic and social welfare of the EU before the crisis did not allow a direct step towards the throne. Today, there is another calico, the very thing for a country that has historically tried to crush the old Europe by itself, but every time something interferes with it and, most importantly, it interferes.


As readers have guessed, we are talking about a country like Germany with its leader in Mrs. Angela Merkel, who has settled in the chancellor's chair. The very Merkel, who entered the world politics with a gray East German mouse, but with time showed obvious ambitions to turn into a more weighty European, excuse me, rodent. Those countries that really believed that the credit manna will be infinite and that the European Union is a territorial formation of equal opportunities (both economic and political) have already felt its sharp teeth. In recent years, the number of such naive romantics has declined. At the same time, the number of those who convicted Germany of unwillingness to build partnerships based on EU legislation, and the desire to use their forces and means to hammer into the brain of “single Europeans” the idea that they are inherently and independently flawed decreased ( without the help of the Big European Brother) cannot send their policies. Gives something historical... 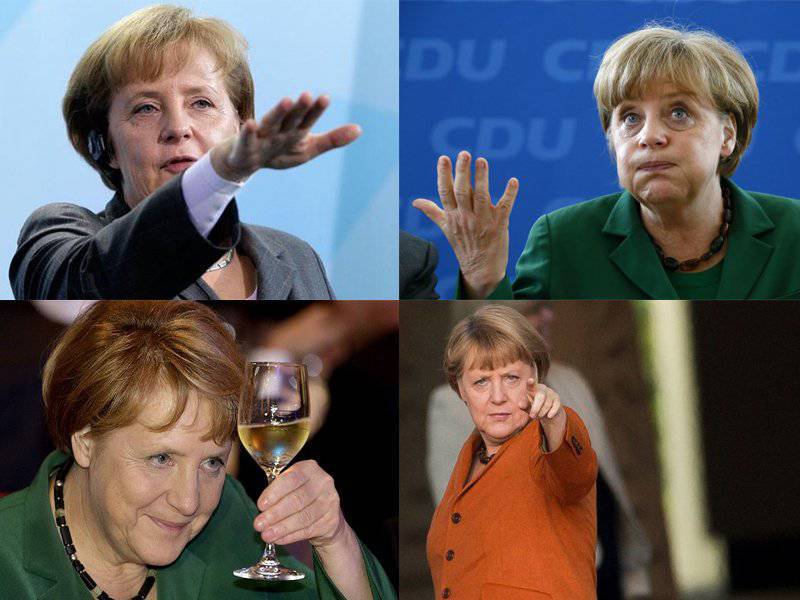 And if at first they got to those members of the eurozone, who perceived the notion “everyday hard work” exclusively through the prism of rich national traditions of rest (well, there are Greeks, Portuguese, Cypriots), then Germany began to gnaw and much more significant players of the European Union. One of these states the other day was France, where Mrs. Merkel arrived to teach the local leadership how to proceed further in order to have a chance to enlist the support of the FRG.

The number of trainees included President Francois Hollande, whom Merkel, using the famous tone of Bush reservations, dubbed Francois Mitterand during a joint press conference. Like, what's the difference, who is standing next ... His task is to take measures, as they say in the eurozone, of economic compliance. This correspondence should consist in the immediate conduct of the French authorities, played with the legislative promotion of the LGBT movement, economic reforms. The fact that these reforms of France are needed here and now, Angela Merkel told Francois Hollande, demonstrating that the German leader today already knows about the situation in the French economy much more than any French leader, including the head of state. France was advised to increase employment by supporting small businesses and reduce payments to various social funds. The last point looks especially Merkelevsky ... Instructions about the need to tighten their belts and pay less attention to social programs are in the spirit of the gracious Angels, who see themselves as the all-European hegemon.

And so that Hollande didn’t think of somehow kicking up, stating that there was no need to teach us here, Merkel reminded him and all the French at the same time that Paris was already hanging on a hook from Berlin. This hook is a two-year postponement to achieve the target 3% budget deficit by the French Republic, which (to postpone) went to official Berlin. How would support the French "brothers", wanting to get some bonuses for it.

After such words, Mr. Hollande, who turned into Mitterrand for a few seconds (maybe it was a psychological move by the Bundeskanzler), had no choice but to confirm France’s lagging behind in economic matters. But in order not to lose his face completely, the French president decided to enter into a kind of controversy with the “teacher”, stating that, despite the fact of the backlog, the French government is aware of what measures to overcome the crisis ... Merkel does not need to answer became, as the fisherman with his catch caught on a hook, there is nothing to talk about, and Hollande doesn’t pull on a “goldfish” for the same Germany ...

On the same day, several French publications, Le Monde among them, stated that Merkel had arrived in France to guarantee herself her own re-election, having built a sort of marshal in a crimson jacket. Like, let Europe see who is now at its helm, and who dictates economic and political fashion to know whose advice to her (Europe) needs to be followed.

True, those who disagree with the policy of Mrs. Merkel, which is based on calls for savings for the eurozone countries with a simultaneous increase in German deposits, are in Germany itself. So at the weekend Frankfurt-am-Main was subjected to attacks, which is the unofficial financial capital of the European Union. It is in Frankfurt that the building of the European Central Bank is located, which has already been dubbed the system of German economic oppression of those countries that are not able to get out of the bondage of Germany. Well, they themselves were pleased with the German credit boot - now we get out ourselves. But Germany is not at all going to raise the boot to give the rest of the eurozone members to catch their breath and start pursuing their own economic policies.

It would seem that Merkel’s position is unshakable - no compromises, no concessions - only to push deeper into the abandoned hooks of our European “partners”. However, as it turned out, there is an interesting power against which even Frau Merkel remains impotent. One of the embodiments of this specific force is such an organization as “The Conference on Jewish Material Claims against Germany” (CJMCaG). This is the “Association of the Jewish Material Claims against Germany”, which since 1951 has been specializing in taking out compensation for the victims of the Holocaust. Today, this organization serves the interests of almost 150 thousands of such victims, third of which provides direct financial assistance with funds received from the state budget of Germany. Well, at least it says it provides ...

The association came up with yet another complaint against the German government, and then signed for giving it more than one billion dollars for a term of 2017 of the year. The total amount of funds allocated by the German governments of different years to the accounts of the association, today can not be called even in the association itself. And will they call it, if the information was recently revealed that the gentlemen who used their official position to put tens of millions of euros allocated by the German authorities into their own pockets worked in it (and, quite possibly, work)?

It is noteworthy that even the facts of the revealed fraud in CJMCaG did not become a serious obstacle to the decision of the German government to allocate such a substantial amount. It seems that against such a force, the toothy Angel is simply powerless. Apparently, this gives rise to a kind of inferiority complex in it: the desire to recoup in Cypriots, stroke Hollande against wool or, for example, support local liberals in their desire to examine the fact of the “legal force of using GDR era symbols in the country and clarifying the assessment of Germany’s role in the 20th century ". Recall that Merkel herself (then also Kasner) under these very “GEDER" symbols has grown ... And where the "refinement of the assessment" will lead - one can only guess. In the Baltic countries and in the west of Ukraine, led to the open encouragement of fascism under the slogans of the struggle for national identity and independence, to an amnesty for the SS punishers and their accomplices. Is Germany next? .. Let's hope that there is still an antidote in Germany.

But only in order to occupy the hegemon's chair all means are good: the main thing is to pry one correctly in order to be able to fuck with others ...

Ctrl Enter
Noticed oshЫbku Highlight text and press. Ctrl + Enter
We are
Results of the week. “Excuse me, aren't you crazy?” - “No. I have a certificate "Results of the week. "Excuse me, did I, too, chapel ...?"
Military Reviewin Yandex News
Military Reviewin Google News
135 comments
Information
Dear reader, to leave comments on the publication, you must to register.