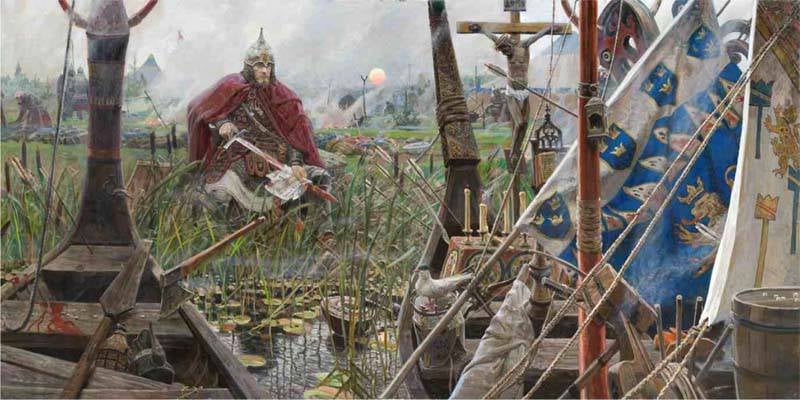 What would we like to see our homeland? Nowadays, the terrible definition about the state of our country is briefly and precisely defined by the words of the famous patriot-colonel Vladimir Kvachkov: “Who says that our Fatherland is in danger, he does not understand and does not see the true state of things, the true state of our Fatherland, which is not in danger, but in the occupation, with ongoing operations to complete the destruction of our Fatherland. There is a real genocide (massacre) of the Russian people. ”


Herewith, our people divided into those who are “pleased with everything” and who are “not satisfied with everything”. The ranks of the first group are either “tax collectors” - those who have something to COLLA, or the so-called obsessed - those who do not see beyond the passions of their body (fornication, drunkenness, vanity, entertainment) are anything and everyone except the objects of service to their passions. The second ranks - those who are “unhappy with everything” are made up of those who somehow touched the Russian tragedy, who drank from the cup of the bitter Russian misfortune, experienced its bitterness with their body, or without being deprived of the current universal human desire for cattle-likeness, of distinctive quality. , in its very heart feels this deadly "POISON FROM THE ELITE".

Here with the second and talk.

Brothers caring, compassionate and "all dissatisfied"! What would you like to see our homeland? Many predict about the war in the near future, and the old men warned a lot about it. Some, seeing terrible changes in society, in politics, especially concerning children, call for already concrete actions, for the creation of partisan detachments, etc. All this already in Russia was and was a success and victory ... And it all ended in the current defeat of the Russian people, the current misfortune. Why so?

What made the Russians lose the gold of the royal government? What are civil victories for - how are you getting to self-destruct? How did it happen that after defeating the “brown plague of fascism,” the Russian people became the living material of terrible experiences in the laboratory of Satanists and misanthropes? Is it not all that happens to us that we, the Russians, have forgotten that we are RUSSIAN ?! Forget what is to be RUSSIAN and what is RUSSIA HOLY!

No matter how many patriots want to bring the benefit of the Russian people, no matter how much we, the Russians, have tried to rebuild something in Russia, we must realize that all of our new “buildings” will be made in the place of the old, God-laid foundation. precisely HOLY RUSSIA. And if the next "new building" does not fit into this FOUNDATION, then it will not resist again, no matter how beautiful it would be, no matter how it beckons us - Russians with its promising abundance. Whatever the cost of blood would not be paid for it, for this "new building", fall, collapse! "And the destruction of her (temple) will be great."

Like the brethren along the ruins of Holy Russia, let's consider the foundation - the BASIS, God laid, and see what is HOLY RUSSIA, and who RUSSIAN is, and realize that there is no other dispensation, except Holy Russia!

A different concept, except for Russia - the Church, is the concept of a false utopian criminal. Therefore, anyone who wants to see our Homeland as an alliance of republics of the “free”, a powerful defense-capable state, democratic, constitutional, free, independent, self-sufficient, cared for families and child-rearing, etc., dreams of good, beautiful. After all, such a dream is the aspiration of every state and every nation. But Russia is not “every state,” and the Russian people are not “everyone is an ordinary people.”

What kind of state is HOLY RUSSIA, and what kind of people are RUSSIAN?

RUSSIA IS THE CHURCH. RUSSIAN IS A CHRISTIAN. And therefore, in order to understand RUSSIA and RUSSIAN, it is necessary to understand what is the CHURCH of God.

The church is a society of people united in spirit. The spirit manifests itself as an idea — a goal. There are only two spirits: God's Spirit and the opposite of Him are Satanic spirit. From this and the idea - there are only two goals - of God - Saving and satanic - the destructive. Man’s earthly life is short-lived, and therefore both of these goals — God's and opposing to her — have their main weight, influence on life below the line of earthly existence. Both churches, the Divine and the Satanic, have as their task to bring their novices upon termination of mortal life to their place for ever and ever in their place of being, their being. And the difference between these places is known to all: God dwells in Paradise, Satan is in hell.

Add all members of the Church Body to Yourself - to the Head - God as fully as possible. THIS IS THE UNIFICATION OF MAN WITH GOD, THE ONLY GOAL, WILL, IDEA OF GOD TO HUMAN. In this Unity, His Beloved, man ADORDS, disappears in God, dissolves in Him, Christ is imprinted in a person. God for all His creatures and more for Angels and man is Paradise. Man’s being in oneness with God is man’s being in the kingdom of God - in Paradise. And this Paradise Human life begins already here, during the earthly life. The person in whom Christ is displayed is the Christian. A Christian is His God, child, friend of God: “... the servants of you are not the verb of the word ... YOU'RE FRIENDS OF MY EAST ...” (John 15.14-15).

Upon the death of the body man, the Christian passes from a state of spiritual warfare for his right to be a Christian: to be in Unity with God — into a state of unceasing, without the difficult Triumph of the Unity of Soul with his Creator. A CHRISTIAN IS TRANSFERED FROM MEMBERSHIP OF THE CHURCH MILITARY - EARTH TO THE MEMBERSHIP OF THE CHURCH TRAVELING - HEAVENLY. Here is the only God's Will, God's Purpose and the Spirit of God the Church.

For the fulfillment of His Will, God gave man three known means: prayer, Communion, and God-thinking. God - Love has established and conditions for the use of these funds:

1) Awareness of these means to achieve the only goal set by God - Unity with God.

2) Continuity - the desire to be as much as possible, more often and longer, to be the users of these funds: that is, often, constantly, constantly pray, Communion, God-thinking.

3) Renunciation of all that is a hindrance to unity with God, that is prayer, communion and thoughtfulness. This denial is the carrying of the cross.

In all these Means, the soul, the mind (the mind is a member of the soul through which it unites with God) clings to God. Therefore, Christian work is a secret intellectual heart work, the secret of which is known only to one soul and God. It is for this reason that God and distracts consciousness - the mind of man, his feelings and will from all external, sensual, passionate, earthly, temporary ... For all the work and all pleasing God, and all the Glory of God and the Lepot - in the inner, intelligent heartfelt work. There is wrestling, there are victories and defeats, there is Love ... God took care of the outside to take care of his children from the outer, vain life (through which the whole world is captivated by Satan) and enable them to work intelligently and achieve God’s goal .

“Do not discern the saying: that the pits, that by the drink, or the clothes we wear, All the more the Gentiles are looking for. Message Bo Your heavenly Father is demanding these all. SEE THE SAME BEFORE THE REIGN OF GOD AND ITS TRUTH, and this will add to you ”(Matthew 6. 31-33).

The task of Satan is to captivate everyone into his captivity, tie him tightly to himself, tracing himself in the image of his novices, endowing them with his qualities, so that a person disappears in the image of Satan, so that having received education, as soon as possible, will pass from the earthly existence of time into hell imprisonment . THIS SOUND'S DUMPING OF SATAN IS MADE THROUGH A LOT OF MANY MEANS, THE GOAL'S GOAL AND THE GOAL IS REMAINING THE MIND (abduction, theft of the engine of the company) and THE ATTAINMENT OF IT (UMA) THE OWNER OF THE GENERAL MANUAL And through this clenching of the soul and captivated by Satan.

RUSSIA IS THE CHURCH OF GOD. Because she and HOLY RUSSIA. Rusichi are Christians, therefore not everyone born in Russia is Russian. This name belongs only to Christians. As well as not everyone who is baptized is a Christian, and not everyone who is wearing a robe (dignity) is a shepherd to the sheep of Christ. Names - Russian, Christian, shepherd by right belong to those who, in Russian, live in Christianity, who sincerely, according to God, perform their obedience to Christ and brotherhood.

Holy Russia is a people, not only the land of the plow screaming, but in the steppes and on the Volga-Mother and on the Don-Father, breathing freely through the will of the breast ...

Our fathers and mothers have commanded us to live - from them the Russian Land has gone, on them the Holy Russia kept itself together! LIVE IN CHRIST!

Today, we, the Russians, need to study our life - the LIFE of the CHRISTIAN - RUSSIAN: what is LIFE ABOUT CHRIST, what is doing - work into the glory of GOD, that NARROW GATE and the CERTAIN WAY to LIVER, and that is LIFE and the death of the soul, which is LOVE, a that passion, that the RESURRECTION is the FIRST and that the Second. We need to have a clue about ourselves - about the Russians and about their homeland. And according to the concepts then go to the battle and shed blood.

Here is for the Christian LIFE, for the opportunity to pray - truly pray! For the opportunity to communion - true by God! And from the hands of the shepherds, not wolves in robes! For the possibility of God-thinking - to read the Holy Books, for the opportunity to educate your children in God! For all these things to stand and mean - to stand for RUSSIA. For the Church of God - RUSSIA Holy war - it means to be Russian! To be a Christian, to be a child of Holy Russia, a child of Truth! GETTING READY TO BE THE CHURCH OF GOD, BY YOUR FAMILY AND YOUR FAMILY AND ALL RUSSIA. DON'T GIVE HEALTS, LIES, AND DAMAGE TO NEST IN RUSSIA.

For this, for the RUSSIAN IDEA to stand, to fight, to shed blood - and there is RUSSIAN CASE, RUSSIAN DAMN, in which VOEVODA is GOD. And with GOD ALWAYS VICTORY!

/ And the other thing that Russia needs is all the benefits that are natural to all of humanity ... even the Tsar Father, God will attach /

“LOOK BEFORE THE REIGNS OF BLOGS AND THE TRUTH OF HIS AND ALL THAT ALL WILL APPLY TO YOU” (Matthew 6. 33).