3 2013 June
15
Already for five years on the firearms market weapons there is a sniper rifle company JARD J50. During this time, the weapon has established itself as a not entirely unambiguous model, having both positive and negative qualities. Nevertheless, this rifle is ahead of many other samples of self-loading large-caliber sniper rifles in firing accuracy. In this article we will try to figure out what the secret of this weapon is, and also try to find the negative qualities of a rifle. Yes, I’m harmful, if you can’t shoot from something, you should definitely criticize it, all of a sudden JARD organizes special weapons tests for me personally ... Eh ... Dreams of dreams ... But back to the essence of the issue. 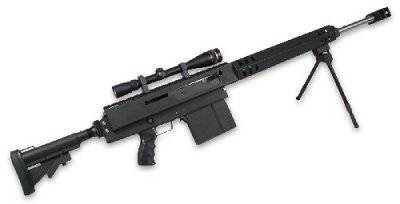 I think that no one will argue with the moment that self-loading rifles will always lose in accuracy and accuracy of shooting rifles with manual reload, of course, with the same ammunition. The reasons for the lower accuracy are usually several, the first of which is the work of automatic weapons, in which the moving parts inside the receiver have a strong influence on the effectiveness of fire, which can be seen even at medium distances. The second reason is the barrel of the weapon, which cannot be freely weighed in self-loading weapons, since powder gases are removed from the barrel bore, which requires additional parts in the weapon design that are rigidly connected to the barrel. Or in the case of more rare, when the automation system is built around the movement of the trunk, then the trunk can not show the same results, which shows a rigidly fixed thick-walled barrel that does not touch anything but the receiver. Since it is possible to fight the automation system in self-loading weapons, it cannot be completely excluded from the impact on the accuracy of fire, then to improve the performance of its rifle, JARD decided to try to cope with the barrel, making it free-suspended in a self-loading sample. 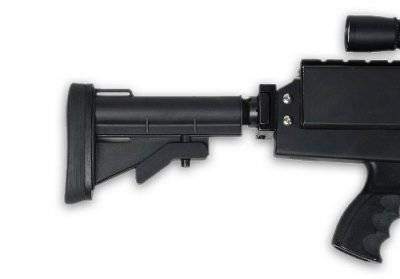 The goal that the designers set for themselves was naturally unattainable. However, it was possible to get closer to a near-perfect result, which was done. The solution, which was used in a large-caliber sniper rifle J50, proved controversial, but quite effective. It was concluded in the use of automation with the removal of powder gases from the barrel with the impact of powder gases directly on the bolt carrier, without a piston. In other words, the automation system is similar to the M16, but, of course, adapted for the cartridge 12,7x99 and the mass of the gate group. This solution allowed to fix the barrel of the weapon only in its place of attachment with the receiver, and leave the tube for removal of powder gases without attachment, fixing it only on the barrel. To protect this outrage from external influences, most of the trunk is covered with a casing, but the trunk itself does not touch it. The barrel bore is locked on the 9 stops for the breech breech. 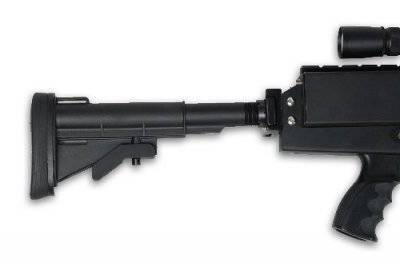 The appearance of the weapon is rather angular, but in this case it looks interesting and unusual. On the right side is a handle for cocking the shutter. The fuse is apparently a push-button, but I don’t presume to assert. Another point of interest is that the weapon can be with different butts. In the first versions, the rifle had a fixed butt, without the possibility of adjustment in length, but with an adjustable height for the cheek. In the latest versions of the weapon, the butt is replaced by an adjustable one stepwise in length, similar to that used in the M4, that is, without a stop for the cheek, although no one bothers to put it on. In addition, the butt is now folded to the left, which reduces the size of the weapon during transport.
The length of a rifle with a barrel length of 762 millimeter is equal to 1473 millimeter. Weapon weight - 11,5 kilogram. The device is fed from detachable box stores with a capacity of 5 cartridges. 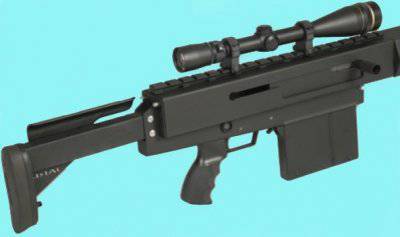 Well, now the main thing. Imagine a bucket with two holes, one with a diameter of a finger and the other with a fist. Having filled up a small hole, we, of course, reduce the speed of water flowing out of the bucket, but we will not fix it, and the decrease will be such that you will not even notice it. Similarly with this rifle. It seems that one of the reasons for less accuracy was eliminated, but the main one remained. Therefore, at least shoot me from J50, but I will not believe in the effective range of firing at enemy manpower on 2000 meters. Unless it will be a 30 man, standing motionless in a crowd. So that the weapon is interesting, but it’s impossible to talk about its unique characteristics, which is confirmed by those people who happened to get acquainted with this device, noting that this sample does not exceed other self-loading large-caliber rifles. Nevertheless, any undertakings are useful, so the J50 weapon is quite worthy of attention.

Ctrl Enter
Noticed oshЫbku Highlight text and press. Ctrl + Enter
We are
Sniper fire in local warsWhat should be a modern sniper (part of 1)
Military Reviewin Yandex News
Military Reviewin Google News
15 comments
Information
Dear reader, to leave comments on the publication, you must to register.