“Monument to the tormentor of Christians offends the whole Belarusian people”: open letter to Alexander Lukashenko 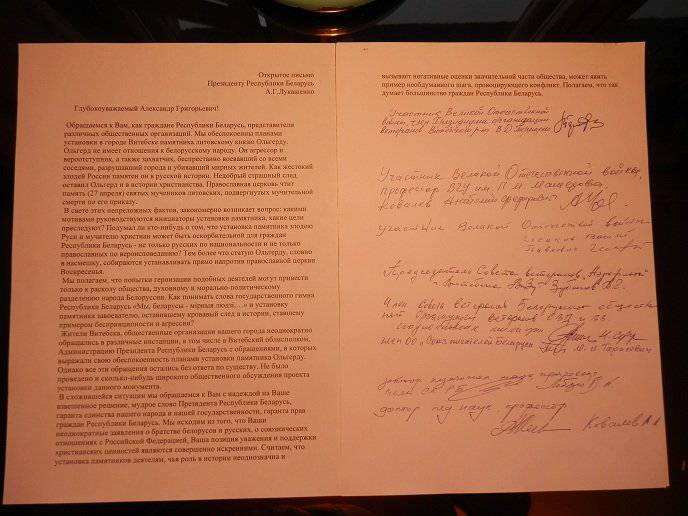 Over the past years, the authorities of Belarus have made great efforts in promoting the Polish-Lithuanian heritage and presenting it as “Belarusian”. Throughout the country, at the expense of the republican and local budgets, the estates of representatives of the Polish-Lithuanian nobility are restored, monuments to them are established. One of those is the monument to Olgerd, the ruler of the Grand Duchy of Lithuania, who is known for his conquests on Moscow and his ambiguous attitude to Orthodoxy. According to the plans of the Vitebsk city executive committee, the equestrian sculptural composition will be installed in the center of the city next to the Orthodox church by June 26 of 2013. Representatives of the Russian organizations of Belarus have repeatedly stated: the installation of the monument to Olgerdu is a demonstrative challenge not only to Russia, but also to the Orthodox Church. Nevertheless, the city and republican authorities intend to bring the work begun to the end, in connection with which representatives of the Belarusian public have addressed with an open letter to Alexander Lukashenko. The text of this letter was received by 13 in May to the editors of REGNUM and is published with preservation of orthography and punctuation of the original. 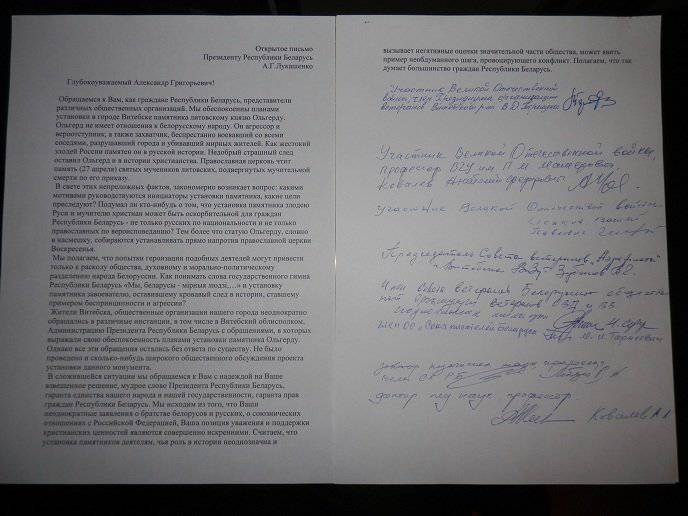 "An open letter to the President of the Republic of Belarus A.G. Lukashenko

We appeal to you, as citizens of the Republic of Belarus, representatives of various public organizations. We are concerned about the plans to install a monument to the Lithuanian Prince Olgerd in the city of Vitebsk. Olgerd has no relation to the Belarusian people. He is the aggressor and apostate, as well as the invader, who constantly fought with all his neighbors, destroying cities and killing civilians. As a cruel villain of Russia, he is remembered in Russian stories. The evil horror left Olgerd in the history of Christianity. The Orthodox Church honors the memory (April 27) of the Lithuanian holy martyrs, subjected to a painful death on his orders.

In the light of these immutable facts, the question naturally arises: what motives the initiators of the monument are guided by, what goals are they pursuing? Has anyone thought that the installation of a monument to the villain of Russia and the torturer of Christians can be offensive to the citizens of the Republic of Belarus - not only Russians by nationality and not only Orthodox Christians? Moreover, the statue of Olgerd, as if in mockery, is going to be installed directly opposite the Orthodox Church of the Resurrection. 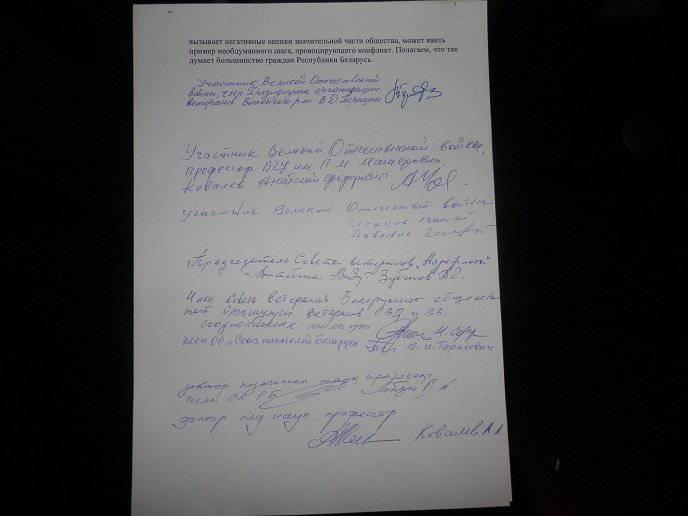 We believe that attempts to glorify such figures can only lead to a split of society, the spiritual and moral-political division of the people of Belarus. How to understand the words of the national anthem of the Republic of Belarus "We, Belarusians - Peace, ..." and the installation of a monument to the conqueror, who left a bloody mark in history, which became an example of unprincipled and aggression?

Residents of Vitebsk, public organizations of our city have repeatedly appealed to various authorities, including the Vitebsk Regional Executive Committee, the Administration of the President of the Republic of Belarus, in which they expressed their concern about the plans to install the monument to Olgerdu. However, all these appeals remained unanswered in substance. Nor was there any broad public discussion of the project for the installation of this monument.

In this situation, we appeal to you with hope for your informed decision, the wise word of the President of the Republic of Belarus, the guarantor of the unity of our people and our statehood, the guarantor of the rights of citizens of the Republic of Belarus. We proceed from the fact that your repeated statements about the brotherhood of Belarusians and Russians, about allied relations with the Russian Federation, your position of respect and support for Christian values ​​are completely sincere. We believe that the installation of monuments to figures, whose role in history is ambiguous and causes negative evaluations of a significant part of society, may be an example of a thoughtless step provoking a conflict. We believe that the majority of citizens of the Republic of Belarus think so. "

Ctrl Enter
Noticed oshЫbku Highlight text and press. Ctrl + Enter
We are
"Occupation" with a gainReligious conflict in Abkhazia? It is possible
Military Reviewin Yandex News
Military Reviewin Google News
54 comments
Information
Dear reader, to leave comments on the publication, you must to register.