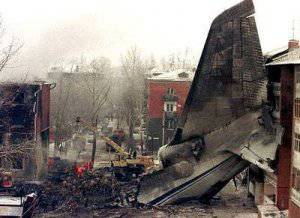 On December 28, the An-22 plane crashed in the Tula region. According to the press service of the Internal Affairs Directorate in the Tula region, the An-22 transport aircraft belonging to the Ministry of Defense of the Russian Federation fell in the 23.30 Moscow time not far from the village of Maloye Skuratovo, Chernsky District.

On the sixth of August in the Trans-Baikal Territory, approximately 60 kilometers north-west of the Steppe airfield, Su-25 UB crashed during scheduled flights. The crew of the aircraft ejected. There are no casualties on the earth.

On February 17, in the Leningrad Region, the Su-24 fighter caught fire during takeoff, both pilots are alive. There are no victims and destructions in the state of emergency.

On November 6, the Tu-142 plane of the Russian Defense Ministry crashed in the Khabarovsk Territory, falling into the water area of ​​the Tatar Strait.

On board were 11 people. During the search operation, which lasted more than two months, it was possible to establish the exact location of the crash of the aircraft, and also to find hundreds of large and small fragments, including engines, wings and part of the fuselage, on the bottom and lift to the surface. In total, about 10 tons of various fragments of the crashed aircraft were lifted to the surface. The bodies of the pilots and the "black boxes" then could not be found.

On November 1, the Il-76 military transport aircraft belonging to the Ministry of the Interior of Russia crashed after departure from the airport in the city of Mirny in Yakutia. The people on board the 11 — the members of the main and replacement crews — were killed.

On August 16, in the sky over Zhukovsky in preparation for the MAKS-2009 air show, a plane crash occurred in which the Su-27 fighter and Spark (two-seater) Su-27UB from the Russian Knights aerobatic team collided. All three pilots ejected, but one of them — the commander of the Guard group, Colonel Igor Tkachenko — died. Another pilot during a bailout injured his spine. As a result of the disaster, several people were injured on the ground: one of the airplanes fell on the territory of the dacha settlement, as a result of which three houses were burned down. Three people were delivered to hospitals with moderate burns.

On June 19, in the Rostov Region, the Su-24 bomber fell on landing after performing a planned flight. Both pilots managed to eject, they are alive. According to the Ministry of Defense of the Russian Federation, there are no victims or damages on earth.

On the seventeenth of June the Su-24 bomber crashed in the Murmansk region, the pilots managed to eject. The accident occurred at the airport Monchegorsk. The plane performing the scheduled flight fell on the runway when approaching. The machine is completely destroyed and burned. Both pilots Su-24 managed to eject, their health condition does not cause concern. There are no victims and destructions on the earth.

On March 17, in the Krasnodar Territory, in the area of ​​the Kushchevskaya airfield, the L-39 aircraft of the Krasnodar Higher Military Aviation Pilot School crashed during a training flight. At the site of the fall of the victims and destruction there. Pilot instructor pilot died.

On the seventeenth of October in the Chita region a MiG-29 fighter aircraft of the Russian Air Force crashed. The pilot ejected.

On the 5th of December in the Chita region during the execution of the planned training flight the MiG-29 fighter crashed. The pilot died.

On July 29, a few minutes after taking off from one of the airfields of the Far Eastern Military District near Ussuriisk, the Su-27 fighter crashed. The flight was conducted in order to fly around the aircraft after the factory work. One pilot died, another managed to eject. There are no casualties on the earth.

On March 21, in 30 kilometers from Millerovo, near the Degtevo Farm (Rostov Region), during the scheduled flights of the 4 Air Army of the Air Force and Russian Air Defense, two MiG-7 fighters collided at an altitude of about 29 thousand meters. The pilots practiced flying a couple, performing an exercise for flying. The pilots of the colliding fighters did everything so that the machines did not fall on the village of Degtevo. Both aircraft fell on corn fields and burned. As a result, there are no casualties; the pilots ejected.

On July 27, in the Perm region, when taking off from the Bolshoe Savino airfield, a two-seater MiG-XNUMHUB plane of the Strizhy aerobatic flight group crashed. The pilots ejected.

On September 15, the Su-27 Russian Air Force fighter crashed and crashed into a field near the village of Yotishkes of the Sakiai region of Lithuania on the border with the Kaliningrad region. No one was hurt in the disaster. Pilot Major Valery Troyanov catapulted.

On June 1, the MiG-31 crashed in the Tver region. The fighter left the runway and burned down as a result of the fire. The crew was not injured.

On the 12th of May in the Tver region a Russian Air Force MiG-29 fighter crashed. The accident occurred in the area of ​​the airfield of the city of Adriapol during scheduled flights MIG-29. The pilot died.

On November 12, a Russian MiG-29 aircraft crashed in Armenia during a training exercise. The plane went into a spin and could not get out of it. The pilot died.
On October 14, the MiG-31 fighter jet of the Russian Ministry of Defense crashed in the Tver region. The incident occurred in Staritsky district near the village of Borovaya. Both pilots managed to eject.

On July 2, in the Murmansk region, a MiG-25 plane crashed during a training flight. During takeoff from the fighter, the engine failed. The plane fell into the lake on the outskirts of Murmansk. The pilot ejected.

On June 19, an MiG-29 combat training aircraft crashed near Armavir in the Krasnodar Territory. The pilot and the cadet ejected.

On December 19, a Su-35 multi-role fighter crashed in the Moscow region. It fell 80 kilometers from the city of Ramenskoye, on the territory of Yegoryevsk District. The fighter was driven by a test pilot of the Sukhoi Design Bureau. The pilot ejected and was not injured.

On March 26, a Su-40 fighter from the Air Force and Air Defense forces fell in 27 kilometers from Vladivostok. The likely cause of the disaster was engine failure. The pilot ejected.

July 85 near Pskov during demonstrations dedicated to the XNUMXth anniversary of the Naval aviation, a Su-33 fighter crashed, piloted by the deputy commander of naval aviation, Major General Timur Apakidze.

On the nineteenth of June in the Komsomolsk-on-Amur region, the Su-17 М3 fighter crashed. The plane carried out a test flight after repair at a local aircraft factory, during which the electronic equipment was tested. Both test pilots died.

On May 17, the Su-27 crashed in the Tambov region during a flight mission. The cause of the accident was the failure of the power system and the ignition of the legal engine. The pilot ejected.

The nineteenth of March in the Astrakhan region crashed MiG-29UB fighter aircraft of the Russian Air Force. The cause of the disaster was a fire in the first engine of the aircraft. Eight minutes after the fire, the plane lost control. Both pilots ejected.

On May 33, during a scheduled flight, the carrier-based Su-27 (Su-XNUMXK) fighter of a separate aviation regiment of the North crashed fleet. 1st-class pilot Colonel Pavel Kretov ejected. The plane crashed in a deserted area. There are no victims and destruction. According to preliminary data, on-board control system failure occurred when the Su-33 was in an inverted flight at an altitude of about 2 thousand meters.

On the night of April 6, during the landing approach, after completing the night mission at the airbase in Kotlas (Arkhangelsk Region), the MiG-31 U fighter crashed. One of the pilots — Major Yevgeny Stroitelev — died. Another pilot — Colonel Gennady Mashevsky — received minor injuries. The cause of the catastrophe was the fact that during landing he had broken the landing gear and the plane dropped from the runway.