US warns Russia against supplies of missiles of Syria ("The Washington Post", USA) 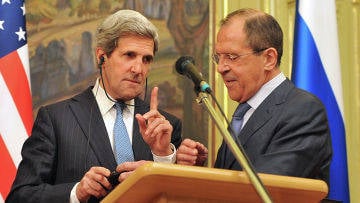 Since the Syrian rebels have no military aircraft, C-300 systems are perceived mainly as a threat to any Western or Arab country that tries to establish a no-fly zone over Syria.


The Obama administration on Friday harshly warned Russia, urging it not to disrupt attempts at peace negotiations and not disrupt the balance of power between Israel and its neighbors, supplying the Syrian regime with modern anti-aircraft missiles.

Sending C-300 systems to Syrian President Bashar Assad will prolong the civil war and possibly expand its scale, becoming a threat to Israel, Secretary of State John Kerry said. So far the incoming information about whether Russia has sent C-300 complexes to Syria is contradictory.

This statement turned out to be the most critical of all that concerns the sale of Russian weapons to Syria, and contrasts with the warm tone of cooperation that Kerry and Russian Foreign Minister Sergey Lavrov demonstrated during their meeting in Paris on Monday devoted to agreeing on a plan for a peaceful conference Syrian government and rebels.

There are no exact plans for this conference yet, and the rebels opposing the Assad regime are trying to overcome internal contradictions. The conference itself will test the Russian desire for a peaceful end to the war, Kerry said. He noted that “up to 100 thousands of people” were killed during the clashes.

The United States supports the rebels, while Russia has long been an ally and supplier of weapons for Assad. And although Assad has long wanted to get C-300 missiles, Russia has so far sent the regime less lethal types of weapons, such as ammunition and weapons.

Since the Syrian rebels have no military aircraft, C-300 systems are perceived mainly as a threat to any Western or Arab country that tries to establish a no-fly zone over Syria. They can also be a threat to Israeli fighters attempting to attack Syrian chemical weapons stocks. On Assad’s side, a significant number of Hezbollah members are now fighting, and Israel is increasingly concerned that they can seize chemical weapons and use these weapons against them.

“In our opinion, this is irresponsible because of the size of the weapon, its nature and how it affects the region with regard to Israel’s security,” Kerry said at a joint press conference with German Foreign Minister Guido Westerwelle on Friday. “Therefore, we hope that they will abandon this in the interests of the peace process.”

The United States has long promised to provide Israel with a military advantage in a region full of enemies. In practice, this means that the United States will transfer or sell advanced weapons and equipment to its close ally, and will take into account the interests of Israel in such transactions with its neighbors.

“I want it to be absolutely clear,” said Westerwelle in English. - We tell our Russian colleagues - do not put in jeopardy the holding of a peace conference in Geneva. The supply of weapons to the regime (Syrian President Bashar) Assad is an absolutely erroneous step. ”

Kerry said earlier that the United States and Russia have a common goal - to stop the war and prevent the fall of Syria and the rise of extremism.

However, his comments on Friday demonstrate the concern that Russia may play a double game.

“In Geneva, we will check who is serious,” said Kerry.

“Are the Russians serious about this?” I think yes. President Putin said so. Sergey Lavrov talked about this, ”said Kerry. “But the delivery of C-300 to the region clearly does not help when you are trying to organize a peace process and establish peace."

The leaders of the Syrian opposition are now choosing new leaders at a meeting in Turkey, and the State Department welcomed the gradual progress they have achieved. The US wanted more diverse and secular leaders to reduce the influence of the Muslim Brotherhood in the ranks of the opposition.

Its leaders did not agree to participate in negotiations organized by Russia and the United States. The Assad government agreed to send their representatives to them. The session may take place in June or in July with the support of the UN.

"I am not going to discuss the scenario of what will happen if the opposition does not come to the conference, because I am convinced that it will come," said Kerry.