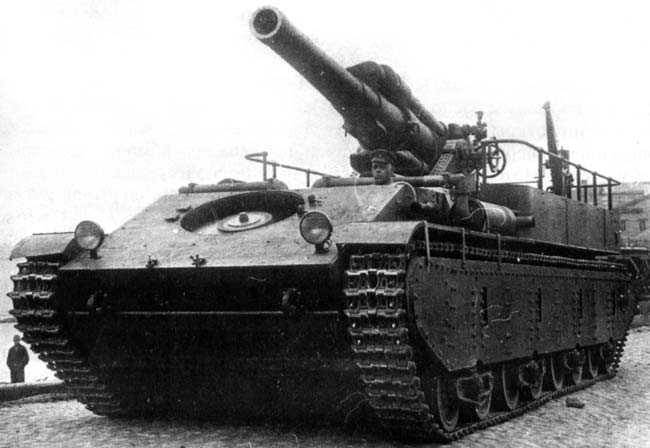 Outline designs were reviewed in July 1932 and generally approved. For the "case triplex" they decided to use an elongated medium chassis tank T-24, and for the "triplex TAON" - a special chassis, which includes nodes of the heavy tank that was being created at that time. But the manufacture of the “case triplex” was postponed for two years, and no weapons were found for the “TAON triplex”, since there were no 152 mm high-power guns or 305 mm mortars. Only a howitzer version of the "triplex" armed with a 203-mm B-4 gun was submitted for development.

In 1933, at the pilot plant of Spetsmashtrest, under the leadership of P.I.Syachintov, the design and manufacture of a self-propelled installation for the TAON triplex (which soon received the SU-14 index) began according to the scheme proposed by the Military Academy of Motorization and Mechanization. The first chassis was ready in May 1934, but due to transmission failures that were borrowed from the T-28 medium tank, its trimming lasted until the end of July 1934.
The body of the car was made of sheets of rolled armor with a thickness of 10 - 20 mm, which were interconnected by welding and rivets. The driver was located in a reserved cabin in the forward part of the hull at the left side. He led the observation through inspection hatches, closed by armored covers with viewing slots, located in the front and side sheets of the cabin. Landing driver was made through the hatch in the roof of the cab. The remaining six crew members were located in the rear part of the three removable seats. 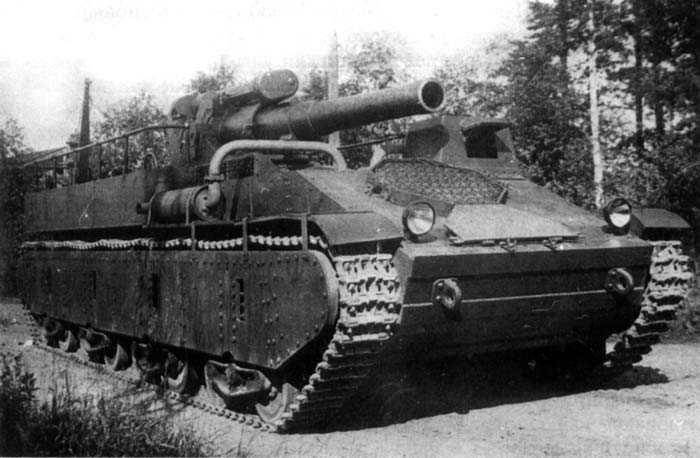 As the main weapons 203-mm howitzer obn.1931 g. (B-4) with the upper machine, lifting and turning mechanisms were used without any alterations. For aimed shooting the panorama of Hertz was used. As an auxiliary weapon, three 7,62-mm DT machine guns were used, which could be installed in six bowling installations (three per side). In addition, for one machine gun DT was provided anti-aircraft turret, located on the right in front of the deck of the self-propelled. The mounted ammunition of the installation was 8 shots of separate loading and 2268 cartridges (36 disks) for DT machine guns.

To facilitate the process of loading the howitzer from the ground and the delivery of shells in the cocks (special cradles), the machine was equipped with two cranes (winches) with a lifting capacity of 200 kgf. Shooting was done only from the spot, while the machine was fixed on the ground with the help of two openers, which had a manual and electric drive hydraulic cylinders. Vertical howitzer pointing angles ranged from + 10 ° to + 60 ° and horizontally in the 8 ° sector without turning the machine. The firing range reached 18000. The rate of fire was 1 shot per 5,7 min. The transfer time of the gun from the traveling position to the combat position - 6,5-10 min. 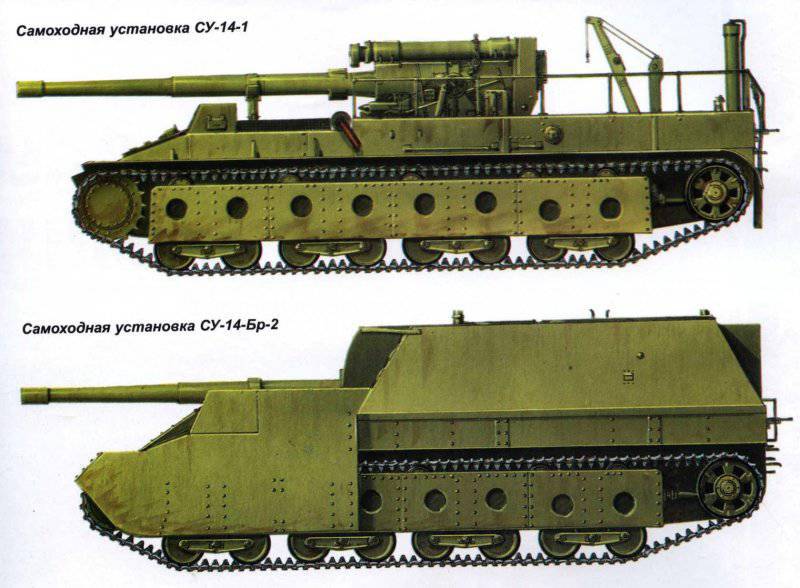 The installation used a four-stroke, twelve-cylinder Y-shaped carburetor engine M-17 with the power of 500 hp. (368 kW) with two Zenith carburetors (CD-1). The engine was started using a Scintilla starter with an 6 horsepower. (4,4 kW) and voltage 24 B. The ignition system used two magneto "Scintilla 12D" and starting magneto. The capacity of the fuel tanks was 861 l. The range of the installation on the highway reached 100-120 km.

The transmission included: multi-plate main friction clutch for dry friction of steel on Ferodo, a five-speed gearbox (borrowed from the medium T-28 tank), two multidisk onboard friction clutches of dry friction (24 disc) with floating band brakes, two onboard gearboxes of the original design and a reducer of the original friction unit and a reducer of the original design and reducer. power to the fan. The intake of cooling air was carried out by an axial fan through the intake window in the upper front sheet of the hull and was ejected through the side hatches closed with grills.

Candle, spring suspension of the machine, fastened to the sides of the hull, had a shutdown mechanism for unloading it when firing. In the undercarriage were used (in relation to one side) eight support rollers of average diameter, six supporting rollers, rear-wheel steering wheel with a screw tension mechanism and drive wheel with removable gear rims tsevochnogo engagement with the track. Chassis nodes were borrowed from a heavy T-35 tank. The supporting, supporting rollers and guide wheels had external damping. When testing machines were used guide wheels with a metal bandage, which have proven to be more reliable in operation than the wheels with a rubber bandage. 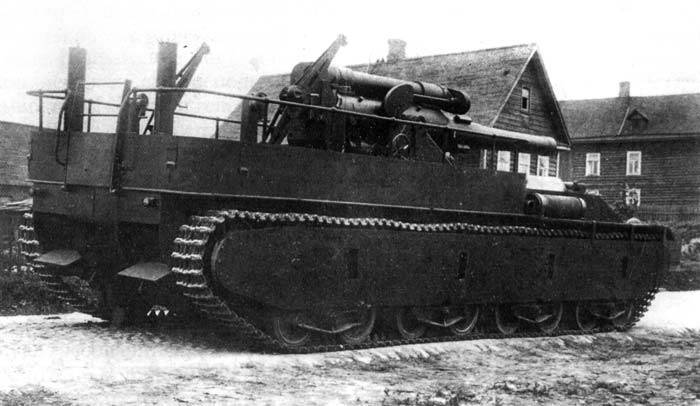 Electrical equipment of the machine was performed on a single-wire circuit. The voltage of the onboard network was 12 B. Two 6STA-1X batteries with a capacity of 144 А • h, connected in series, as well as a dynamo (generator) of the “Scintilla” with 1 kW and 24 V voltage were used as power sources.

After a factory run-in, the SU-14 went to the Scientific Test Artillery Ground (NIAP) for shooting. But during the delivery of the chassis it was damaged: several tracks cracked, there was noise in the gearbox, the engine overheated, and therefore the test run on the 250 km was canceled. The shooting went quite smoothly, although the machine was swaying strongly during the shots and being on its deck (the ACS working platform was called that way) was only possible by holding tight to the handrails. The rate of fire turned out to be excessively low, since heavy shells had to be lifted to the deck with the help of uncomfortable cranes and winches; the design of the sliding floor-hatch, which broke during the tests, was also unreliable.

After the breakdowns were corrected, the ACS again arrived at the landfill. Now she had reinforced track tracks and an improved cooling system. The barrel of a low-power gun was replaced with a high-power barrel with a liner. This time the tests began with running in. But on the thirty-fourth kilometer broke gearbox. During the tests, the shots were made not only along the direction of movement at a high angle of elevation, but also horizontally, with extreme guidance angles, even with raised coulters. 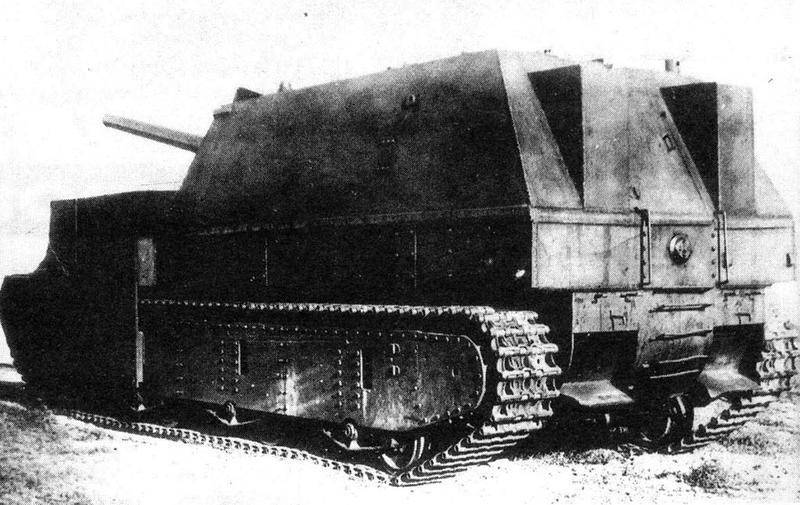 According to the test results, a long list of necessary revisions of the SU-14 was drawn up, which crossed out the possibility of adopting it in its original form, and 31 January 1935. The Experimental Plant of Spetsmashtrest was given the task to overhaul the SU-14. But the upgrade, carried out in February-March, was half-hearted, as it touched only the undercarriage and the engine-transmission group (in the modified version of the SU-14, the gearbox and main friction clutch from the T-35 tank) were used, almost without affecting its warhead.

From 5 April to 24 in August 1935, during factory tests, the upgraded model SU-14 overcame more than 500 km in various conditions, demonstrating good driving performance. However, numerous drawbacks were noted again. In particular, it turned out that it was impossible to fire through ball-like embrasures designed for DT machine guns, just as it is impossible to quickly use portable ammunition (8 shots), which was under removable deck lids blocked by the body of the gun in the stowed position. 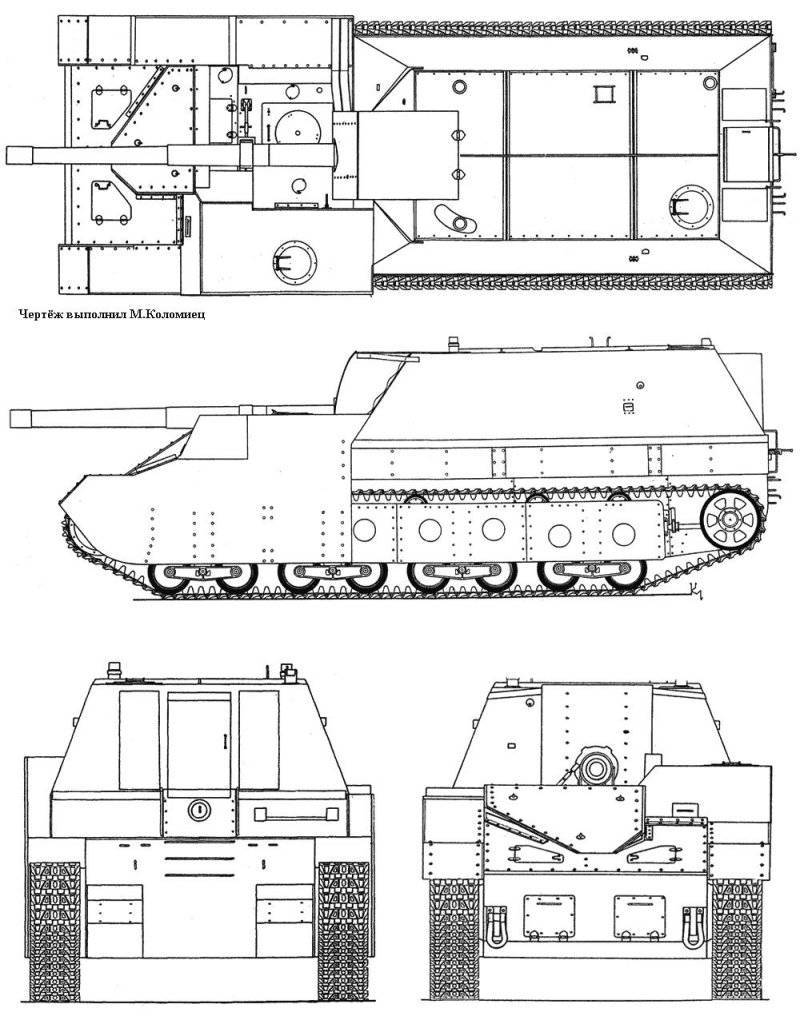 Using the experience gained while working on the SU-14, the design department of the Experimental Plant developed the drawings for building the reference sample of the self-propelled unit SU-14-1, which was made at the beginning of 1936. It had an improved design of the gearbox, main clutch, brakes and final drives (a number of units were borrowed from the T-35 tank); the exhaust pipes were moved away from the driver’s cabin, the support coulters were improved.

The main weapon of the machine remained unchanged - X-NUMX-mm howitzer B-203 arr. 4. Ammunition to the gun remained unchanged. The 1931 ammunition round of shots, as well as on the SU-8 self-propelled unit, was considered reserve enough only to quickly start opening fire before the arrival of a special transporter-charging box with 14-50 rounds of ammunition. As a transporter, it was planned to use a high-speed tracked tractor-tractor "Comintern" produced by HTZ. If necessary, two such tractors could tow a self-propelled unit. Ammunition for machine guns DT was reduced to 60 cartridges. 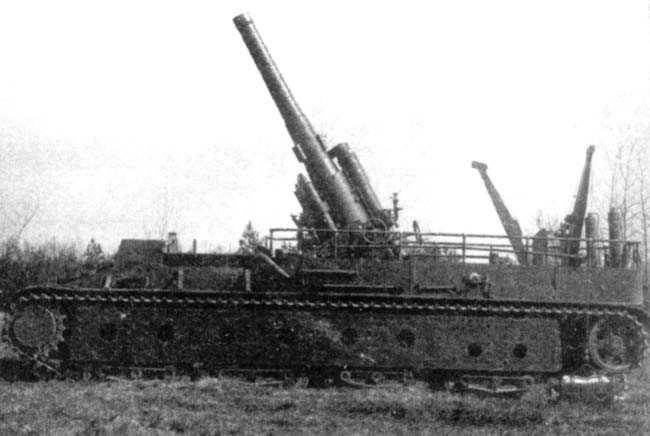 The armor protection remained unchanged compared with the SU-14 self-propelled unit armor, with the exception of the thickness of the bulwark, the value of which was reduced from 10 to 6 mm. The armor plates of the hull were connected by welding and rivets.

The car got forced to 680 HP M-17T engine, which allowed the "triplex" with 48 t mass to reach speeds up to 31,5 km / h. In the chassis used thicker sheets of the main spring and abandoned the mechanism to turn off the suspension at the time of shooting. This model of the SU-14-1 was tested by running from April to September 1936 (about 800 km), and from April to September 28 on 29 - by multiple shooting at NIAP.
At the end of November, 1936-mm long-barreled guns U-152 and BR-30 were delivered from the Uralmash plant and the Barricades plant to test the cannon version of the triplex. The rearmament took place at the end of 2, and the tests of machines equipped with guns took place in February 1936 and ended successfully. The plan for 1937 provided for the production of an installation series of five SU-1937-Br-14 machines (with an 2-mm gun Br-152), and with 2, it was planned to start their mass production. By the summer of 1938, it was envisaged to create an 1939-mm self-propelled mortar SU-280-Br-14, but the howitzer variant SU-5-B-14 was not remembered, since the creator of the howitzer B-4 Magdesiev, head of the Bolshevik design bureau, he broke down during interrogations and confessed to his wrecking activity. True, he was soon arrested and the head of the work on the SU-4 P.I. Syachinov, and with this interesting fighting machine the same thing happened as with the B-14 gun. All work on the preparation of serial production of ACS was stopped, and two finished samples were transferred for storage to military warehouse No. XXUMX in Moscow. 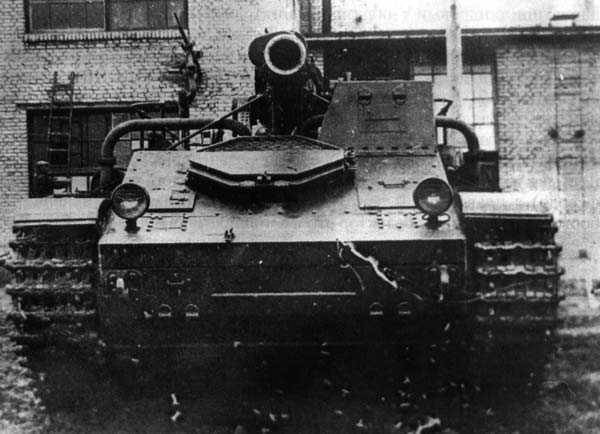 They recalled them in December 1939, during the storming of the "Mannerheim Line". The Red Army, faced with powerful modern fortifications, acutely felt the need for armored artillery installations of large calibers. By the Decree of the USSR Defense Committee on January 17 1940, "On special assignments for the needs of the Army in Action", Plant No. XXUMX named after SM. Kirov (the former Experimental Plant of Spetsmashtrest) was instructed to "repair and shield two SU-185 with armor plates". It was assumed that the screened self-propelled guns will be able to freely approach the Finnish dots on 14 - 1,5 km and shoot them in direct fire.

At the end of January, 1940 cars came from Moscow to the factory, but the work dragged on - armor plates from the Izhora factory began to arrive only at the end of February. The shielding of the machines was completed only by March 20, when the fighting was over. Self-propelled guns, which received additional armor 30-50 mm in thickness, began to weigh 64 t. 27 March vehicles were run-in on a route of 26 km. It was noted that "at 3-4 transmission speed does not exceed 20-22 km / h., When driving on virgin soil, the engine works hard, turns turn hard." Due to the heavy overload on the prototype SU-14, the rubber bands of the road wheels were replaced with metal ones. 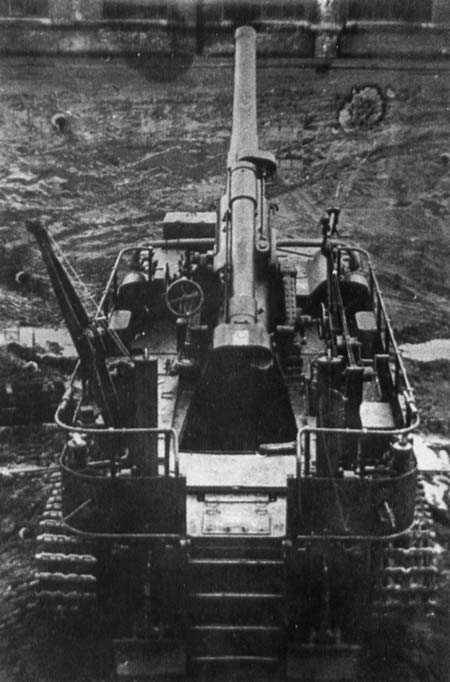 In April, the 1940 of the SU-14 and the SU-14-Бр-2 were tested at the NIAP, and in July as part of a group of tanks of captain P. F. Lebedev - in the Kiev Special Military District. In September, 1940 was transferred to both cars by NIBTPagon for storage. In the autumn of 1941, during the defense of Moscow, both SU-14, along with another experienced self-propelled gun T-100-Y as part of the Special Separate Heavy Division, were used in the area of ​​Art. Kubinka for shooting from closed positions at the advancing German troops. 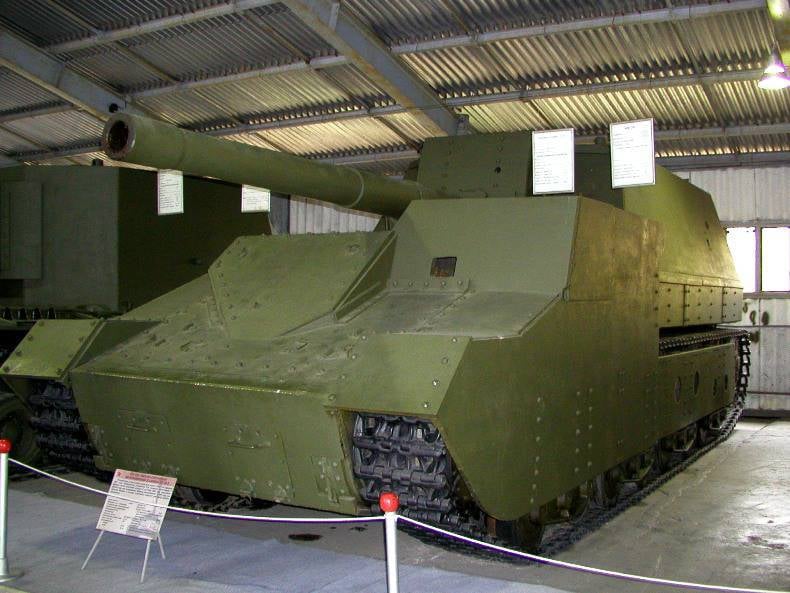 The article is made on the materials of the magazine "Bronekolletsija" No. 2 from 2006.
Ctrl Enter
Noticed a mistake Highlight text and press. Ctrl + Enter
We are
Super Destroyers. Alt SU-14Lightly armored "self-propelled floating installation K-73" or "floating airborne self-propelled artillery installation ASU" 57P "
7 comments
Information
Dear reader, to leave comments on the publication, you must to register.