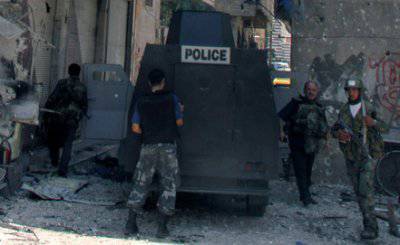 Turkish law enforcement agencies detained 12 people who were engaged in the transportation of poison gas to Syria, ITAR-TASS reported.


According to reports, the detainees are members of the Jabhat al-Nusra rebel group, close to al-Qaida. The criminals were detained in the city of Adana in southern Turkey, they seized containers that contain two kilograms of poison gas "Zarin", created before the Second World War in Germany. Chemical weapon intended for militants fighting with the Syrian armed forces. Following the results of the interrogation, five people were released, the rest will be charged.

Russia is in favor of a thorough investigation of the incident. “We consider it particularly important to conduct the necessary investigation, identify and publicize all the details of the incident in order to prevent terrorists from attempting to use chemical weapons against civilians and to provoke external intervention in Syria,” said Foreign Ministry spokesman Alexander Lukashevich.

Recall that in March, the Syrian authorities reported that the armed opposition used chemical weapons in the province of Aleppo, 25 people became victims of the attack, 110 was also seriously injured. Opposition denies accusations.

It is interesting how democrats will get out now?

Variant two: either they will declare all this as a provocation of Assad, or all the militants will suddenly die when they try to escape, and there are witnesses that gas was being carried on Assad's instructions.

Ctrl Enter
Noticed oshЫbku Highlight text and press. Ctrl + Enter
We are
According to the results of the exhibition "Oboronexpo-2014"Syria 28.12.2012 News
Military Reviewin Yandex News
Military Reviewin Google News
39 comments
Information
Dear reader, to leave comments on the publication, you must to register.