Denying Russian Russia, the grief reformers condemn themselves to defeat. 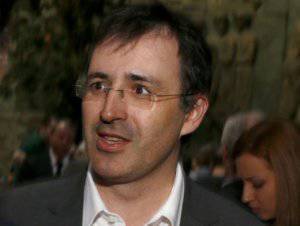 Reflections in connection with the “emigration” of Sergei Guriev


From the editors of KM.RU. In the liberal press that day is a moan about the latter-day "political émigré" Sergei Guriev. Here is just one example. But, as always, you can look at any problem from two points of view. Therefore, we decided to present to your attention a different look at the departure (still, by the way, it is not clear whether it actually happened) of Mr. Guriev for permanent residence in France. Vladimir Tor (Vladlen Kralin, a member of the Coordination Council of the opposition, one of the leaders of the nationalist movement, shared his vision of this problem in his LJ.

We remind you that the point of view of the authors of the materials does not always coincide with the opinion of the editorial board.

Sergey Guriev, Ph.D. in Physics and Mathematics, Doctor of Economics, Rector of the New Economic School, Guest Professor at Princeton University, Co-Editor of Economics of Transition (London), Member of the Supervisory Boards of Sberbank and the Mortgage Lending Agency, AlfaStrakhovanie Board of Directors and "other, other, other ..." the other day he was summoned to the investigator on the Yukos case. After that, the rector promptly resigned from all posts in Russia and promptly left for Paris as a political refugee, judging that it was better than being a neighbor in the chamber of one of his grant givers - s / a Khodorkovsky. The political motive of these events is obvious. Guriev openly supported Alexei Navalny and even participated in the financing of his anti-corruption campaign.

Note that part-time Sergei Guriev was part of the “open government” under Dmitry Medvedev, was a member of the Commission for the implementation of priority national projects and demographic policy. Competent sources call it a connecting bridge between Russian economic science, the international community of economists, managers of Russia's largest corporations, and the highest political establishment of the Russian Federation. In all these strata, he was not just an entree, but was their natural component; in all these clubs, he enjoyed equal respect, although the degree of his influence in one should not be exaggerated.

I am categorically against criminal and political persecution, which have become the daily practice of the current regime in the Kremlin. In order to overcome the crisis, Russia is in dire need of political freedoms - freedom of speech, assembly, alliances, in a freely elected parliament, which controls the government accountable to its voters, in freely created political parties, in a fair trial, independent of hail from the Kremlin. Alas, there is no such thing in Russia, and история with Guriev - a bad symptom.

However, I have to, like Ostap Bender addressed to Panikovsky, ask the question: “But was the deceased a moral person?”

"Down with" Russia for the Russians "!"

“For me, the slogan“ Moscow for all ”is a return to normality, to a situation where white is called white, black is black, and the slogan“ Russia for Russians ”is fascism. Unfortunately, after the events at Manezhnaya it turned out that many people who consider themselves enlightened and educated, began to discuss the shades of this slogan. Statements like “those who speak of“ Russia for Russians ”sound somewhat right”. I believe that such conversations are unacceptable and lead to the destruction of Russia.

Talk about the halftone of fascism shifts the understanding of normality and gives the wrong signals. Police will begin to doubt whether to fulfill their duty to protect citizens from criminals, regardless of nationality, as prescribed by the Constitution. Teachers in schools will not know how to talk about pogroms. Journalists will again write about "persons of Caucasian nationality." The main thing is to scare to think about what the new generation of Russian politicians will be like.

Standard arguments for avoiding any compromises in the fight against fascism are well known. This is also the fact that multinationality and diversity are a key advantage for the development of society and the economy. This and the fact that the majority of Russians will find non-Slavic ancestors, relatives and friends, so any discrimination against a minority will necessarily result in a blow to the majority. This is a reference to the African origin and Alexander Pushkin's non-Slavic appearance. This and the fact that a hundred years ago pogroms (yes, the word pogrom is a Russian invention) did not reinforce, but destroyed the Russian empire. This is also the fact that in any flirting with the Nazis about building a modern economy, the innovation city of Skolkovo and the International Financial Center, it will be possible to forget ... ”(Sergey Maratovich Guriev specifically for Slon.ru).

And so on and so forth.

At the same time, a prominent Russian scientist does not notice that present-day Russia has, for a long time, not been for Russians, and there have been no political rights and freedoms either. And in some republics of the North Caucasus, the native of which is the respected Sergey Maratovich, an openly fascist regime has been established for itself. Contrary to official propaganda of multiculturalism, “people of Caucasian nationality” under the mock “Moscow for All” were still massively occupied news tapes of criminal chronicles, atrocious throughout Russia, are especially dense - as they approach the walls of the capital.

Teachers are obliged to broadcast to schoolchildren about pogroms now, ever and ever, and for these sermons the Russians in Russia are dying out, yielding their country of mass migration from Central Asia.

The budgets of the “innograda” of Skolkovo and the International Financial Center have been successfully drank, and you can really forget about them. And it is not Russian nationalists who are to blame for all this.

The argument about “Pushkin's Negro” is somehow even awkward to listen to ...

I just want to ask Sergey Maratovich: “What, son, did your Poles help you?” You probably thought that the terrible Russian nationalists would come to your door and pogrom? And your fighters for a polyethnic united Russia came to you, and here you are a political refugee in Paris. What a twist of fate: one tower of the Kremlin to another drove ...

It seems that you wanted to build a civilized civil society in Russia, political freedoms and curb corruption? So after all the civil majority in Russia coincides with the Russian national majority, and nothing else. Denying Russian Russia, the pseudo-reformers doom themselves to defeat, making “democratic” reforms hostage to minorities and, therefore, inevitably slipping into marginality, which cannot be defeated by definition. It was necessary to think about it, while you were still “a member of the Commission for the Implementation of Priority National Projects and Demographic Policy” and “Other, Other, Other ...”: think and listen to the Russian National Democrats.

Now this, alas, is not your business.

But, as “Pushkin the Negro” wrote, “his example is a different science ...”

Ctrl Enter
Noticed oshЫbku Highlight text and press. Ctrl + Enter
We are
"All the criminal case of a" military coup "in Russia rests on the provocation of the FSB"
Military Reviewin Yandex News
Military Reviewin Google News
26 comments
Information
Dear reader, to leave comments on the publication, you must sign in.