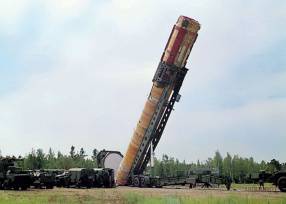 As Interfax reported, the scheduled extension of the service life of the RS-20 Voyevoda complexes (according to the NATO classification SS-18) of the Russian Strategic Missile Forces (RVSN) caused some concern in Ukraine. According to a high-ranking Ukrainian military source, Russian events will require the provision of the necessary legal framework. “Considering the plans announced by the Russian side to extend the life of the PC-20 complex, to ensure that these works are carried out on a legal basis, the Russian Federation and Ukraine need to extend the validity of the bilateral Ukrainian-Russian intergovernmental agreement from 2006 on the 15P118M complex (PC missile launchers 20. - “NVO”). The agreement expired in 2012 year, ”said the agency interlocutor.


Under the agreement, the work on the extension of the service life has the right to perform exclusively the lead developer and manufacturer of strategic missiles. RC 15P118М was developed by Yuzhnoye GKB named after M.K. Yangel and was mass-produced at PA “South Machine-Building Plant named after A.M. Makarova "(Dnepropetrovsk, Ukraine). The warranty period of operation of the Republic of Kazakhstan, adopted by the Strategic Missile Forces during the period 1988 – 1992, is 15 years. Plans to extend the warranty period of the RS-2022 "Voevoda" to the 20, which are in service of the Strategic Missile Forces, were announced by the command of the branch of the military at the end of 2012. However, according to data from open sources, a new heavy liquid-propellant rocket is currently being developed in Russia, which should replace the PC-20.

Ctrl Enter
Noticed oshЫbku Highlight text and press. Ctrl + Enter
We are
Crusade upgrades: the West intends to extend the life of their military equipment
65 comments
Information
Dear reader, to leave comments on the publication, you must to register.